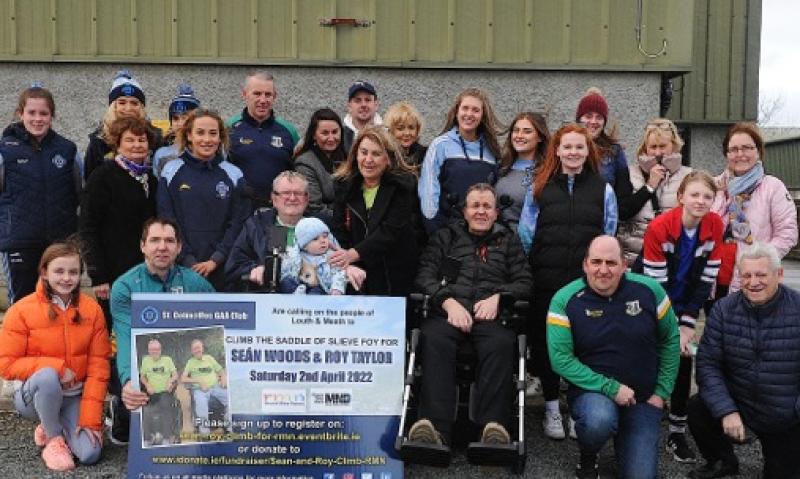 It's just a month away until a group of people from Louth and Meath are to climb Slieve Foy in north Louth, for two men suffering from Motor Neurone Disease (MND) and to help raise funds to support Research Motor Neurone at Trinity College Dublin, where they are working on better understanding the causes of MND.

Paula Lavin, Senior Manager of St Colmcille’s Ladies GFC and teacher in Coláiste Rís, along with Cllr Maeve Yore and Garda Lisa Smith, are calling on the people of Louth and Meath to come out and climb the saddle of Slieve Foy for Seán Woods and Roy Taylor on Saturday 2 April.

Seán Woods and Roy Taylor are both living with Motor Neurone Disease (MND) and are well-known figures within the community of Louth and further afield. Seán Woods is known for his brilliance as a mechanic for over forty years and is much loved in motor racing circles. The Dundalk man is an accomplished racing driver and former team owner, a role in which he was equally as successful.

Roy Taylor is no stranger to the limelight either, having represented Ireland in the Eurovision song contest in 1988 with his band Jump the Gun. He also released the song, “My New Dream” with his son Terence, which reached number one in the iTunes charts in Ireland. The song was aimed at raising awareness for MND and funds to aid research into the condition.

Paula told the Dundalk Democrat that there are around 30 to 40 people in the Louth/Meath/North East with MND. She explains that funds raised from the climb will go to support Research Motor Neurone at Trinity College Dublin, where they are working on better understanding the causes of MND; finding better ways to diagnose patients more quickly, and more effectively; and delivering new effective treatments.

Paula says that a new, prestigious research programme called Precision – ALS, fronted by Professor Orla Hardiman at Trinity College, will now focus on delivering these goals as an end to MND is sought, “once and for all”. She adds that “with the public’s amazing support, we will be able to fund this world class research.

“One day soon, we will be able to get the right drug to the right patient at the right time and give much needed hope to those suffering from MND and their families.”

Lisa, wife of Roy Taylor says of MND that, “it’s a life changing disease, it can only be described as a horror story from hell.

“It changes life completely not only for the sufferer, but also for the entire family. Every minute of every day is consumed by the incredible pain and suffering it causes. For the sufferer there is unimaginable pain being trapped in a body that doesn’t function anymore, and for their loved one the deepest sadness and stress knowing with all the help you can give, this disease keeps pushing you further,” she adds

Paula says that it is Seán and Roy’s wish that all funds from this event go directly into research.

“We hope we can achieve this by selling 500 tickets at €20 each, and raise €10k for Research Motor Neurone. All tickets are available online: sean-roy-climb-for-rmn.eventbrite.ie

A committee of Paula Lavin, Cllr Maeve Yore and Garda Lisa Mc Cabe has been set up to organise the event and Paula says that “great work has been done already to ensure this day is a success for all involved”.

“Jock Mc Ardle has also got involved and is a great addition, for he is an experienced guide and will be out with all his crew on the day leading us in the right direction”, says Paula. Thanks to all those who have registered and donated to the event so far, and to Seamus at Anchor Tours who will provide free shuttle buses on the day, and to Richard and Jamie at print express for their kind donations of free posters”, she adds.

Cllr Maeve Yore also adds that “the families want to thank the HSE for their ongoing support and are overwhelmed by the kindness and generosity of their local community and friends. "They want to also acknowledge with gratitude the help of Garda Lisa McCabe, Carlingford Garda Station; Jock McArdle and his Leaders; Louth Civil Defence; and the Order of Malta in volunteering for this Research Motor Neurone Fundraising Walk on behalf of Seán and Roy.”

Paula ends by asking that people and their communities sign up and register for the event. “Whether you end up going on the day or not, please buy a ticket as we all can make a difference here”, she asks. "This climb is about awareness of Research Motor Neurone, no level of fitness is required so let’s come together on Saturday April 2nd and make this a memorable day for Seán, Roy and their families.”