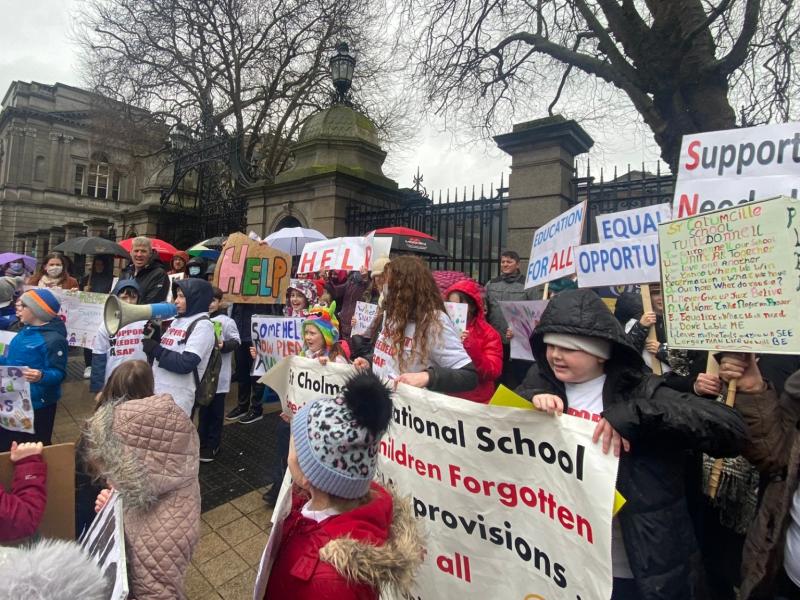 Pupils from Scoil Naomh Cholmcille in Tullydonnell, Togher, Co. Louth, held a protest at the gates of Leinster House yesterday, against a lack of Special Needs Assistants (SNA's) for their school.

School Principal Anne-Marie Ford, shared some of the details of the protest on her social media channels following the protest. In one Tweet sent by Principal Ford, she said that "The children asked, ‘Mrs. Ford, why do we have to beg?’ Why indeed?".

Following the protest, Louth TD, Fergus O'Dowd said in a statement that, "the Minister of State with responsibility for Special Education and Inclusion, Josepha Madigan, accompanied me and my colleagues Senator John McGahon and Cllr Paula Butterly to meet with the Scoil Naomh Cholmcille Principal, Anne Marie Ford, on Wednesday afternoon at the gates of Leinster House.

"The Minister and I also met with a number of the families and agreed to follow up the matter expeditiously with the NCSE(National Council for Special Education) and the school.

"Once this NCSE meeting has taken place, I will be pressing for a suitable outcome that fully meets the needs of the children in the school. I will continue to fully support the school and the parents council in their campaign for appropriate supports to be put in place", Deputy O'Dowd added.

Principal Anne-Marie Ford, Councillor Paula Butterly and pupils from SN Cholmcille seeking much needed resources outside the Dáil yesterday. The children asked, ‘ Mrs. Ford, why do we have to beg?’ Why indeed? pic.twitter.com/xq5YEDX0nj

Spent the afternoon meeting the students, staff and parents of Scoil Naomh Colmcille in Tullydonnell, with Cllr. Paula Butterly and @Fergusodowd TD & Minister @josephamadigan who were protesting outside the Dail about the lack of SNA’s for their school. pic.twitter.com/cuzXQOzWAL