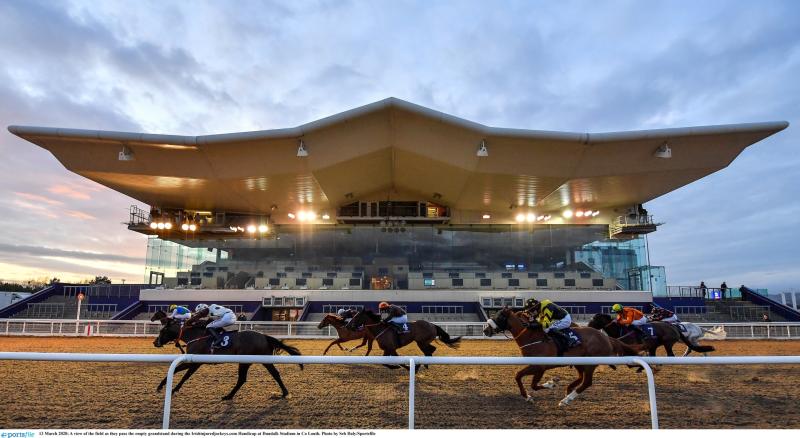 A view of the grandstand at Dundalk Stadium. (Pic: Sportsfile)

There were Dundalk doubles on Friday for trainers Joseph O’Brien and Eddie Lynam.

Joseph has made a flying start to the year at Dundalk and took his Stadium tally for 2022 to six via the wins of Hadman (11/8 fav) in the Join Us On Instagram @dundalk_stadium Race and Boyne River (6/4 fav) in the View Restaurant At Dundalk Stadium Apprentice Maiden.

The winning jockeys, respectively, were Dylan Browne McMonagle and Mikey Sheehy. Congratulations are particularly in order for Dylan as this was his 95th success, which means that the 19 year-old has now ridden out his claim. He can, though, still ride in apprentice races for the remainder of the season.

Like Pretreville, who won at Dundalk on January 21st, Hadman could well be heading to Doha to chase a valuable prize. The winning owners, The Al Mamoura Partnership, hail from that part of the world.

Boyne River is bred to be good. He is by Kingman and is a half-brother to seven winners and is closely related to Danehill Dancer, a top-class two year-old and hugely successful stallion. We will chart his career with interest.

Eddie Lynam’s double cames via Resourceful Man (10/3 fav), who was ridden to victory by Declan McDonogh in the DundalkStadium.com Handicap, and Teddy Boy (17/2), ridden by Danny Sheehy, whose brother Mikey won earlier on the card, in the Floodlit Friday Nights At Dundalk Handicap.

The card had begun with yet another Dundalk success for trainer James McAuley, who also saddled the runner-up, Here And Now, who was sent off a the 13/8 fav for the Irishinjuredjockeys.com Claiming Race.

However, it was 6/1-chance Hightown Heights who came home in front under Sam Ewing, who is mixing jump racing with Dundalk so successfully at present.

After sending out 14 Dundalk winners last year, James moved onto three winners at the Stadium already this year courtesy of this success.

On a night when four favourites obliged, the biggest-priced winner was Dare To Flare (16/1), who beat 18/1-chance Clueless Hill in the Book Online At DundalkStadium.com Handicap.

Trained by Andy Slattery, Dare To Flare was ridden to victory by Cian Horgan, who had also won on First Blood for Joseph O’Brien when he had last ridden at Dundalk (on January 14th). That was his first career success so he has quickly moved on to number two.

A nice aside is that Andy Slattery’s son, Andrew, and his nephews, brothers Ben and Jake Coen, have all ridden winners on Dare To Flare. He’s a lovely horse to have in a yard.

He might be busy readying his team for the Dublin Racing Festival and the Cheltenham Festival but leading jumps trainer Henry de Bromhead has sent out a good number of winners at Dundalk in the last couple of years and you can add Annexation to the list.

Sent off as the 5/2 favourite for the Crowne Plaza Race & Stay Handicap, he made it two wins from three runs at Dundalk in scoring for jockey Chris Hayes, who said afterwards: “He travelled nicely and quickened up well…He seems to enjoy the surface and there could be another nice little pot up here for him. That was nice”.