Dealgan House families vow to continue their fight for the truth 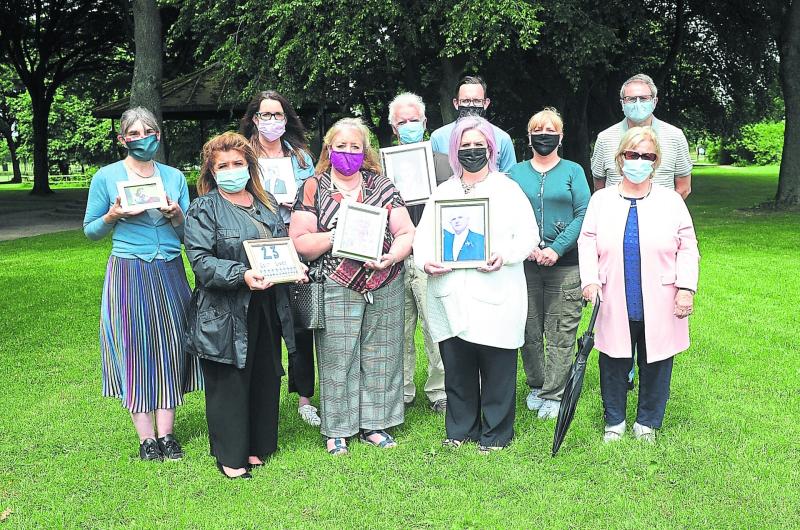 Dealgan House families vow to continue their fight for the truth

Families of the 23 people who lost their lives during a Covid outbreak in Dealgan House Nursing Home in Dundalk in April and May 2020, say they they are ‘not dissuaded’ in their fight to “find out the truth about what happened” to their loved ones.

The families were speaking after comments from Taoiseach Micheál Martin in the Dáil last week cast doubt on a commission of inquiry taking place. The Taoiseach was responding to Louth TD Fergus O'Dowd's request that he establish a commission of inquiry into “all of the circumstances surrounding the deaths of 23 residents from Covid in Dealgan House nursing home in April 2020”.

Responding to Deputy O'Dowd, the Taoiseach said that he is "not convinced that commissions of inquiries are the optimal way to investigate these issues. “They go on much longer than people anticipate or expect." He added that the Department of Health is “examining a variety of options as to how best to respect and meet the needs and concerns of families of those affected.”

In a statement to the Dundalk Democrat, the families, who have mounted a campaign for an inquiry into the deaths, said that “our position remains constant.“ We want to find out the truth about what happened to our loved ones and we need the government to give us a mechanism that enables this.”

The families, who have met with Ministers Stephen Donnelly and Mary Butler at the Department of Health; HSE chief Paul Reid; CEO of the RCSI Hospital Group, Ian Carter and a number of other key players, said their campaign would continue.

“We are not devastated by anything the Taoiseach says and we are certainly not dissuaded by what he says”, they said.

In their statement, that families said that, “We have come to realise that the lives of older people are not afforded the same worth as others, and this is what is disappointing beyond measure. “We are not giving up. We believe that the truth always finds a way. “We believe that the silence and resistance we have met from the upper echelons of government and the health service is unique.”

They continued: “Dealgan House remains the only facility that a hospital group assumed operational control of in the first wave of Covid 19. Documentation we have uncovered shows the HSE and HIQA were aware of staff shortages in the home from April 6 2020.

“The HSE deployed staff to Dealgan House the week of April 6 including a highly experienced nurse. From April 6, 2020, Dealgan was struggling with staffing, while the families remained oblivious to the unfolding crisis. “Indeed, a family was told the day before that Dealgan was ‘running slightly tight but were having a meeting with the HSE the next day, so they should be OK’.

The families say they are seeking answers to the following questions:

“Why did it take five more days for the RCSI Hospital Group to assume operational control?”

“Why was it necessary to do this?”

“What finally prompted them to take this exceptional step?”

The families said that, “While we have worked hard over the last two years to get access to as much information as we can, we cannot reconcile many of the various narratives given by the former owners of Dealgan, the HSE, HIQA, the RCSI and others. “We require a mechanism whereby this information, and a lot which has not been given to us, is looked at and the truth finally found”, they added.

Supporting the families calls for a commission of inquiry, Deputy Fergus O'Dowd has said that it is essential to find the truth on the significant loss of life in Dealgan House Nursing Home, and that “anything less than an inquiry would be an entirely unacceptable outcome.”

In a statement to the Dundalk Democrat, Deputy O'Dowd said that, “Dealgan was the only home out of 460 nationally that was taken over by the HSE in April 2020 as the situation had become so desperate for residents."

“HSE reports indicate that on the 7th of April the Nursing Home had no GP physically in the building and that GPs would not come into the building due to Covid, also that staff and management were seemingly overwhelmed and staffing levels did not appear adequate.”

He continued: “Anything less than a full investigation into Dealgan House would be a grave error in my opinion, the family need the full unedited facts that led to the terrible loss of life of 23 residents during the initial wave.

“I will be strongly campaigning that a commission of enquiry similar to that of Leas Cross be established with a short defined timeline, we already have possession of a number of incredibly concerning reports which were sought through Freedom of Information requests.

“We now require the power to compel witnesses to present and provide their insight so that we can finally to get to the bottom of what exactly took place.”

Deputy O’Dowd added, “the families must be placed front and centre in any enquiry. “We can have no more excuses, no more procrastination, the truth must be told and families must be heard.”