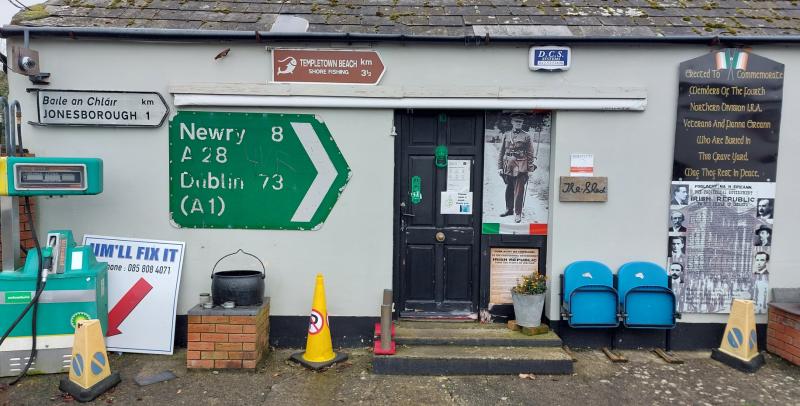 When you first enter Pat Kelly’s Shed just off the Armagh Road, it’s hard to know where to look first.

You’re first greeted by four mannequins: two wearing the uniforms of the Irish army, one wearing a full RUC uniform and another wearing what could only be described as the unofficial uniform of the provisional IRA.

Your attention is next drawn to a selection of decommissioned rifles, one from 1895 and an old WWI British army Lee-Enfield among them.

“I dug that one up when I was doing some work down at Dundalk Rugby club,” he says, pointing to the 1895. “ I saw this bit of metal sticking out of the ground and pulled it up.”

This is the first of many snippets of information that make hearing how he came to own various pieces just as interesting as the pieces themselves.

On a shelf below the gun sits an old sword found, he says, after the dredging of Dundalk harbour many moons ago.

He shows me some sort of leather holster dropped by an RUC man getting into his patrol car in Crossmaglen and picked up by a local.

Pat can’t exactly remember when he started collecting these pieces; he says it just sort of accumulated in the house until his wife told him to take it all out to the shed. And so, the Museum of the Border was born.

The building itself has its own history. It used to be an old workshop. Some of the beams were taken from the old Kilkerley church when it was refurbished sixty or more years ago.

He’s had many visitors over the years, including Gerry Adams and Dromiskin’s own Mary Wallopers have recorded sessions in the shed.

There are boards upon boards of cut and pasted newspaper articles detailing various events that happened around the border during the troubles.

Pat beckons to one with a “have a read of that.”

The browned newspaper clipping details the questioning of one Pat Kelly by the Gardai in relation to the kidnapping of Shergar, “they took me in for questioning after my horsebox was stolen and used, ‘’ he laughs.

And that is the thing about Pat’s shed. It is a personal history as much as a regional one.

Another clipping from the late 70s shows a younger Pat operating a JCB busy removing barricades put up by the British army on one of the many concession roads that wind through the border area.

“We’d dig them up and the Brits would come back and put them up again,” he tells me.

The cycle continued until one day while in the cab of the JCB he looked up and noticed the lads around him had scattered leaving him face to face with a member of the paratroopers who kindly asked him to leave if he enjoyed having his head on his shoulders.

The tour can go from the comical to the solemn with a turn of the head. Outside on the shed’s wall is a road sign taken from around the location of the Miami Showband massacre with a crude stenciled “UVF” carved into it.

One book on Pat’s shelves shows the injuries caused by an IRA bomb. On one of the walls hangs a copy of a letter sent by a 23-year-old anti treaty fighter to his mother before he was due to be executed in 1923.

A mahogany spinning wheel remarkable in its craftsmanship sits in a corner, the efforts of a prisoner held in Portlaoise prison.

Pat plays a recording made by a man in Crossmaglen during a gun battle between the British army and IRA. Turned up to full volume the rattle of machine gun fire and distant explosions give a sense of what many lived through for decades in the border town.

Although it may be obvious what side of the Nationalist/Unionist divide he comes down on, Pat is adamant that both sides are represented, he shows me an Orange man’s sash, “it’s all part of history” he says, “history isn’t just one side.”

It’s clear that he has a genuine affinity for his artefacts, not willing to part with them even when offered sizable amounts by some visitors.

Pick up a piece and ask him about its history and where he got it and he’s away, expanding and expounding.

It is this passion that makes the museum a worthwhile visit.

In the great tradition of Irish oral history, his stories are more alive than any musty plaque.

He is more engaging than any tour guide detailing events they are far removed from.

And it is this that Pat says is his purpose.

He’s eager to pass on this information and these stories to a younger generation and wants them to visit his museum.

“As long as they give me a call ahead of time it’s open to everyone free of charge,” he says.

Survey finds 73% of Louth people intend to return to offices