Ships that sailed from Greenore - Peter Kavanagh's Trip Through Time 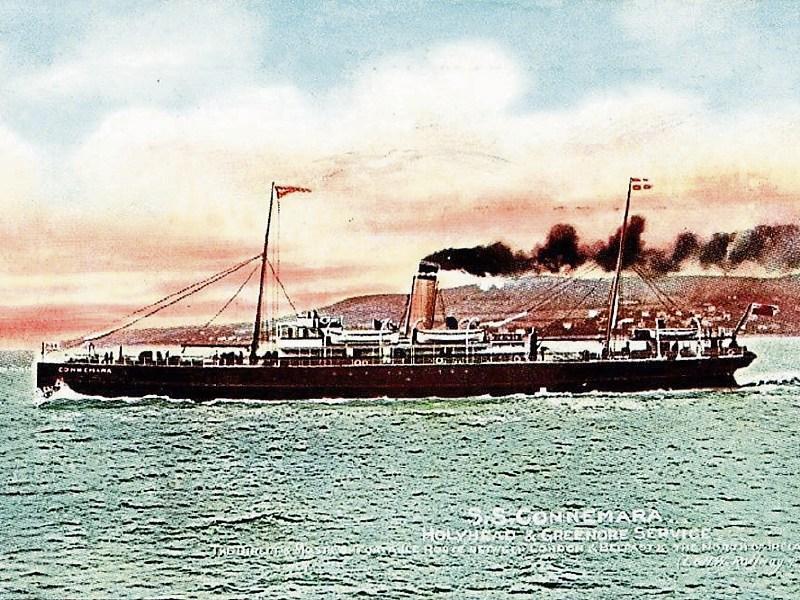 Ships that sailed from Greenore - Peter Kavanagh's Trip Through Time

When writing the article last week about my memories of the last train that ran to Greenore from Dundalk on the night of December 31, 1951, I came across a series of articles written by Tom McDevitte, an old G.N.R. Railway Works clerk who lived in Castle Road for many years after he married a local 'Miss O'Neill', about Greenore Port.

As some readers may already know Tom wrote a series of articles for the Dundalk Democrat over a period of nearly seventy years under the pen name 'Roamer' which were greatly admired and loved by readers of the Democrat.

He achived even greater fame as a broadcaster, both north and south of the Border, first on the radio and later on tevlevision when acting as the fictional comic character 'Barney McCoole of Coolaghy'.

Older readers may recall those broadcasts which were as popular in their day as the the present day sketches 'Mrs. Brown's Boys' and one has to wonder, if he had lived at later time, would he have become famous as a T.V. star and amassed a fortune?

Tom wrote those sketches himself when he was living in a flat in Stapleton Place before he married. I do not think he was paid very much, if anything, for those writings by what was then known as Radio Eireann - he probably only got appearance fees, which were only a matter of a few pounds and there was no sponsorship in those days from advertising agencies!

To paraphrase William Shakespeare when he wrote of Lady Macbeth in his 'Scottish Play' – 'He should have lived hereafter'!
What I admired most about Tom McDevitte was the quality of his writing; he was a master of the use of the vernacular of the ordinary people and I had always assumed that he had studied literature in some great Third Level institute before he got a job with the G.N.R.

I was amazed therefore when he told me that he had left school at the age of 14; but explained that he had a great primary school teacher. Which illustrates the truth in the adage 'There is a book in everybody!' That idea, however, should not be taken too literally and might be better expressed as 'Everybody has interesting writing in them'.

Young writers might be well advised to think, instead, that they should chose the medium which they find easiest to express; whether it be prose, poetry or even writing dialogue.

To get back to the story of the closure of the Greenore railway line, however, after Tom had retired as a traffic manager for Northern Railways, he wrote about this memories of Greenore Port as it was before 1950 and he has made me reflect what Greenore Port might have meant to the country if it had not been closed down in the 1950s.

This is something that I had not realised when recalling the present day problems of traffic on our crowded roads, especially with the advent of Brexit which it just beginning to effect our way of living in Ireland!

In the third of three articles written by 'Roamer' for the Democrat in 1977 about the closure of the Dundalk, Newry, Greenore railway lines 25 years earlier he states – 'The Port of Greenore was the first Railway Port built in Ireland and was served by the best ships of any Irish Sea route. In fact, they were the envy of passengers on other routes, such as Dundalk to Liverpool.'

He goes on to name the various steam ships that plied between Greenore and Holyhead and writes --- 'As early as 1877 there was a weekly sailing between from Greenore to Douglas (Isle of Man) and some years also a a summer service from Warrenpoint to Douglas. The L.N.W. company in England issued circular tour tickets from any for their stations to Greenore or Warrenpoint, via Holyhead, which allowed passengers to return, via Douglas and Liverpool, by the Isle of Man Steam Packet vessels'.

In another part of the articles, Tom makes the point that the sea distance between Greenore and Holyhead was 75 miles, which was just half the distances on the routes between either Dublin or Belfast to Liverpool, which was a very important consideration for both passengers and freight traffic, much of which was live animals, between Ireland and the island of Great Britain before the creation of the Border!

How important a consideration might this have been today, in relation to the Brexit negotiations, if the railway between Dundalk and Greenore had remained in place?

Another thing that Roamer mentions in his articles about that Last Night Train seventy years ago was that there had been a sailing of ship carrying passengers and freight from Greenore to Holyhead 48 hours before that memorable night so long ago! He writes that --- 'The good ship 'Slieve League' steamed out of Greenore Harbour for the last time on 29th December , 1951'.