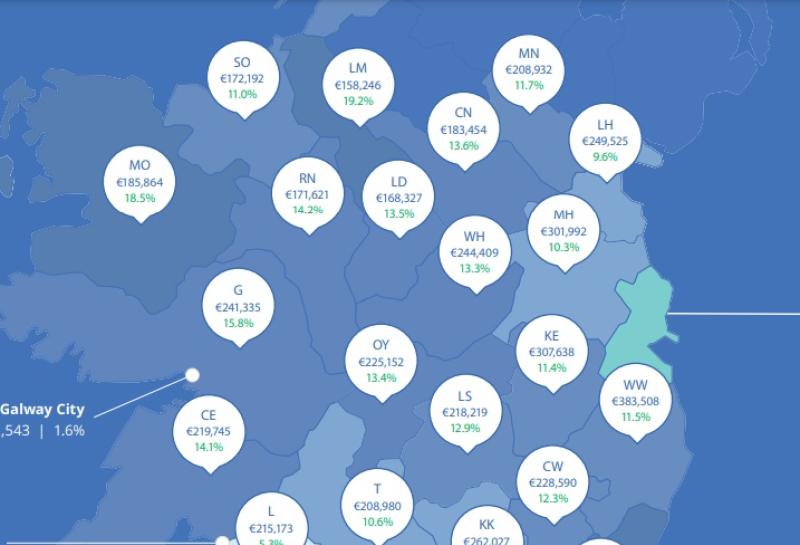 House prices in Louth have risen by 9.6% in the past 12 months, with the average house price in the county now standing at €249,525, according to the Daft.ie, Irish House Price Report Q4 2021, released today.

The Irish property website publishes its house price report on a quarterly basis, and the report for the final four months of 2021 indicates that listed prices in Leinster (excluding Dublin) have seen a year on year rise of 11.9%.

Focusing on Louth, the average house price of €249,525, shows that house prices in the county have now increased by 95.7% from their lowest price during the recession. The largest increase in Louth has been in the price of 3 bedsemi-detached houses, which saw a rise of 14.1%, averaging now at €195,000.

A breakdown of average house prices in Louth are as follows:

There was a 94% increase in the number of new homes sold in Louth in the past 12 month according to the report, with 272 transactions.

Nationally, prices in the fourth quarter of 2021 were 7.7% higher than the same period a year previously, with the greatest gains being seen in rural Ireland. The biggest driver in the rise in house prices has been attributed to lack of supply.

According to the Daft.ie report, the number of houses available in the country is at an all time low. The total number of properties available to buy on December 1 2021, was just 11,483, down by almost 4,000 from the same period in 2020 and the lowest on record in a series dating back to January 2007.

In Leinster, there were just under 2,650 properties on the market (outside Dublin) on December 1, down 28% from over 3,700 on the same date a year ago and a new low for the series.

Commenting on the report, Ronan Lyons, Associate Professor in Economics Trinity College Dublin, said, “the main takeaway looking back at the year that was 2021 is perhaps instead a similarity across markets rather than differences between them. Fewer than 11,500 homes were available to buy online on December 1st, the lowest figure recorded since the rise of online listings at the end of the last bubble.

"In most parts of the country, the number of homes available to buy at the start of the month was at an all-time low. In Dublin, that was not the case ‐ but only because Dublin has been struggling with huge shortages of housing since 2015."

He adds that: ”Covid19 has shaken up Ireland’s housing market – that is for sure – but the underlying dynamic of weak supply given strong demand hasn’t gone away. While supply seems set to improve over coming years, easing pressure in the market, we will no doubt see more signs of a system under pressure before things turn.”