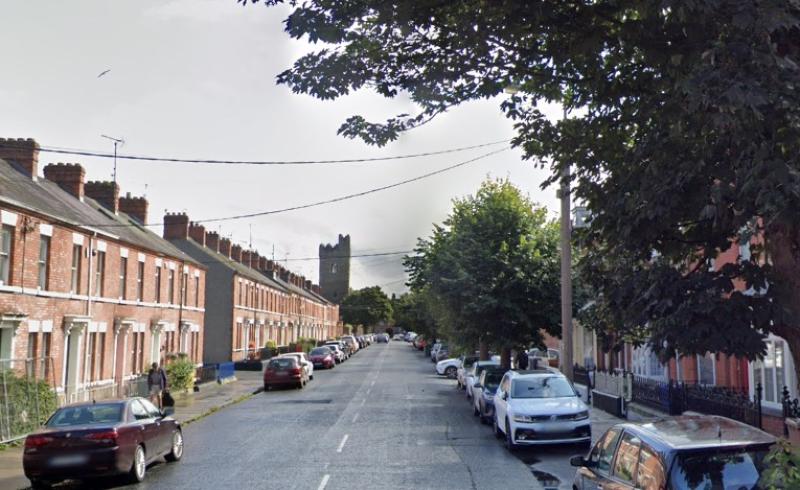 In relation the street that runs from the Jocelyn Street/Seatown Place junction to St. Helena Park, the history of it is a strange one. It did not exist before the late 18th century and it's official name now is Bóthar na Mainistreach (Monastery Road); and there is no castle near it --- the structure the local people call 'The Castle' is actually the bell-tower of a Franciscan church that was built on the site in the 12th century.

That part of the road between the bell-tower and St. Mary's Road was built over the mud-flats that were part of the old harbour where a quay was built for steam packet ships around the time the Act of Union in 1800.

According to the 'Book of Dundalk', the Horse Fair was held along this roadway before the Fair Green was opened by the Town Commissioners in 1865 for fairs and markets.

It was known as 'Castle Street' from the first houses along it were built in the 1830s and only became known as 'Castle Road' in the 1920s. There is still a short part of it called 'Castle Street', between Jocelyn Street and the Seatown/Mill Street junction but, strangely Tempest Annual of 1919 refers to the road as 'Castle Avenue' but this might be a misprint.

I mentioned that I knew a lot of people who lived along it --- My late brother Paul's in-laws were the Brennan family who lived in No. 33 and their next-door neighbours were the Gartlans where there sons went to the same school as myself and I spent a lot of time in their home where their mother was an excellent host.

Another house in the street I knew well, at least from the outside, was No. 14 where James McArdle lived; it was also the home of his sister Mary McArdle who was one of my first Primary School teachers and of whom I have very fond memories. This house was marked by two small privet bushes that had been trained to grow in a spiral design which would not have been very common in Dundalk of the period.

Perhaps the most famous house in the street, however, is the one on the corner with St. Brigid's Terrace (or 'Happy Valley' as it was know locally) where internationally famous architect/engineer, Peter Rice, grew up --- although he was not born there, as the blue plaque on the side wall indicates. Peter was a son of the C.E.O. of the Louth Vocational Educational Committee at the time and was born in a Dublin nursing home while his family was living in a house in St. Mary's Road.

Many other locally prominent persons lived in houses in Castle Road, including Maurice Sellers, Dundalk Town Surveyor for many years, J.F. Doris, another Dundalk Engineer and the 'Democrat's' own Tom McDevitt who wrote the 'Roamer' notes for many years.

One of the most remarkable things about residents of Castle Road was that many people of differing religious faiths and conflicting political opinions but lived together in peace and harmony for many years!