The 'Wee Santa' has returned - Peter Kavanagh's Trip Through Time 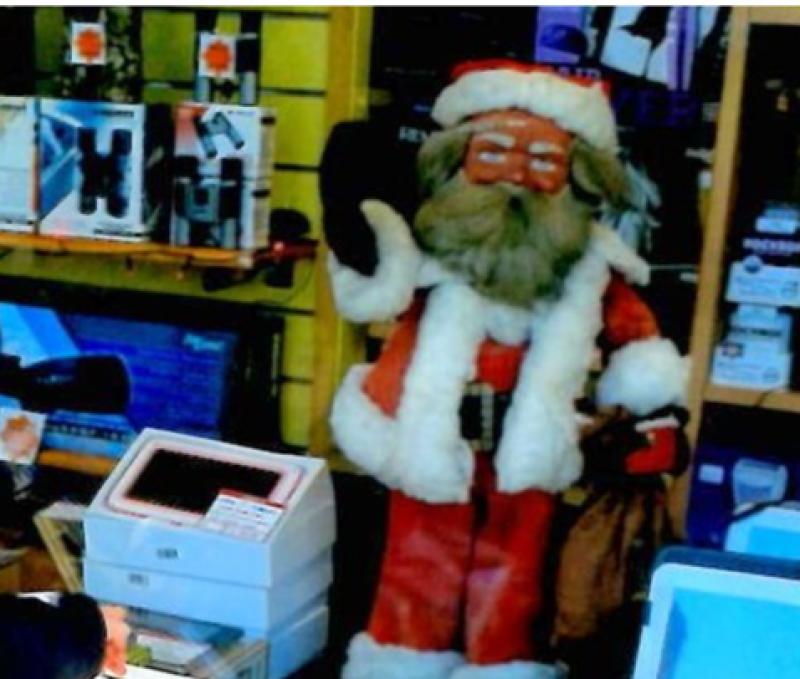 It being the Festive Season in very strange times, after nearly two long years of the Covid pandemic restrictions, my spirits were greatly raised when I was making my way down Clanbrassil Street last week and spotted the figure of 'Wee Santa' back in his place of honour in Leavy's Chemist shop window.

Young people of present day Dundalk may find it difficult to understand what that little figure meant to the children of the Dundalk 'Emergency' period. The little figure was not exactly the same 'Wee Santa' of long ago but I believe many of my older readers will know exactly what I am referring to!

The original 'Wee Santa' was an automaton that first made its appearance in this location in the early 1930s, purchased by RM. Leavy after he and his wife had set up business in historic premises about 1930. This was a time in Dundalk before television and even for many families radio broadcasting and anything that moved of its own accord was a wonder to customers --- but especially to children!

Earlier Daniel O'Connell had spoken at a function in his honour in what then known as 'Carton's Hotel'. The building became famous again in July 1922 when there was a bank raid on what was then a temporary branch of the Munster and Leinster Bank while their new premises on the other side of the Post Office were being constructed. The raid was carried out by members of the 4th Northern Division of the I.R.A. who were opposing the Treaty but their Commander Frank Aiken famously made them hand back the stolen money.

Incidently, when the Leavy family took over the building, part of it was also used as a dentist's surgery by someone who is referred to as 'P. Leavy' in Tempest's Annual but is elsewhere named as 'J. Leavy' so I am not sure exactly what relation he was to the pharmacist.

I was seated in a 'go-car', as a child's buggy was called in those days, when my mother first took me to see 'Leavy's Santa', so readers will realise that it happened very many years ago. I was very impressed and always looked forward to seeing Father Christmas there for many more years.

In my turn, I took my own children, as well as nephews and nieces, to view 'Wee Santa' in later years and recall their reaction was always one of excitement and joy. One of my nieces called him 'Bold Santa' because of the way he gave the plate glass window a whack with his stick --- but she seemed to love him in spite of this!

You may understand then, the reason I consider it as an occasion of joy and hope for future generations of children that 'Wee Santa' has made his return after missing a few Christmases!