Christmas comes early for Gaisce thanks to Louth youth group 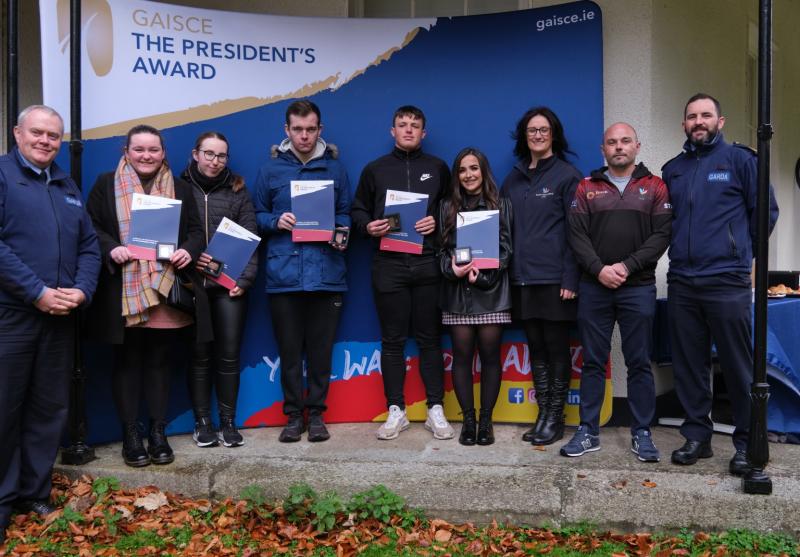 A local Louth youth group has gifted a handcrafted ‘Just a Minute’ bench to the Gaisce (The President’s Award) office in Ratra House in honour of the organisation’s 35th anniversary.

The group initially started out training in woodwork and refurbishment before settling on producing mindfulness benches for designated spaces within their local community in Drogheda.

A number of different spaces were identified by the group to receive a bench, including the Gaisce office in the Phoenix Park, Dublin, as members of the group were working towards their Bronze Awards.

Delighted with their community-led venture, Youth Worker Keith O’Hagan from South Side Youth Project contacted Gaisce on behalf of the young people to explain the idea behind the benches and the aim of the project.

While Storm Barra forced a slight postponement on an official presentation, on Thursday, 9th December, six members of the group travelled to Gaisce offices in Dublin to personally deliver the bench to the staff, including CEO Yvonne McKenna.

Each bench takes between one to two weeks to construct with materials costing €70 and the group are hoping to have their fourth bench completed by the New Year.

Explaining the motivation behind the project, Youth Worker, Keith O’Hagan, who is also a President Award Leader with Gaisce, said:

“These young people went from learning simple woodwork skills to making benches and being active citizens by promoting good mental health in the community.

“They also supported others as peer mentors by leading and facilitating groups by making spaces for younger members to make bird houses and keep safe boxes as well as using their pallet furniture in Gaisce’s recent ‘Bulbs for Bees’ challenge.

“This is next-level work, and it was all influenced by being a participant with Gaisce.

While at Ratra House, five young people in the group were also presented with their Bronze Gaisce Awards.

A further three young people who couldn’t make the trip to Dublin were also awarded their Bronze Awards.

Support for the project came from local Community Gardaí in Drogheda with Garda Aidan and Garda Paddy even making the trip to Dublin to congratulate the young people on receiving their Bronze Awards.

“We are just so thrilled to be presented with this beautiful bench - a piece of art in and of itself - marking the milestone of Gaisce.

“Gaisce is a self-development award and is Ireland’s highest national recognition of all the commitment and positive contributions our young people make in the local community.

“The Gaisce Award is for any young person 14-25, and it’s non-competitive.

“Gaisce is about creating yourself, not competing with anyone else.

“The young people connected with Youth Work Ireland Louth have really shown skill, determination and creativity in this project, and the bench is a brilliant reflection of that, and will be enjoyed for a long time to come!”