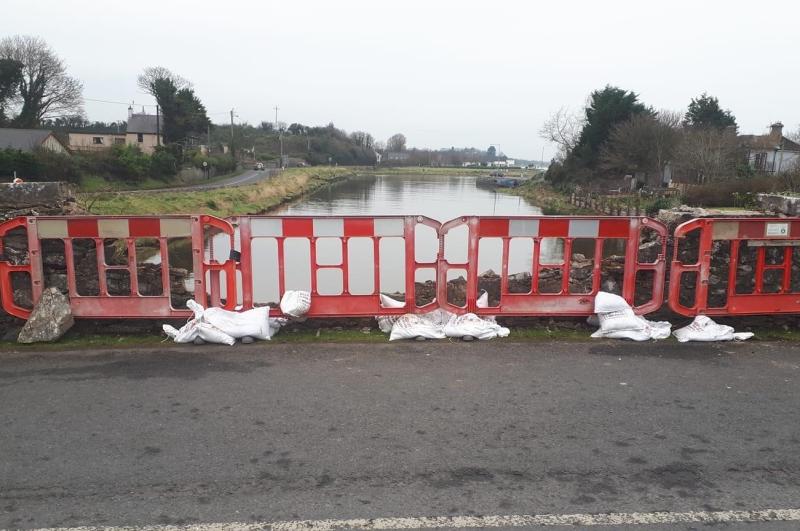 The bridge at Annagassan after the collision last weekend

Sinn Féin Councillor Pearse McGeough has warned that the bridge at Annagassan is in a very precarious state and has advised motorists to approach with extreme caution.

Cllr McGeough raised the issue at the Louth County Council December meeting which took place at St Gerard's Hall in Dundalk on Monday.

The Louth councillor told the meeting of an that incident that took place on Saturday night/Sunday morning when a vehicle hit the bridge, knocking it into the water below. According to Cllr McGeough, the vehicle did not enter the water but some of the stonewall did, with a five metre section of the wall being damaged.

In a statement following the meeting, Cllr McGeough said that the occupants of the vehicle drove off without reporting the accident or the danger it presented.

“I would urge anyone who witnessed the accident or knows the identity of those who drove off without reporting it to immediately contact Gardaí. The accident has left the road very precarious for other road-users.

"At this time of year we could have a snap of frost or ice and although that particular road is on the gritting route, we could end up with treacherous conditions and someone going into the water.

"The council has erected red barrier signs as a temporary measure but I have asked them to ensure the bridge is repaired sooner rather than later. The last time the bridge needed repairs it took a long time for them to be carried out. I would hope it won’t be as long this time.

“Unfortunately, we will need the engineers to come out and also stonemasons to repair the 5 metre section and with it being holiday time we can expect delays. I would ask anyone driving along that route to be aware of the bridge and proceed with extreme caution.”