Dundalk's Shed Side Army blown away by response to food drive 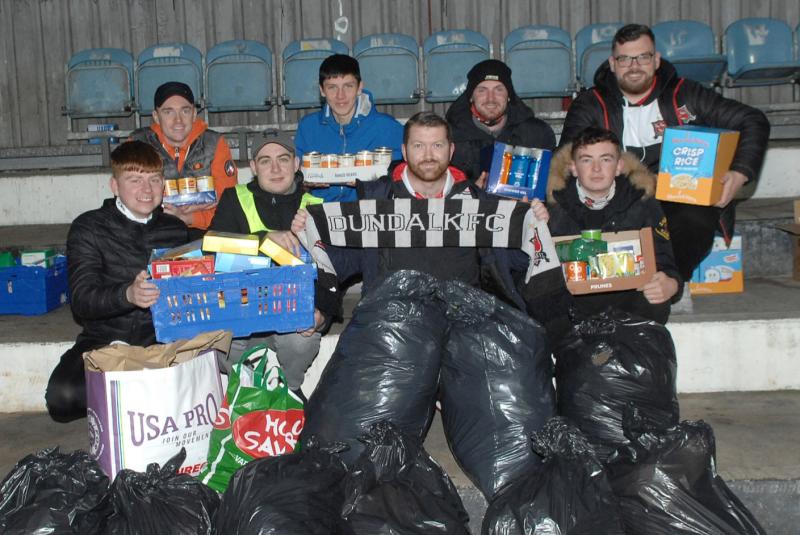 Dundalk FC supporters group, the Shed Side Army, were blown away last week by the huge response from the public, for the Christmas food drive they organised for Dundalk's Simon Community. For four hours over two nights, people flocked to Oriel Park to drop off food, hats, scarves, coats, adult clothing and toiletries, for those in need of some help at Christmas.

“We put the word out there over the weekend through social media”, Jason McKeown, one of the organisers of the initiative, told the Dundalk Democrat, “and the response was fantastic.”

Jason explained, “It came basically from a phone call between me and a friend of mine, Danny O'Connell. “The boys in the Shed were thinking of doing something and I suggested a food drive.”

Jason was amazed at the support from people in the area, “We didn't expect to get half as much as we did. Over the two nights, on the Tuesday and Wednesday night - you're talking only four hours but in them four hours – I couldn't even put a number on the amount of people that showed up.”

“It was young and old, there was Dundalk fans and people who wouldn't even call themselves Dundalk fans, coming up and leaving stuff”, Jason added, “at this time of the year, it's great to see.”

The massive haul of donations was collected by the Simon Community following the food drive for sorting, “so the families will hopefully get it well before Christmas”, said Jason.

Such was the success of the food drive, the Shed Side Army are thinking of making it an annual event. “We've all been through a bit of a tough two years now”, said Jason. “And us being Dundalk fans, we're proud of where we're from, so it's good to give something back to the town.”