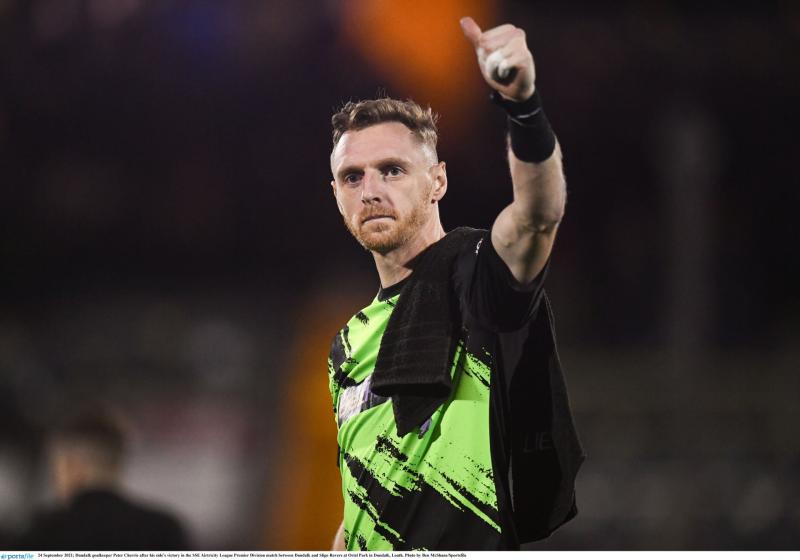 Peter Cherrie says there was a quiet confidence in the Dundalk FC dressing room ahead of their impressive 1-0 win over Shamrock Rovers at Oriel Park on Friday night.

The 38-year-old kept goal for the sixth game running, as Sean Murray’s strike sealed a crucial win which moved The Lilywhites up to sixth in the SSE Airtricity League table.

“It was a great result,” Cherrie told The Democrat afterwards. “The boys knew we were going to have to dig in coming up against Shamrock Rovers. We were quietly confident we could come here and get a result at home, especially with that crowd. For myself, it’s great to be playing in the team, playing quite well and making a save here and there.”

With Dundalk 1-0 up, Rovers pressed for a leveller, and their best chance of the night fell to Dylan Watts, whose shot on the stroke of half-time was brilliantly saved by Cherrie.

“That’s what I’m here to do,” added the veteran stopper. “The boys were saying ‘what were you doing trying to catch it’ because that’s the way it looked, but believe you and me, I wasn’t! I do that every day (in training) and I’m glad I can show the people that I can still do it because people harp on about age and what have you.

“The second half was quite quiet for me personally, but that’s down to the lads in front of me. They snuffed out everything – through balls, high balls, whatever it was and the little bits and pieces I had to do in the second half, I done.”

Cherrie initially joined the club from Clyde in his native Scotland back in 2009 and would stay at Oriel until 2014, as spells with Cliftonville, Bray Wanderers, Cork City and Derry City preceded his emotional return to Dundalk at the beginning of this season.

Opportunities have been limited in his second spell, but a lack of form in Alessio Abibi and Cameron Yates has given Cherrie an opportunity to prove himself once more.

“Of course I was frustrated, but at the end of the day, it’s not me that makes the decisions. I can only do my job on the training pitch and if it’s good enough, then hopefully I’ll get picked and Vinny (Perth) has stuck by me these past couple of weeks.”

Indeed, the return of Cherrie to the starting line-up has coincided with an immediate upturn of form, with The Lilywhites unbeaten since the Scot returned to the side.

“This club is too big to be where we have been in recent weeks. It’s good to see that bit of fight coming back into the lads. Digging in and showing that crowd the passion they still have and the fight and determination to get this club out of where it was and hopefully on to a better year next year.

Announcement of redundancies and closing of operations at Horseware is 'shocking', says Ó Murchú

CAB has hit almost 2,000 targets in the 25 years since it was established