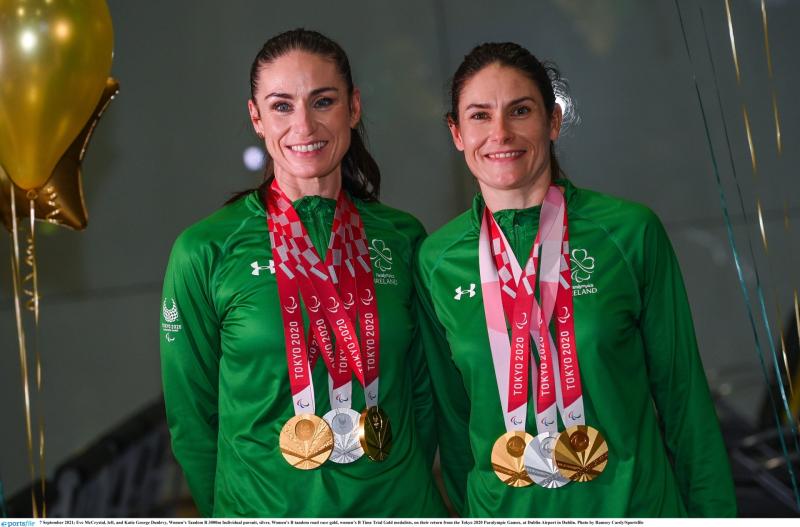 Winning a medal at the Paralympics is a special achievement, the vast majority who make their way to the Games are coming there at their peak condition, many knowing that this may be their one chance at Glory on the world stage.

It cannot be overstressed enough how huge of a task it is just to make it through the grueling sessions of training that make up the Paralympic Cycle, four years of hell before ever enduring the event. Try doing five years as was the case in this weird 2020 edition staged in 2021.

Unlike most athletes who compete but leave empty handed, Dundalk’s Eve McCrystal has sampled success having left Rio with two medals. With two young children to rear, a social life to catch up on, surely that was enough for Eve to retire the bike for a nice warm seat by the fire?

Anyone who thought this has clearly not met the 43-year-old cyclist, who has always looked forward to the next race, but never in her wildest dreams could she have envisaged was to come at the heavily delayed Tokyo games.

When speaking to this writer ahead of the games, it was easy to sense both her determination and the confidence that went though her voice. They had trained like never before, with her partner in arms, the partially sighted Katie George Dunleavy relocating to Louth for months of intense training.

Four events to train for, four possible medals and despite only really having success in two of those events it was clear from speaking to her that in every event they would partake in they were expecting to be competitive.

It all began in the early hours of the morning of Aug 26, the duo beginning their games in a 1km sprint race against the clock. They are endurance riders but were they just out for a stroll? These elite performers don’t just come to make up the numbers.

“I’d struggle a lot in the Velodrome with my asthma, there is no point in saying anything different. For me I’d have a huge love/hate relationship with the velodrome, I just have to get out of their in one piece as best I can for the road races” she told the Democrat ahead of this event.

A strong final lap saw the duo slot into sixth position, with a time 1:09.232. This was a significant improvement on Rio where they posted a time of 1:12.33. In an event where the Paralympics record was broken. A sign of things to come.

In their second event, the 3Km Pursuit Race on Aug 28, the pair went in Heat four of five, with the four best times going into the medal races.

They showed their immense form from the start, getting out of the blocks extremely quick. Before the two thirds mark, they were going so well they managed to lap the Polish duo and ended the race in an astounding of 3:19.946.

It was a world record time, one which was sadly usurped by the British pairing of Lora Fachie and Corrine Hall by half a second. This set up a thrilling final where sadly the UK side won comfortably to bag the Gold.

Setting a then new record, claiming a silver despite Eve’s problems working in that indoor environment, the signs were good ahead of their preferred events on the road. Boy were we in for some monumental success.

The 34KM Time Trial has always been their best event, they are multiple time world champions in the discipline and reigning Para Champions from Rio. Yet they were beaten at this years’ worlds. But as they say, there is nothing more dangerous than a wounded animal.

The tandem duo posted a time of 47:32:07 to come home ahead of the British team, of Laura Fachie and Corrine Hall in second by almost a minute. Revenge for their earlier defeat on the track.

Speaking to RTÉ Sport after the race, McCrystal said that once they were five seconds ahead after the first lap, they didn't want to give that up.

"We went for it, and I think after the first lap we were five seconds up," said McCrystal. I think we're better ahead than chasing, so I just said in my head 'I'm not letting this go now', so we just went for it. I just think we're after doing the ride of our lives, I can't believe it."

Two medals, their title as the best in the world regained, time to sit back and take it easy in the final event? Not for this duo who now sensed a chance to become legends back home, not just in Dundalk but across the whole nation.

The final event was the road race, a 95km test of the rider’s strength, durability and race prowess. The race saw them battling it out with three other teams from Britain and Sweden who looked like they were going to be tough to pull away from with a gold medal on the line.

Yet in the final 2KM it was the girls in green who found that extra gear, revelling in the uphill finish to finally pull away by seven seconds with a time of 2:35:53. A third medal, a second gold secured in what is Eve’s final games.

"I just said to Katie with about 2km to go that we're going to have to kick the last little drag up. Because the British bike are the current world champions. I didn't want to take them to the line so we had to chance it” she stated to the media following the hard fought victory.”

"We chanced it, we got a gap, and we just went for it and I cannot believe we did that. Double Paralympic champions - oh my God almighty - never in my wildest dreams!"

Nobody can argue her place now as one of the county’s greatest ever sportswomen. Needless to say she deserves every plaudit.