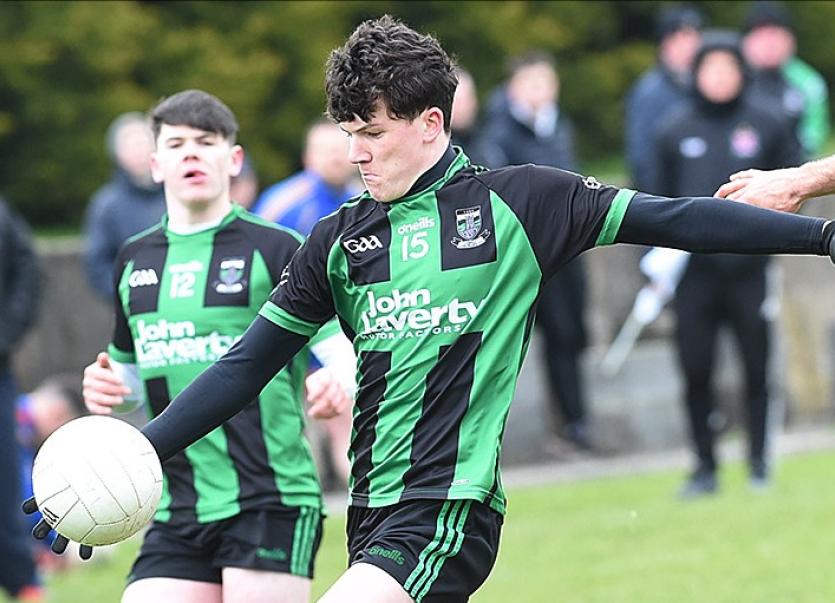 Dundalk Young Irelands got their season off to a winning start with a nine point victory over O’Connells at Pairc Eire Óg on Friday night.

PJ Pendergast got the home side on the board with a point and Cian O’Donoghue got their second not long after. A Robert Quigley free got the visitors first point of the game but the rest of the half was dominated by the Dundalk side.

Two points from Derek Maguire and Jordan O’Donoghue opened the gap to three, 0-4 to 0-1 after 15 minutes. In the next four minutes the Irelanders hit the net three times, through Dermot Mone, Cathal Ferriter and Peter McStravick.

Pendergast and Cian O’Donoghue added two points to their teams tally. Quigley got the Bellingham side’s second point of the half, but Ferriter got the last point before the break leaving his side 3-7 to 0-2 ahead.

The sides shared the first two points of the second half both from frees before the O’Connells landed the next four points, a brace from Quigley and the others from Conor Culligan and Bernard Osborne.

Jordan O’Donoghue got his side’s second point of the half but the visitors replied with a free from Quigley and a great long range effort from Osborne to leave the score 3-9 to 0-9 after 45 minutes.

Dean Maguire put the home side further ahead with a point and O’Connells keeper Stuart Reynolds pulled off the good save to stop the opposition getting their fourth goal of the game. Points from Culligan and Quigley reduced the deficit but Maguire landed the last point of the game to get his team’s league campaign off to a winning start.

The Joes and Roche opened their 2021 League campaign on Sunday in Cluskey Park and in a tight encounter it was Roche who came through by a single point.

The sides exchanged frees in the early stages with Alan McKenna on target with two for the Joes, Kevin Callaghan and Barry O’Hare responding for Roche. Conall Smyth fisted over and Killian Staunton added a point for the Joes to go two up after 10 minutes.

Callaghan replied for the visitors but scores from Conor Neary and Conall Smyth helped the Joes lead by 0-7 to 0-4 at the first water break.

Roche responded well after the restart as points from O’Hare and Shane Byrne helped them cut the gap to one, but Craig Doherty scored the first goal of the game to send the hosts into the dressing rooms leading by 1-10 to 0-10.

Roche began to dominate the midfield exchanges in the second half and their efforts were rewarded when Glen Stewart crashed the ball to the net to cut the gap to one point before the water break.

Barry O’Hare had the sides level but the Joes regained the initiative when Oisin McGuinness grabbed their second goal.

However, Roche upped the pace in the closing stages and a Mark Byrne goal along with points from O’Hare and Byrne saw the Faughart side hold out for a one-point win despite a late score from Conal O’Hanlon.

Oliver Plunketts edged a titanic battle against Naomh Fionnbarra at Mell on Sunday afternoon in the first round of the Division Two League.

Emmet Kelleher’s late point off the bench was enough of a cushion to withstand a Togher fightback led by William Woods after James Guinn and Dean Carolan found the net for the hosts.

The match was a slow burner as the Drogheda men led 1-2 to 0-2 at half time before the dramatic second half finale.

There were goals a plenty in the Gaelic Grounds as the O Raghallaighs claimed victory over St Kevins.

The Drogheda side's ability to find the net in the first half saw them ahead 3-5 to 2-8 at the turn as Lee Crosbie and Patrick Clarke claimed the majors for the Phillipstown men.

Smiley Philips' men did draw level through a Crosbie free but the home side finished with another goal and three points to seal the deal.

A sizzling final quarter from the Dundalk Gaels saw them win in the sun away to Kilkerley Emmets in the pulsating league opener.

Level at eight points apiece at the second half water break, the Dundalk side sprung into action thanks to points from Eanna McArdle and Ger McSorley. Luke Murray added the finishing touches with a goal with three minutes to go.

Kilkerley had the slight edge in the first half but failed to build on a 0-5 to 0-4 half time lead where Ciaran McGlynn landed a fine brace.

Hunterstown Rovers were worthy winners at home to Clan na Gael on Sunday afternoon in a one-sided encounter. Two goals from substitute Colm Murphy in both halves sent Rovers on their way to the full two points.

Ryan Ward and Dean Burns found the net early on to make it 3-5 to 0-3 in their favour at half time. Clans once again relied on Billy Smith to keep them in the game and the full forward fired home a late consolation penalty to provide the scoreline with a favourable gloss.