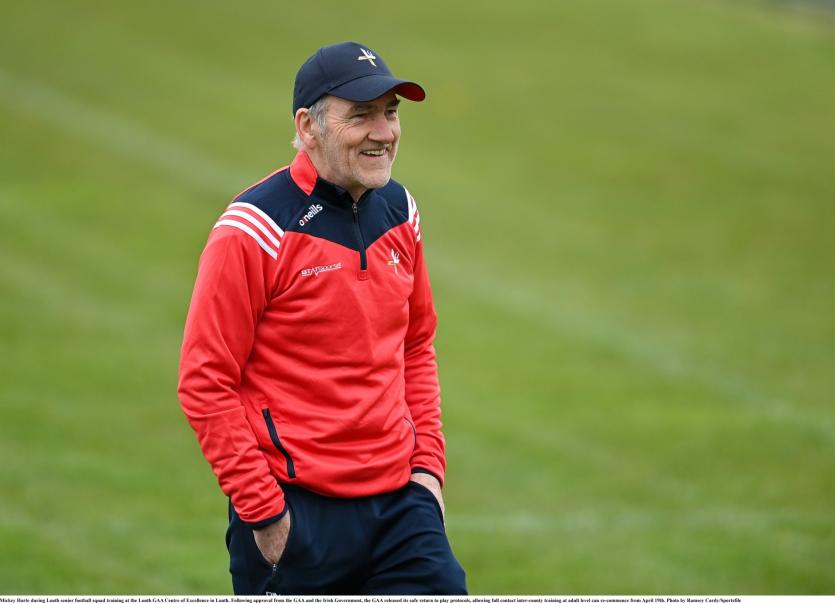 Louth’s steady rate of improvement under the tutelage of Mickey Harte reached a crescendo with the perfect promotion performance on Saturday afternoon over Carlow. The eight-point win did the reds a disservice as they dissected their hosts at will.

Netwatch Cullen Park glistened in the sun as the players circled around Harte in the aftermath of the victory over a foe they have struggled to overcome in recent years, one they have now slayed in their own back garden.

The accomplishment was joyful, the laughter within the circle showed that and signified a renewed unity within the county’s best footballers.

Aptly, just outside that circle again, the players' partners, family and children added a further extension of that achievement by being there. They were part of the 100 allowed in, creating an extra layer to the celebrations.

The thing that stood out the most was the serenity of Louth’s play on what was supposed to be a nervy encounter. A promotion final, away from home, in reality the contest turned out to be a breeze.

Having sized up Carlow early on with probing runs and loose foot passes, Louth went behind to a Colm Hulton effort that was scored after a patient build up. The Wee County were all the while figuring out where the Barrowsiders' weaknesses were.

The Tullyallen man has been a revelation since Harte has come in. His stock even soared when he didn’t play against Antrim in the opener but since he’s come back in, his ball winning ability, his awareness and accuracy has gone through the roof during this current regime.

Another two to benefit from Gavin Devlin and Harte found the target next. Sam Mulroy and Ciaran Downey, with everything at stake, the Blues man had his best game in red.

Louth were enjoying themselves now and Ciaran Byrne drove through the middle and had two goal chances saved before Liam Jackson struck the post in the same goal mouth sequence. This emboldened Carlow to respond through two more points from Hulton.

Without a hint of panic, Louth knuckled down and Bevan Duffy drove the ball over the bar from quite the distance. Mulroy added a ’45 after Ciarán Keenan spurned another goal chance.

Two points ahead at the first water break and Louth were just about to get going. The weaponry of Craig Lynch’s kickout’s added variety to our attacks which were used to devastating effect, outscoring Niall Carew’s side 1-7 to 0-4 in the match winning quarter before half time.

Keenan landed two, Jackson got one on the spin before Byrne found the target with his first, a simple run off Grimes shoulder to clip over the bar.

Byrne would do the exact same thing down the right channel twice more before the end of the first half. Three points in total in an excellent attacking display from the St Mochta’s man.

Directly off a long kick out from Lynch over the top to Mulroy, Byrne gambled, continued his run and was found by Monasterboice man in open space. Byrne learned from his early mishaps to look up and find Grimes at the back stick for a tap in.

The goal came in the 31st minute and the game was effectively over from that point on. Paul Broderick was to Carlow in the second quarter that Hulton was in the first, the former nemesis of Louth’s downfalls in the past landed three terrific scores to make it 1-12 to 0-7 at the turn.

There was a lull in the game after half time, Niall Sharkey who started instead of the injured centre Anthony Williams dropped to corner back and Leonard Grey slotted in at six with Dan Corcoran making way. Those switches had to take time to adjust and Broderick profited with three more scores.

The possible twinge of a dreaded comeback might have been felt in the pit of Louth supporters' stomachs when Keenan was again denied off the line but Josh Moore went up the field to give Carlow supporters some fuel to their voices with a point that felt like a double whammy.

The score was 1-14 to 0-12 at that stage and the water break came just at the right time. Harte refocused his troops and provided them with an assurance of their newly formed belief.

Thanks to Sam Mulroy, Louth outgunned their hosts 0-9 to 1-3 in the final quarter, the captain with five points in an effective display of leadership. Nailing four long range free’s not only sucked the life out of Carlow but the clock too.

Grimes and Downey would add to their tally highlighting Louth’s newfound compliance and synergy all at once as they controlled the game and shut up shop. Jamie Clarke did nick a late penalty for Carlow, providing the scoreboard with a somewhat misleading look.

The Wee County passed this final test with flying colours, trepidation soon turned into comfort as the campaign went on. Hope for next season has been renewed, with the added goal of a higher standard of Division Three football guaranteed for 2022 a massive plus for all Louth Gaels.

Focus no doubt will turn to Championship, but for now, they should bask in the clarity of their attacking play.

Seven out of the front eight Louth players found the target and Declan Byrne impacted with a point off the bench, there was a league debut for Daire Nally thrown in there also. Momentum is growing at a rapid rate. Louth are going up.