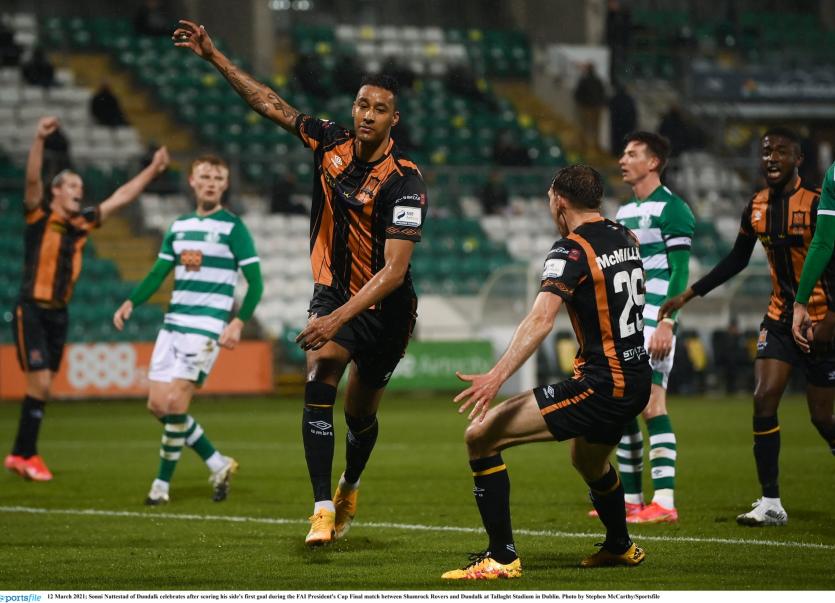 The Faroe Islands international – signed from B36 Torshavn last winter – has played in just two of Dundalk’s 14 league matches thus far due to continuous injury problems.

However, with Chris Shields suspended, and Brian Gartland and Daniel Cleary both out for the foreseeable future, Nattestad looks set to start in defence against Waterford on Friday.

“I’ve been out too many times with injuries, but I’ve been training now the whole week and didn’t feel anything, so hopefully I can play tomorrow.

“I had a couple of small injuries. It’s always small injuries and not big injuries like a calf or groin sometimes. I’ve been pretty unlucky, but I feel fit now and hopefully I can just play the rest of the games.”

Nattestad travelled with the Faroe Islands panel for last week’s international friendly with Iceland, but returned to Ireland in advance of their 5-1 win over Lichtenstein on Monday.

“That was always the plan,” he explained.

“I just went home to do treatment and then train with the team and to get back in shape. That was the only reason I went home actually. I wasn’t supposed to play the games anyway, so that was just to do some rehab and stuff like that.”

Unavailable for selection for Dundalk is Raivis Jurkovskis, who played 60 minutes of Latvia’s 2-1 defeat in Estonia on Thursday evening, while Wilfried Zahibo is in quarantine after playing in both of the Central African Republic’s friendlies against Rwanda this week.

It’s a sign of the times for The Lilywhites, whose squad currently has representation from 12 different nations, but Nattestad says he’s enjoying life in Dundalk despite his rocky start.

“I find it fine,” he said when asked about life in the town. "I come from a place where there’s like 1,000 people living there in my village, so this was actually huge compared to where I’m from, but I’ve been in many countries before.

“I love it. It’s pretty similar to Faroe Islands – the people. They’re so friendly – everybody. It’s actually been really nice just to be here.”

With their next two games against the bottom two, Waterford and Longford Town, Nattestad believes seventh-place Dundalk can close the gap on the top three and qualify for Europe.

Friday’s game is being streamed live on the new LOI TV platform, with commentary being provided by LMFM’s Adrian Taaffe and former Dundalk right-back John Flanagan.