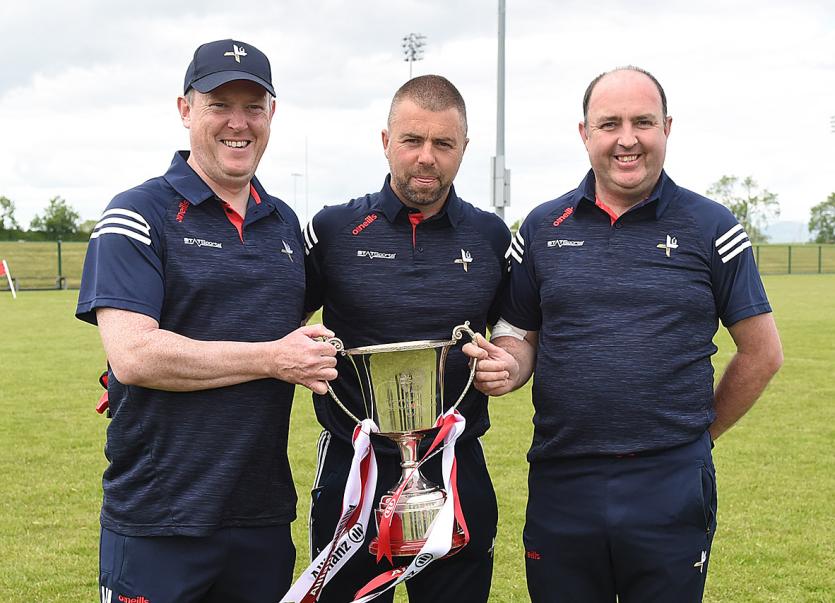 Three wins from three, promotion to Division 3A secured and a fine trophy to boot, there was plenty of reasons for Louth Hurling manager Paul McCormack to be in a jubilant mood as he spoke to reporters in the sunshine of Darver.

He had successfully brought his troops out of the basement of the sport, but in the immediate aftermath of the win it was relief at getting over the line that he expressed most deeply.

I’m just delighted to get a good performance, we felt that was coming” stated a gleaming McCormack. “The last two games really stood to us, eking out tough wins but I believe there was great quality in the squad and that shone through today.”

“Anytime you win a cup you have have that relief but we are just delighted for all the players, the efforts they have put in, buying into the process and the culture we are trying to establish here and I think there is more to come.”

Looking around to the celebrations, the Armagh native couldn’t have felt prouder of his players and was delighted that the occasion was marked by the presence of the new President of the GAA Larry McCarthy who awarded a team with a trophy for the first time since taking up the office.

He knows it is a day they will never forget but is hopeful it will also galvanise them to want to achieve more in the sport ahead of the tougher days and oppositions that may lie ahead.

“We are going to be challenging them to achieve more but it is just a great day all round, there has been a good atmosphere here in Darver. It is great to have the President down, that means a lot that this achievement is recognised.”

“To win a National League medal is something that the lads will hopefully cherish along with their families too as there is a lot of young men out there and hopefully that is a bit of pride for them, whether their relatives were watching at home or were lucky enough to be watching the game here in Darver.”

The tie was a little too close for comfort, with some soft frees throughout the match from Louth allowing the Ulstermen back into the contest anytime the Wee County looked like drawing away.

While needing to eradicate that part of their play, McCormack was happy with the way they were able to finish out strongly, a ten-point cushion overall a fair reflection on the contest.

“In the second half we went five up and then gave them two or three soft points to keep giving them hope and that’s something we have to address, there was a huge period of the second half, maybe six or seven minutes where there was no score”

“Whoever is going to get the next score after that when it’s a two-point gap, it was either going to be one point deficit for Fermanagh or a three-point lead for us. Thankfully, we managed to get that score and it gave us the belief and I felt the last 15 minutes we were completely in control.”

He has never let players think too far ahead, but with the League done and dusted attentions can finally turn to Louth’s fight to retain the Lory Meagher Cup.

Players will now get a break to return to their clubs, before McCormack brings them back in again to work even harder as they look to add further silverware to the Louth mantlepiece.

“We haven’t actually discussed Lory Meagher yet, at this stage it was all about the first game against Leitrim because of the of the long lockdown and how people felt after it, we needed to deal with that first.”

“It is nearly a three week break now, the lads will go back to their clubs, if they want to play some football they can and there were some junior hurling matches on Wednesday and those who didn’t play will hopefully get some gametime there.”

“We have two games against Monaghan and Longford, and we’ll certainly be knuckling down and looking at where they can hurt us along with how we could get better.”