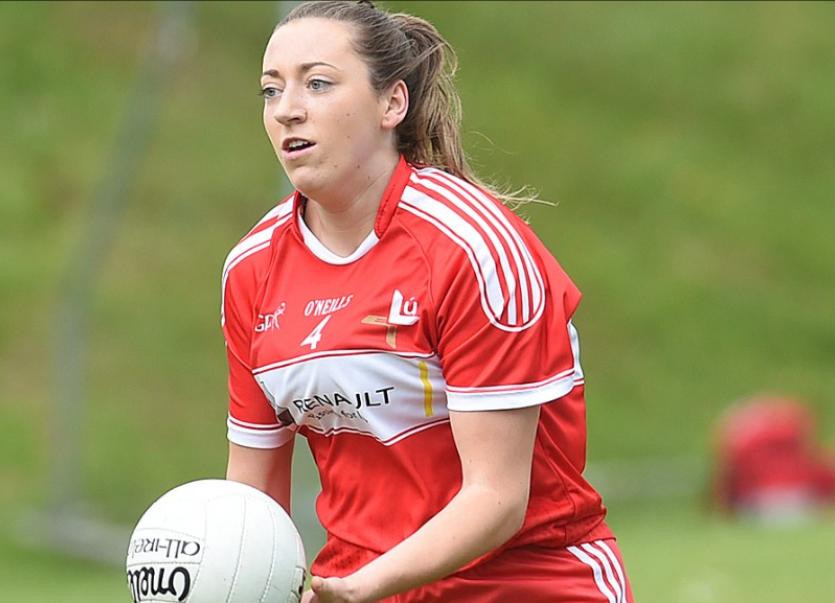 The Clan Na Gael clubwoman was disappointed by the loss last week, but is expecting her side to regroup with a win against Antrim to reignite their promotion challenge

It was build as the clash of the two favourites for promotion, the Louth Ladies making the trip West to take on a Leitrim side determined to get some revenge for their loss a year earlier.

A mix of missed chances alongside some dubious calls that saw Sarah Quinn sinbinned and Eimear Byrne sent off proved pivotal factors, however the immediate feeling was one of disappointment.

Their captain Shannen McLaughlin, who was leading out her county for the first time, felt the final result was a bitter pill to swallow but knows that they need to look to themselves and not the referee as they reflect on the loss.

“It was really disappointing, I think a lot of factors came into it, we had a good first half I thought but a few things just didn’t go our way and it just spiralled from there but I don’t think the score reflected the game” recalled the young defender.

“I think the two cards we tough on us, they came at key points in the game, we were up by two points and then we lost Sarah and I think the red card led to a goal.”

“The result was tough to take but you can’t blame the referee, at the end of the day we are the ones on the pitch and it was Leitrim who scored the points.”

It has left Wayne Freeman’s troops needing a win on Sunday, when they face Antrim at the Clan Na Gael GAA Grounds in Dundalk (Throw in 2PM), a side which they are very familiar with having had many duals in recent seasons.

They last met in last year’s National League, when the girls in red ran out comfortable winners while netting an impressive 3-10 from play. Despite this statistic, McLaughlin is not taking the game for granted given they bagged five goals against Derry last weekend.

“It is the team we have probably played the most in the last number of years, but it’s always a tough game. We know they are a very good team, who are very threatening in the forwards, we will need to be switched on to that but we’ll just have to wait to see what they bring to the table on Sunday.”

“I played in that game last year and it certainly didn’t feel easy on the pitch, they are a really good team and we can’t take anything for granted, we need to win so we have to go out there, stay focused and get the job done.”

Remaining focused will be vital for Louth, as following an opening day loss their promotion hopes are on the line this weekend, another defeat would effectively end any hopes of them playing Division Three football in 2022.

They know what is on the line, given the condensed nature of this year’s competition, but they know the rewards on offer too and are confident that when put under pressure they will show why they were top of the league last season.

“There is definitely pressure on now, ideally we would’ve won the first game, but the situation is what it is and we just need to regroup. We wanted to win every game because of the the way we have been training and what Wayne has asked of us, but we need to show our best in every game.”

“We believe that if we do perform to our top level, we are the best team in Division Four and we just need to get back to our peak form, Antrim are a decent side so we need to turn up on Sunday and we are not taking anything for granted.”

The Clan Na Gael clubwoman will have the honour of leading out her side on Louth soil for the first time this Sunday, a moment which will be extra poignant as it will happen at the ground she has called home over the last few years.

Having only taken up the sport in 2016, she has been blown away by the support the club has given her, with her only regret being those in the Clan family who helped her get to this illustrious stage of her career will not get the chance to be there in person.

“It is incredible the group of girls we have here, to even be on the team in the first place is a privilege let alone to lead them into battle, but it does make it extra special that it is on my home pitch and it is just a shame there is no crowds.”

“It is amazing to get the chance to play at the Clans, hopefully I can do everyone from the club proud, as I know they will be watching. They have been so supportive over the last couple of years since I started playing with them so doing this here, I’m very lucky.”