Dundalk held to a draw as barren run continues in Donegal 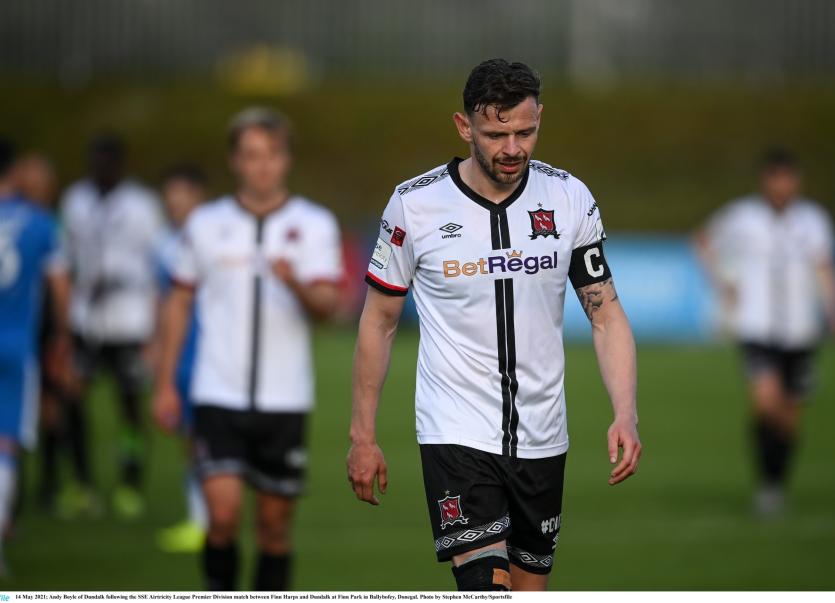 Dundalk FC were held to a 1-1 draw by Finn Harps in Ballybofey on Friday evening.

A truly dreadful first-half display from The Lilywhites was compounded by Barry McNamee’s thunderbolt for Finn Harps, which gave them a deserved lead at the break.

Dundalk had the better of the second half and equalised shortly after the restart, thanks to Ole Erik Midtskogen’s first goal for the club, but try as they might, a winner never materialised.

Finn Harps were the much better side throughout the opening half and they had the game’s first shot when Adam Foley teed up Mark Coyle, but the Harps player fired miles over.

The Donegal side had another chance soon after that when Karl O’Sullivan set up McNamee, but the former Derry City midfielder scuffed his shot harmlessly into Alessio Abibi’s arms.

Harps took a deserved lead on 19 minutes when after some slack defending from Dundalk, McNamee – from the opposite angle – curled a shot which flew into the top left-hand corner.

Ollie Horgan’s side went in search of a second after that and O’Sullivan flashed a shot which deflected inches wide, not long before McNamee had a free-kick attempt sail over the bar.

Dundalk started to up the ante after that and ended the first half strongly, with Han Jeong-Woo sending in a good cross from the left which was headed off target by Michael Duffy.

Playing up front on his own for Dundalk was Midtskogen, but the towering Norwegian striker couldn’t turn home from close range after latching onto Darragh Leahy’s pass.

Dundalk had another chance eight minutes before the break when Raivis Jurkovskis floated in a cross which found Sean Murray, who just couldn’t get enough purchase on his attempt.

Jim Magilton’s side came out of the blocks after the interval and found an equaliser just four minutes after the restart when Midtskogen planted a header home from Duffy’s cross.

It was pretty much all Dundalk for the remainder of proceedings and soon after the equaliser, Duffy curled a shot a mere inches wide, shortly before Murray headed over from a corner.

Jurkovskis floated in a good cross which was headed wide by Wilfried Zahibo, while ten minutes from time, another cross from the Latvian was met by the head of Midtskogen, who forced Harps goalkeeper Mark McGinley into a superb save as he tipped it over the crossbar.

Fresh off the bench, substitute Junior Ogedi-Uzokwe’s slick pass set Duffy on his way, but McGinley quickly came out to deny Dundalk once again, as the game neared its conclusion.

Another sub, Patrick McEleney, floated a free-kick into the box in the last minute of normal, but nor Ryan O’Kane or Greg Sloggett could finish after Sonni Nattestad headed across goal.

Junior had a free-kick attempt brilliantly kept out by McGinley deep into stoppage-time, as Dundalk were denied what would have been a most-welcome three points in Ballybofey.