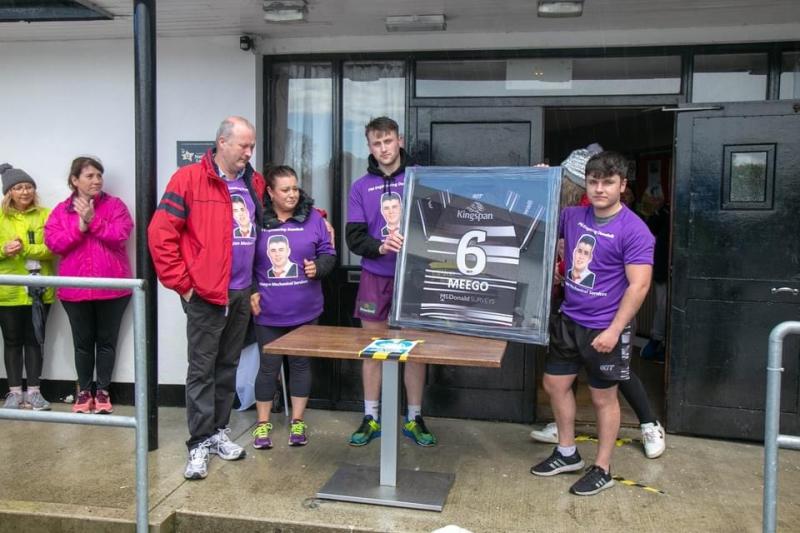 It was a May bank holiday weekend like no other for members of Dundalk RFC as the club came together to celebrate the life and honour the memory of the late Caolan Meego Meegan, on the first anniversary of his passing.

Meegan was diagnosed with epilepsy when he was teenager but never let his health problems get in the way of life, continuing to play the sport he loved to a high level while also training to become an electrician.

The 19-year-old was a mainstay in the trenches for his side, an integral part of their U17 Leinster winning team in 2016 and had already established himself amongst the ranks of the club’s Senior team.

Unfortunately, the young rugby star’s life was cut short last year, when he passed away following an epileptic seizure while staying at a friend’s house.

To mark one year since his tragic passing, the club launched the Lockdown Lineout For Meego, an event where his former Senior squad teammates and coaches completed a 20km run in his memory to create awareness of epilepsy in young athletes.

The Mill Road was transformed into a sea of purple in memory of the young rugby star while raising vital funds for Epilepsy Ireland.

“In planning for this special event Meego’s teammates’ wish was that a life so beautifully lived would be beautifully remembered” stated the club’s PRO Mary Murdock.

“Their idea was to have the Senior Squad, Coaches and Meego’s Family and Friends Lineout in purple, the colour of epilepsy awareness in Caolan’s memory, completing 20km over the Bank Holiday Weekend crossing the finish line on the First Anniversary of his untimely death.”

Day 4 of the event was held in horrendous weather conditions, with the clouds in the sky meeting the dark mood of those who had lined out for their fallen Teammate, but as they crossed the finish line the mood was lifted by touching tributes from Murdock and club President John McKevitt.

This was followed by a presentation of Meegan’s Number Six jersey to his parents by two of his teammates David Murdock and Zak Coan, who had played rugby with Meego since they were young kids before moving through the youth structures and into the senior squad.

The club Senior team will honour Meegan’s legacy in the sport, through an annual rugby match at the Mill Road every May Bank Holiday weekend for the The Caolan ( Meego) Meegan Memorial Cup, which was also presented Meego’s Parents Patrick and Julie.

“The moments we shared on this Bank Holiday Weekend will remain with us forever as a club” said Murdock of the successful event which raised over €7000 for Epilepsy Ireland.

“It is a testament to the respect that Meego was held in and of what is thought of The Meegan Family. They should be so proud of the tribute paid to him by his club, by his family and by his friends.”