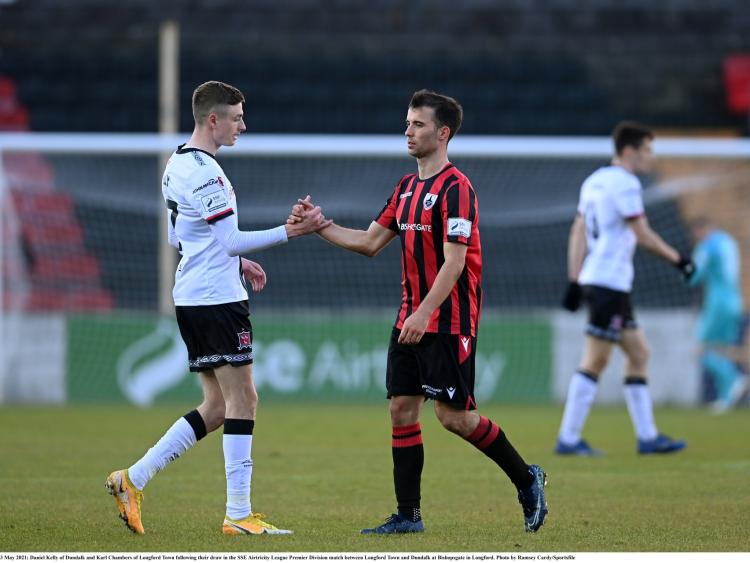 Daniel Kelly of Dundalk and Karl Chambers of Longford Town following their draw at Bishopsgate in Longford. (Photo by Ramsey Cardy/Sportsfile)

Dundalk FC were denied a third successive SSE Airtricity League win on Monday evening, as they had to come from behind to pick up a 2-2 draw with Longford Town at Bishopsgate.

Two mistakes from Peter Cherrie allowed Longford to go 2-0 ahead inside the first 15 minutes, but goals from Junior Ogedi-Uzokwe and Chris Shields rescued a point for Dundalk.

After winning their last two league fixtures, Dundalk had the game’s first effort at Bishopsgate when a Raivis Jurkovskis cross was headed well over by Sean Murray.

Longford took a shock lead after just six minutes of play when Dylan Grimes found himself in acres of space before unleashing a speculative shot which bobbled beyond Cherrie.

The experienced Dundalk goalkeeper reacted far too late for that opener and he was culpable once again six minutes later, as Longford added to Dundalk’s woes by going 2-0 in front.

In what were admittedly difficult conditions, Cherrie spilled what looked an easy cross from Karl Chambers, with Rob Manley only too happy to oblige as he finished into an empty net.

Dundalk got themselves back into the contest on 20 minutes when Junior finished from close range after Daniel Cleary headed on from Michael Duffy’s corner.

Longford could have crumbled after that, but much to their credit, they continued to manage the game exceptionally well, with Aaron Robinson having a shot deflected narrowly wide.

The Lilywhites again could have equalised when Jurkovskis fed Murray on the right, but he couldn’t get enough purchase on it, as the ball trickled beyond Duffy who was lurking.

Longford came very close to restoring their two-goal advantage when Dean Byrne curled a shot from 25 yards just beyond the top corner before a Dylan Grimes free hit the side-netting.

Dundalk almost equalised right before half-time when Duffy’s corner was headed goalwards by Cleary, with Andy Boyle somehow missing the target after sneaking in at the back post.

The second half was only two minutes old when Cherrie produced a magnificent save to deny Rob Manley after Boyle had misjudged a long goal-kick up the field by Michael Kelly.

The Lilywhites came agonisingly close to restoring parity when Duffy’s free from the right was flashed across goal by the head of Wilfried Zahibo, as Dundalk searched for a leveller.

Dundalk finally found an equaliser on 82 minutes when Junior played a lovely pass into the path of Shields, with the skipper driving a shot from outside the box into the bottom corner.

Duffy could have won it for the visitors when he got on the end of Midtskogen’s cross, but Michael Kelly saved, as Dundalk had to settle for a point at the Strokestown Road venue.