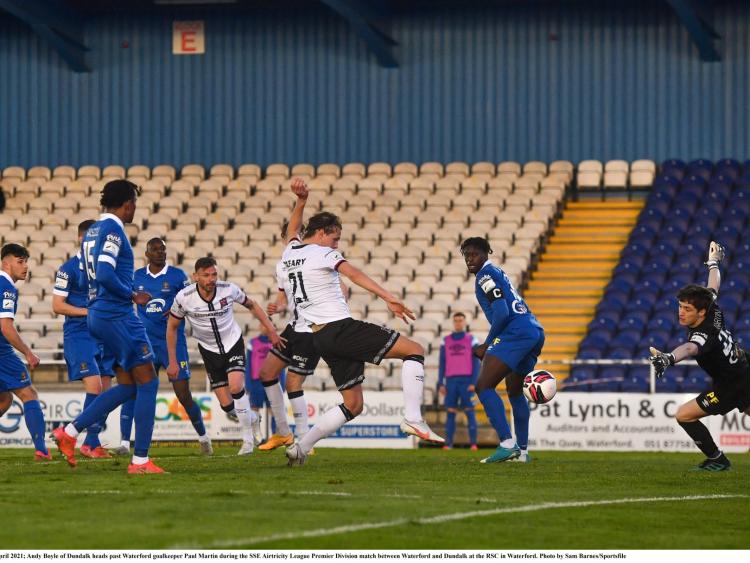 Andy Boyle heads past Waterford goalkeeper Paul Martin during the SSE Airtricity League match against at the RSC. (Photo by Sam Barnes/Sportsfile)

For the first time in over a year, Dundalk FC secured back-to-back SSE Airtricity League wins after they comfortably beat Waterford by a scoreline of 3-0 at the RSC on Friday night.

A header from Andy Boyle put Dundalk ahead on 24 minutes, while a Chris Shields penalty three minutes before the break – along with a Michael Duffy curling shot seconds after the restart – added further gloss to what was an efficient performance from Jim Magilton’s side.

Fresh from their first win of the season against Drogheda United the previous week, Dundalk started brightly at the RSC and David McMillan dragged a shot wide after just two minutes.

McMillan – who put in a remarkable performance in that 2-1 home victory over their Louth rivals – went close yet again after he headed off target from a Duffy cross not long after that.

Overall, this was an accomplished if not spectacular display from The Lilywhites which was akin to the successful Stephen Kenny era, but Waterford also had their chances throughout.

The menacing John Martin had a shot easily saved by Peter Cherrie, while the marauding James Waite took it beyond several Dundalk defenders before firing over from a tight angle.

Dundalk’s next chance came through Patrick McEleney, who dragged his shot well wide of the target, but The Lilywhites took what was a deserved lead just minutes after that attempt.

After skipper Shields was fouled by Waite, a Duffy free-kick from the right was headed home by defender Boyle, with Waterford stopper Paul Martin discommoded after the ball bounced.

Duffy was on song and he almost doubled Dundalk’s advantage when his strike was parried by Paul Martin before the young Waterford goalkeeper again saved from the Dundalk winger.

From Duffy’s corner, the visitors were awarded a penalty three minutes before the half-time break after substitute Junior Ogedi-Uzokwe was nudged in the box by Prince Mutswunguma.

Up stepped the dependable Shields, who dispatched into the bottom left-hand corner in spite of Paul Martin guessing correctly, as Dundalk took a two-goal advantage into the interval.

A mere seconds after the restart, Dundalk put the icing on the cake when from Ole Erik Midtskogen’s pass, Duffy curled a superb shot from just outside the box into the top corner.

There was not a whole lot Paul Martin could have done about any of the goals on the night and the Kilkenny native saved well to thwart Duffy, who was now in search of his second.

Waterford should have had a consolation when Waite caught the Dundalk defence napping; feeding the ball into John Martin, who then struck the post with Cherrie beaten all ends up.

Soon after that, Waite was again was the creator when he passed for Adam O’Reilly, whose shot from distance was inches off the target, as Kevin Sheedy’s side began to up the ante.

The Blues should have scored when from Jamie Mascoll’s set-piece delivery, Tunmise Sobowale’s kept the ball in play, only for John Martin to hit the underside of the crossbar.

From the rebound, Prince Mutswunguma kept the attack alive and quickly fed Katlego Mashigo, but he diverted over, as Dundalk kept their first clean sheet of the season intact.

After some neat build-up play, McEleney slipped Junior through on goal, but the Dundalk forward hit the outside of the woodwork after being put under pressure by Cameron Evans.

Junior was played in again – this time by Duffy – and he skipped past Darragh Power on the left before finding the side-netting in what was the final attempt of an entertaining match.