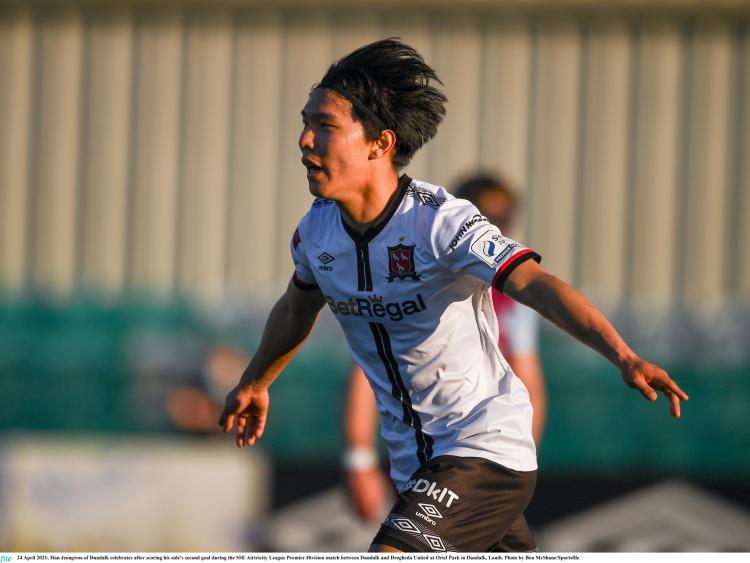 It was a first win in this season’s SSE Airtricity League for Dundalk FC, who recorded a 2-1 win over Louth rivals Drogheda United in what was an entertaining match at Oriel Park.

Goals in either half from man-of-the-match David McMillan and Han Jeong-Woo ensured that Dundalk picked up a first league win in nine games stretching back to last season.

Drogheda made two alterations from their agonising defeat to Shamrock Rovers on the same night, with Ronan Murray and Darragh Markey both coming in for Tim Clancy’s side.

The visitors had the game’s first attempt through ex-Dundalk man Murray when he dragged a shot wide inside the opening 60 seconds after getting on the end of a Lyons lay-off.

Playing in his preferred position of left-back, Raivis Jurkovskis floated in a cross which was headed narrowly wide by McMillan, who was starting in place of the injured Patrick Hoban.

McMillan wasn’t to be denied on 24 minutes as Dundalk took the lead, with the frontman getting on the end of another Jurkovskis cross, hitting the target with a nice diving header.

Dundalk almost doubled their advantage when Daniel Cleary’s long pass from the back was brilliantly controlled by Michael Duffy, but Drogheda stopper Colin McCabe palmed away.

The hosts had another chance when after some good work by the industrious Han on the right, Patrick McEleney floated in a cross that was headed wide by Duffy at the back post.

That was the last meaningful piece of action from what was a solid first-half display by The Lilywhites, but Drogheda began to threaten a lot more once the second period got underway.

Darragh Markey fired over for The Drogs after some good build-up, while defender Daniel O’Reilly curled a shot from outside the box which was deflected a mere inches over the top.

However, as Drogheda pushed for an equaliser, they were found wanting on 71 minutes when McMillan was given the freedom of Oriel before squaring for Han, who finished with ease.

Han became the first Korean player to score a League of Ireland goal since Kim Jin-Gu netted for Galway United versus Dundalk in 2011. In goal that night was Cherrie, who ten years later produced an excellent save to deny Lyons following James Brown’s set-up.

Lyons scored for Drogheda in the 90th minute to give Dundalk a late scare, but The Lilywhites survived the late pressure to record their first league win since last October.