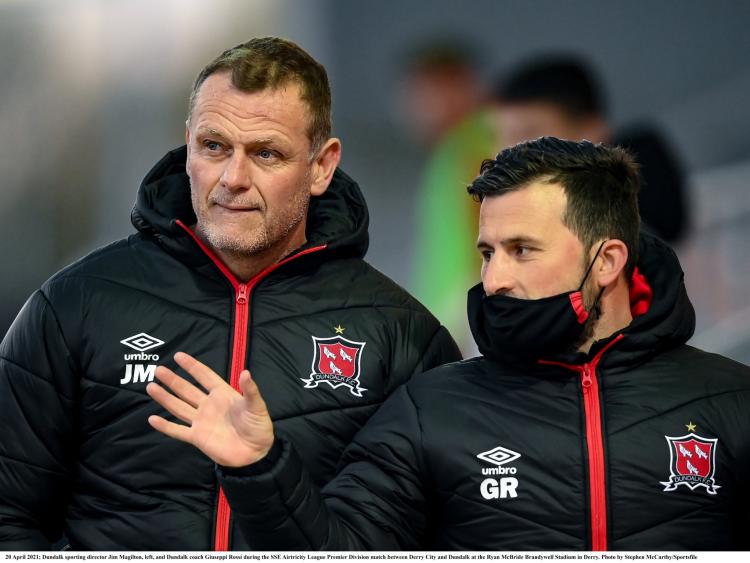 Dundalk FC were denied what would have been a deserved three points at the Ryan McBride Brandywell Stadium on Tuesday night, as they played out a 1-1 draw with Derry City.

David McMillan gave Dundalk the lead in the second half before another Alessio Abibi error allowed Cameron McJannet to equalise for a result which does little for either side’s season.

Dundalk’s first effort came after just three minutes when Sam Stanton’s cross from the left was headed wide by Patrick Hoban in what was a lively start from Jim Magilton’s side.

Not long after that, Patrick McEleney sent in a cross which was headed over by Junior Ogedi-Uzokwe – fresh from his first goal for the club against St Patrick’s Athletic last Saturday.

Dundalk’s best chance of the first half came through the good work of two Derry natives – with McEleney going inches wide with a shot after linking up with Michael Duffy on the left.

In spite of Dundalk’s early dominance, Derry had an opening when Daniel Lafferty’s set-piece delivery was headed over by James Akintunde after he rose above the visiting defence.

The Candystripes almost took the lead ten minutes before the break when some hesitant play from Andy Boyle and Alessio Abibi allowed Will Fitzgerald to squeeze his effort just wide.

Dundalk took the lead on 53 minutes when Daniel Cleary’s long pass from defence found its way to Duffy and he squared it for substitute McMillan, who finished from close range.

The Lilywhites really should have doubled their lead minutes after that when Stanton found himself through on goal, but Derry custodian Nathan Gartside brilliantly denied the Scotsman.

Magilton’s team were coasting at that stage and were looking likely to extend their lead, but a third catastrophe in five games for Albanian stopper Abibi afforded Derry a leveller.

A free was whipped in just past the hour-mark and was headed across goal by Ronan Boyce before being headed home by McJannet after Abibi had failed to collect an easy ball.

Dundalk had late chances to win it and Gartside did brilliantly to deny McMillan’s shot before Cameron Dummigan rattled the crossbar, but Dundalk had to settle for a point.