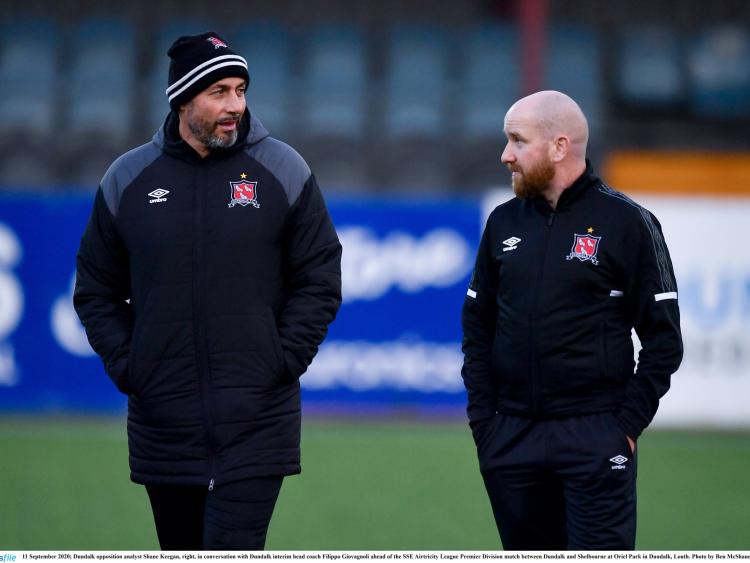 Dundalk FC this morning confirmed that Shane Keegan and Filippo Giovagnoli have both left the club with ‘immediate effect’ on the back of the club’s poor start to the new season.

The club issued a statement today, amid widespread reports that Keegan had tendered his resignation on Friday before Giovagnoli bid farewell to his players on Sunday morning.

Giovagnoli replaced Vinny Perth as head coach last August and guided the club to FAI Cup glory and the Europa League group stages before taking more of a backseat role this year.

Giuseppe Rossi – who served as assistant to Giovagnoli – will remain at the club as part of the coaching team for now, with the search for a new manager or head coach now underway.

A club statement read: “Dundalk FC can confirm that Filippo Giovagnoli has left the club with immediate effect.

“The Italian arrived at Oriel Park last August and played a major role in helping The Lilywhites to the group stages of the UEFA Europa League.

“He also coached the side to FAI Cup final success against Shamrock Rovers at the Aviva Stadium in December 2020, and the FAI President’s Cup in March of this year."

“The club would like to thank Filippo for his hard work at Oriel Park over the past nine months."

“He has behaved with great dignity and professionalism throughout his time in Ireland and everyone at the club wishes him all the very best in the future."

“Giuseppe Rossi will remain at Dundalk FC as part of the coaching team.”

Having initially joined the club as opposition analyst at the start of last year, Pro Licence holder Keegan was drafted into the coaching team following Giovagnoli’s appointment.

Keegan was announced as the club’s new ‘team manager’ at the start of this season, but on the back of what was Dundalk’s worst start to League of Ireland campaign in 15 years, Keegan departed before Saturday evening’s 1-1 draw with St Patrick’s Athletic at Oriel Park.

“Dundalk FC can also confirm that Shane Keegan has left his position as team manager,” continued the statement.

“Everyone at the club would like to thank Shane for his work during his time at Oriel Park and wishes him the very best in the future."

“The club will conduct a thorough recruitment process for a new manager and will not be making any further comment on the selection process until an appointment is made.”