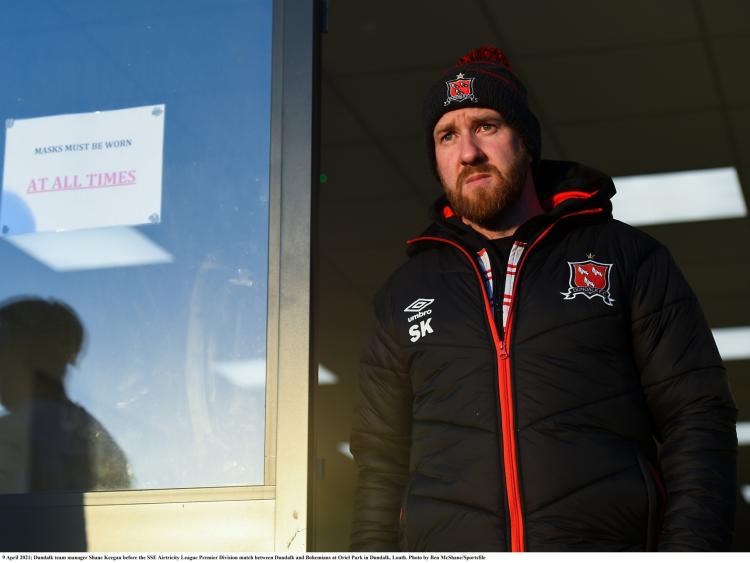 Dundalk FC welcome top-of-the-table St Patrick’s Athletic to Oriel Park on Saturday (kick-off, 6pm) in what is being described as a ‘massive’ game by team manager Shane Keegan.

With just one point accumulated from 12, Dundalk are to play three matches within the next seven days against St Pat’s, Derry City (Tuesday) and Drogheda United (Saturday week).

Keegan – who told The Democrat last week that he believes his side can go on a ten-game winning run – reckons that the next seven days will make or break The Lilywhites’ season.

“We’ve got a vital seven days ahead,” he said.

“It’s three games to save our season and put ourselves back at the right end of the table, or we can resign ourselves to looking at this end of the table for the rest of the season unless we get our act together over those seven days.”

It just so happens that St Pat’s recorded their last league win at Oriel during that same season.

St Pat’s come into this fixture on the back of a magnificent run which has seen them win three games on the bounce against Drogheda (2-1), Bohemians (1-0) and Derry (2-0).

However, Keegan is confident that despite their own abysmal form, The Lilywhites can end the Inchicore side’s purple patch on Saturday and get their floundering season back on track.

“I think everybody expected them to do well this season because it’s Stevie’s (O’Donnell) second season. He was always going to get a bit more out of them and I think he’s signed really well as well. Their strongest eleven on the field is as good as any eleven. They certainly intend to be up around those top couple of spots for the entire season."

“I think we had a couple of good games against them last season. They are one of the toughest challenges that you’ll have in a season. But, when we get it right, we’re capable of beating absolutely anybody.”

On the back of what has been Dundalk’s worst start in 15 years, Keegan has accepted calls from supporters for both himself and coach Filippo Giovagnoli to leave, but has said there is “definitely not” any truth in the speculation that the Italian was ready to quit last weekend.

“I wouldn’t expect any different to be honest,” said Keegan in response to the calls.

“It leaves everybody under extra pressure. I think we’ve been saying from the start that it’s very much a collective approach to the management side of things up here, so we’re all under pressure from the top down. We’re confident still that we’re going to turn it around."

“As a group, we’re more determined than ever to try and swing it around and to get it right. That’s what our sole focus is. It’s not on walking away or finger pointing at anybody else."

“I’d certainly agree that it’s not where we want it to be. It’s absolutely impossible to say otherwise. It’s quite simply been nowhere near good enough and we have to arrest that halt immediately.”

Dundalk have been boosted by the news that Sean Murray is back in contention for the first time this season, while Sonni Nattestad also returns following a two-match suspension.

Daniel Kelly remains unavailable, with Brian Gartland being the only other definite absentee.