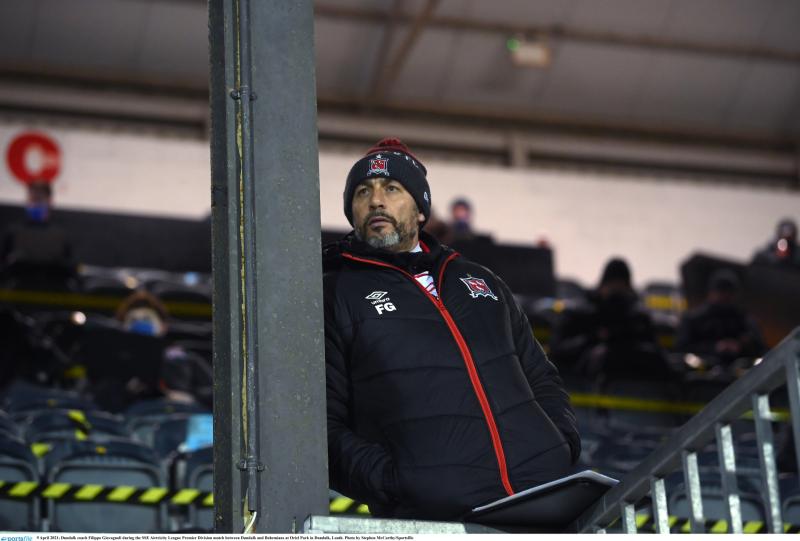 Dundalk coach Filippo Giovagnoli looks on from the stand in Oriel Park during their SSE Airtricity League meeting with Bohemians. (Photo by Stephen McCarthy/Sportsfile)(

Dundalk’s worst start to League of Ireland season in 15 years continued tonight as they were beaten 1-0 by Bohemians, with the pressure mounting on the management team at Oriel Park.

Georgie Kelly’s penalty was all that separated the sides, as Dundalk’s winless run in the SSE Airtricity League was extended to a damning seven matches stretching back to last October.

Following mistakes in consecutive weeks, goalkeeper Alessio Abibi was dropped in place of veteran Peter Cherrie who was making his second Oriel debut – 12 years after the first one.

The hosts started well and Andy Boyle’s header from a Michael Duffy corner hit the crossbar shortly before the latter dragged a shot wide, but James Talbot had it covered in any case.

A beautiful first touch and shot from Raivis Jurkovskis trickled just wide, but the Latvian international was culpable seconds later, with his loss of possession preceding Daniel Cleary’s foul inside the box on Ross Tierney, as Bohs were awarded a penalty on 12 minutes.

Against his former employers, Georgie Kelly made absolutely no mistake from the spot, sending Cherrie the wrong way as the pressure mounted on the Dundalk management team.

Needing a response, Patrick Hoban headed over from Duffy’s corner while at the opposite end, Liam Burt drilled his low shot agonisingly wide just before the half-time break.

After missing the previous two matches with a hamstring injury, Patrick McEleney was introduced for the second period and his attempted free-kick was easily saved by Talbot.

McEleney caused Bohs more problems and after some good work down the right from the Derry man, Talbot produced a superb save to keep out a close-range header by Sam Stanton.

Dundalk had late penalty appeals waved away when from Darragh Leahy’s cross, the ball struck the arm of Rob Cornwall, while Duffy fired a shot inches wide in the dying embers.