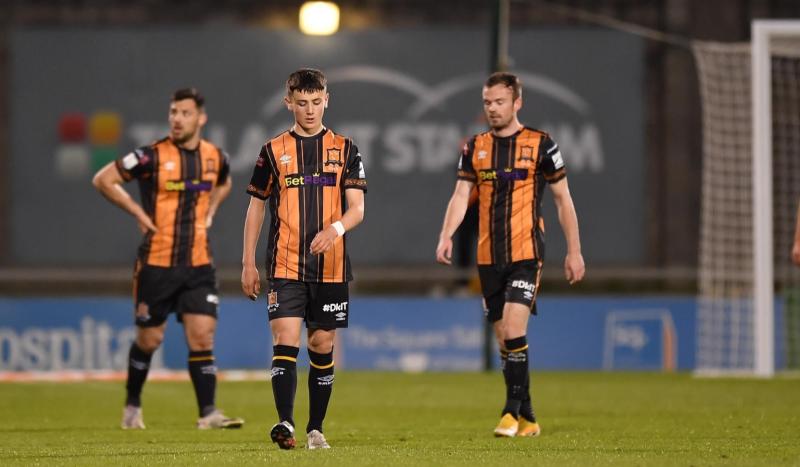 A disastrous start to the new SSE Airtricity League season continued for Dundalk FC on Friday night, as they were beaten 2-1 by defending champions Shamrock Rovers in Tallaght.

Rovers deservedly led at half-time through Daniel Mandroiu’s screamer and although Dundalk were much-improved after the break, Dylan Watts inflicted a near-fatal blow on 76 minutes before Patrick Hoban offered The Lilywhites some hope with a minute remaining.

The result means that Dundalk have failed to win in their opening three fixtures of a Premier Division campaign for the first time since 2001/02 when they were ultimately relegated.

Not even a minute had elapsed when Rovers created their first chance, as Mandroiu pulled the ball back for Republic of Ireland international Graham Burke, who skied his attempt over.

Dundalk were dealt a huge blow when Brian Gartland – making his first appearance of the season – had to be stretchered off in the early stages after he landed awkwardly on his knee.

Having come under much scrutiny last week, Dundalk goalkeeper Alessio Abibi pulled off a fine save, tipping over the crossbar after Chris McCann had tried his luck from distance.

Dundalk’s best chance of the first half came after 15 minutes when a Raivis Jurkovskis ball over the top sent Michael Duffy on his way. He left Sean Hoare for dead before crossing for Patrick Hoban, but he couldn’t turn his effort home with Liam Scales crucially intercepting.

From the resulting corner, Sam Stanton sent in a delivery which was met by a downward header from Greg Sloggett, but Rovers veteran Alan Mannus collected with relative comfort.

It was all Rovers for the remainder of the first half and Aaron Greene had a shot from distance kept out well by Abibi, while ex-Dundalk man Hoare headed wide from a corner.

Rovers went ahead on 35 minutes when Mandroiu picked up the ball from a quick free-kick before unleashing an absolutely unstoppable curling shot which gave Abibi no chance in the Dundalk goal, as the visitors took what was probably a deserved lead going into the break.

After a forgettable first-half display, Dundalk came out of the blocks for the second period and after turning Scales inside-out, debutant Ole Erik Midtskogen shot straight at Mannus.

Duffy almost levelled matters for Dundalk when he was fed the ball by Stanton before making a surging run and firing in a shot, which was saved only by the shoulder of Mannus.

The Derry native was looking like Dundalk’s biggest threat going forward and he rattled the underside of the crossbar after getting on the end of a Cameron Dummigan cross-field pass.

Yet more chances were to come for the visitors, as Stanton unleashed a rasping shot which fizzed inches wide before Duffy – from Dummigan’s cross – volleyed straight at Mannus.

Despite their dominance, disaster struck for The Lilywhites on 76 minutes when Watts, with the freedom of Tallaght Stadium at his mercy, fired a shot which flew into the bottom corner.

With the Dundalk players now dejected, Rovers had chances to extend their lead even further and Aaron Greene flashed a shot just wide, not long before Rory Gaffney fired over the top.

To their credit, Dundalk didn’t give up and Dummigan forced Mannus to save at his near post, while Andy Boyle found Hoban in the box and he crashed his header off the post.

Dundalk did get the goal their efforts probably deserved when Chris Shields floated a delightful ball right onto the head of Hoban, who revived hope with 89 minutes played.

Disappointingly enough, there was no late surge from Dundalk as Rovers held out for a win – something the Oriel Park club now haven’t managed to do in the league since last October.