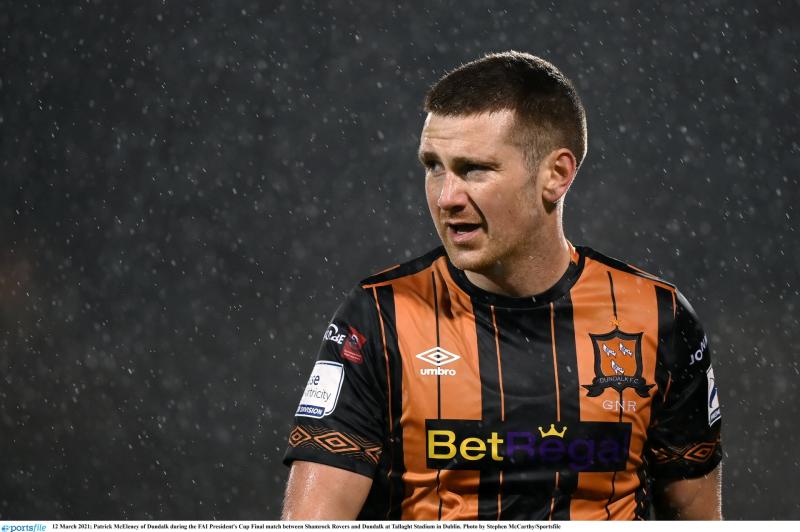 Shane Keegan denied reports that Patrick McEleney will be out for the next month and says that the midfielder could play against Shamrock Rovers on Friday night (kick-off, 7.45pm).

Having scored against Sligo Rovers on the opening night of the new SSE Airtricity League campaign, McEleney missed last week’s defeat to Finn Harps because of a hamstring injury.

However, Dundalk FC team manager Keegan claimed on Wednesday afternoon that those speculating that McEleney is facing a long-term lay-off have ‘definitely jumped the gun’.

“He’s definitely not going to be out for four weeks,” Keegan told The Democrat.

“He just felt a little bit of a twinge on the hamstring last week and we thought we would be better safe than sorry. I’d love to be able to say that he definitely will be involved on Friday night, but we’re not able to say that either.

“There is a chance, but I would be thinking it’s touch-and-go and 50-50 maybe for this week. If not this week, then it definitely shouldn’t be any longer than the following week all going well.”

Despite starting in three World Cup qualifiers in less than seven days for Latvia over the past week, full-back Raivis Jurkovskis looks set to feature for Dundalk against Shamrock Rovers.

Norwegian striker Ole Erik Midtskogen, who hasn’t yet played a competitive game for the Oriel Park club, is also in contention to make his long-awaited debut against The Hoops.

While there’s hope for McEleney as well, Dundalk will be without the suspended Sonni Nattestad for Friday’s visit to Tallaght, while Sean Murray and Daniel Kelly are both injured.

“We’re down to a stage where there’s really only two or three that are definitely out,” added Keegan.

Failure to win on Friday night would, according to records, mark the first time since 2001 that Dundalk didn’t win in any of their opening three matches of a Premier Division season.

While travelling to the home of last year’s champions will be no easy task, The Lilywhites will take confidence from their last two meetings with Rovers heading into Friday’s match.

Dundalk defeated Rovers in a penalty shoot-out to win the President’s Cup three weeks ago – a victory which came just three months after beating them to lift the FAI Cup last December.

“Any game between the two teams over the last two, three years has been absolutely massive and this Friday night will be no different,” said Keegan.

“In the last two games against them, we have ground out two fantastic results, but if we’re 100% honest, we were maybe second best for prolonged periods of both games, so I don’t think we’ll be getting carried away with those two results.

“We’ve more than shown that we’re able for them. There’s no doubt they are the best around along with ourselves. I think we’re fully confident that we can go and get something from the game. In this league, you can’t wait until game six or seven before you get running. You have to hit the ground a little bit quicker and it’s what we’ll be aiming to do.”

Friday’s game will be broadcast live on RTÉ Television, with coverage beginning at 7.30pm.