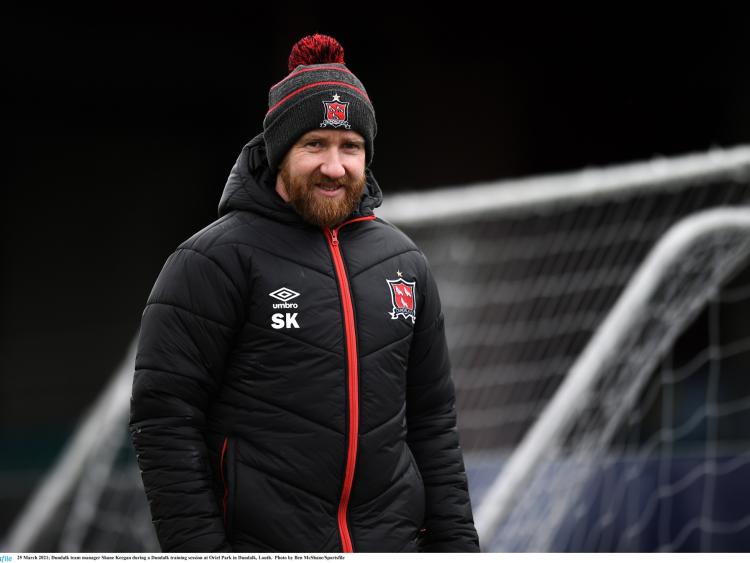 Dundalk FC will play their first home game of the new SSE Airtricity League season on Friday evening when they welcome a buoyant Finn Harps to Oriel Park (kick-off, 5.45pm).

And, despite coming into Friday’s fixture as big favourites, Dundalk team manager Shane Keegan isn’t expecting an easy game against a Harps side that drew 0-0 at Oriel last year.

“They got off to a fantastic start last weekend,” he said.

“I thought Bohs were very impressive when we played them here in pre-season – you would be looking at them being at least top-three. So, for Harps to go and get that result on the opening day was a fantastic result for them.

“Should we really be surprised? Because they’re just always so good at home first and foremost. The second thing which I think has been a huge advantage to them is that they’ve more continuity than any other team in the division.

Few clubs have had a greater turnover of personnel than Dundalk, who have brought in ten new additions to the playing squad, with one or two more expected to sign in the near future.

Heavy investment into the squad has seen the likes of Sonni Nattestad and Raivis Jurkovskis added, both of whom started for their respective countries in World Cup Qualifiers this week.

Ex-Valencia midfielder Wilfried Zahibo is also expected to finalise a move to Oriel sooner rather than later, with Keegan revealing to The Democrat on Tuesday that there’s “very nearly an agreement” in place to sign the 27-year-old Central African Republic international.

The Dundalk manager is fully aware that heavy investment equates to heavy expectations, but firmly believes that the quality currently on the books is capable of rising to the challenge.

“People should be expecting big things from this Dundalk team because there’s loads of quality there, simple as that,” he added.

“The same way people should be expecting big things from the Shamrock Rovers team because there’s loads of quality there. Does it put extra pressure on us? I don’t think so. I think everybody looking at Dundalk would expect them to be there or thereabouts for a league title come the end of the season.

“Everybody will be expecting Shamrock Rovers to be there or thereabouts for a league title come the end of the season. That comes with the quality of what’s in both squads nearly more so than anything to do with looking at the finances.”

Nattestad and Jurkovskis both being away on international duty with the Faroe Islands and Latvia respectively, coupled with injuries to Sean Murray, Ole Erik Midtskogen, Val Adedokun and Daniel Kelly means the Dundalk squad is somewhat decimated for Friday.

A silver lining for Dundalk is the possible return of experienced defender Brian Gartland, who hasn’t featured since the 4-2 defeat in the Europa League to Arsenal last December.

“We’re still missing the bodies that we were missing last week which meant that we were only able to name 18 rather than 20,” lamented Keegan.

“Now, we’ve two more of those gone because they’re away on international duty so that brings us down to 16. The only one who was out who has a decent chance of being back in possibly is Garts. We’re going to be light enough again player wise, but I don’t think we’re light quality-wise and that’s the more important thing.”

With only 16 senior players available for selection, Dundalk could offer a debut to their latest acquisition, Han Jeong-Woo, who only officially signed for the club on Thursday evening.

The Korean winger has represented his country at both U18 and U22 level and was named in the preliminary squad for the Korean team that won the AFC U23 Championship last year.