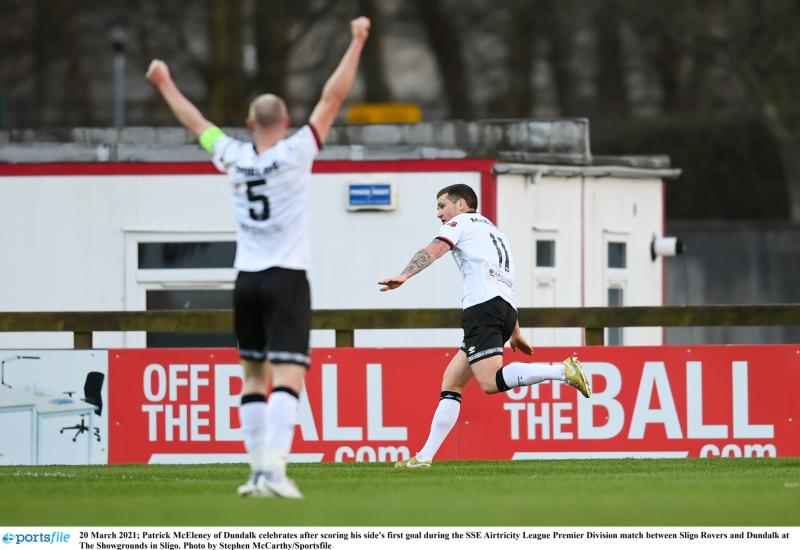 Patrick McEleney celebrates after scoring his side's first goal against Sligo Rovers at The Showgrounds. Photo by Stephen McCarthy/Sportsfile

Dundalk FC opened their 2021 SSE Airtricity League campaign with a 1-1 draw against Sligo Rovers in what was an entertaining match at The Showgrounds on Saturday evening.

Slack defending from both teams in the first half allowed Patrick McEleney to bag his first league goal since 2019 before Sligo’s returning hero Romeo Parkes headed in an equaliser.

A draw was probably a fair result in the overall balance of play, but Dundalk will be more than disappointed to have not taken all three points after last season’s champions Shamrock Rovers had dropped two against St Patrick’s Athletic at home less than 24 hours earlier.

Junior Ogedi-Uzokwe scored a free-kick in the colours of Sligo when The Lilywhites visited The Showgrounds last August but, now in the colours of Dundalk, it was his corner that was headed well over by McEleney in what was the game’s first attempt after seven minutes.

Back at Sligo after a year in the United States, Parkes did brilliantly to beat the challenge of both Chris Shields and Daniel Cleary before slipping in Jordan Gibson who then hit the post.

Dundalk should have taken the lead before the half-time break when, after another mistake from McGinty, Junior pulled back to Hoban, who dragged a shot wide with the goal gaping.

The Lilywhites had chances to take the lead in the second period, with Cameron Dummigan firing over after Hoban had set him up, following what was some good play from the visitors.

Sloggett saw his shot deflect off John Mahon and into the hands of McGinty, before the unmarked Hoban headed wide after getting on the end of a McEleney corner from the left.

Disappointed with that miss, Hoban went close again when from Daniel Cleary’s delightful ball, he headed onto the inside of the post as the grateful McGinty gathered at the rebound.

It was all Sligo after that, however, and Gibson did brilliantly out on the right before playing in Colm Horgan, whose cross flashed across goal with Kenny just about failing to connect.

Having not lost an opening-night fixture since 2014, Dundalk had to dig deep to continue that record as Sligo began to press forward in search of what would have been a dramatic winner.

Alessio Abibi was Dundalk’s hero in their President’s Cup victory in the previous week, and the Albanian saved well from Kenny after he was played through on goal by David Cawley.

Sligo had a goal ruled out in the closing stages when Kenny’s shot was saved by Abibi, with the rebound falling to Cawley, who squared for Mark Byrne to finish but the flag was raised.

That offside decision looked to be marginal at best and Dundalk had another lucky escape in stoppage-time when Abibi punched Cawley’s effort away before saving again from Bolger.

That was the game’s last piece of action, with Dundalk now looking ahead to next week’s home fixture against Finn Harps, who recorded a 2-0 win over Bohemians on the same night.