Abibi the toast of Tallaght as Dundalk win the President's Cup 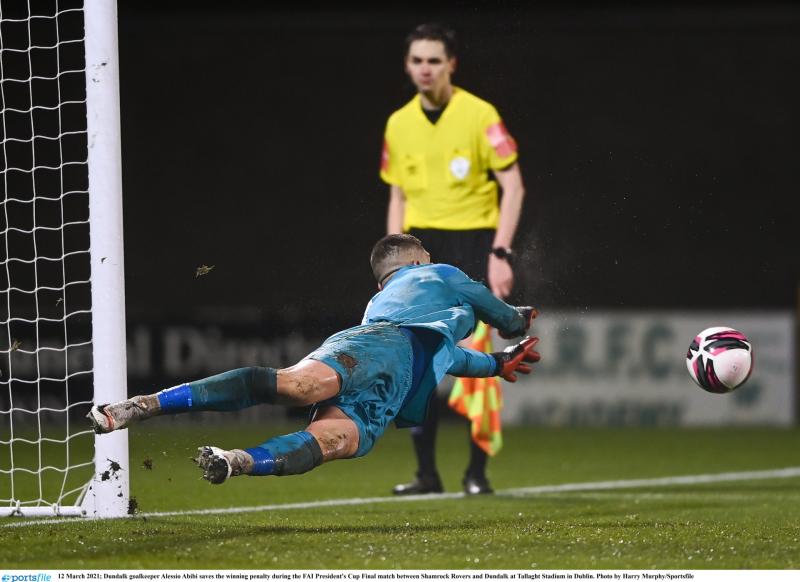 Dundalk FC collected the President’s Cup trophy on Friday night, beating Shamrock Rovers 4-3 in a dramatic penalty shoot-out after a game that had finished 1-1 after 90 minutes.

Alessio Abibi was the toast of Tallaght Stadium, making two excellent saves in the shoot-out. That was after Sonni Nattestad had given Dundalk the lead, only for Liam Scales to equalise.

Competitive debuts were handed to five Dundalk players on the night, with Abibi, Nattestad, Raivis Jurkovskis, Sam Stanton and Junior Ogedi-Uzokwe all named in the starting line-up.

In what were extremely treacherous conditions in South Dublin, plenty of tackles flew in between these two bitter rivals in the early stages, even if clear-cut chances were scarce.

It was Rovers that had the first attempt through Republic of Ireland international Graham Burke, who fired a shot over the top of Abibi’s crossbar shortly after ten minutes had elapsed.

The hosts had another opportunity to go ahead when Danny Mandriou’s corner was headed off the crossbar by Scales, with Dundalk managing to scramble away the rebound.

Without being overly tested in the first half, he confidently gathered a couple of dangerous-looking Rovers crosses, as well as keeping out Chris McCann’s shot from outside the box.

As the opening half neared its conclusion, Dundalk started to look more threatening, and after some good work on the right from Junior, a Jurkovskis cross flashed menacingly across goal.

Indeed, The Lilywhites took the lead on 42 minutes with their first attempt on target after Patrick McEleney’s delightful corner was headed home by the 6ft 6in frame of Nattestad.

Rovers levelled matters just three minutes after the restart, however, when Scales, with his back turned to goal, took two touches before turning and volleying past Abibi to make it 1-1.

The game’s main talking point arose just before the hour-mark when Nattestad’s dream debut swiftly turned into a nightmare after he was given a straight red card for a tackle on Burke.

A red may have been incredibly harsh in this instance, but it nonetheless reduced Dundalk to only ten players for the remainder of proceedings, and they really had to hang on after that.

Aaron Greene saw his cross-come-shot hit the bar via the fingertips of Abibi, not long before ex-Burnley midfielder McCann saw another effort from distance sail just wide of the mark.

Five minutes from the end, Abibi once more saved well to deny Burke before again foiling the Rovers forward in stoppage-time, ensuring that the game headed for a penalty shoot-out.

Patrick Hoban and Dylan Watts both dispatched for their respective sides before Greg Sloggett blazed over his attempt, with Rovers gaining the advantage after Greene converted.

Daniel Cleary and Chris Shields were also successful, as was Rovers defender Joey O’Brien, but the same couldn’t be said for Rory Gaffney, who saw his effort brilliantly saved by Abibi.

Andy Boyle for Dundalk and Burke for Rovers both skied over from 12 yards to send the shoot-out into sudden-death, with Darragh Leahy then scoring to give Dundalk the advantage.

Knowing he needed to score to keep Rovers in the contest, up stepped Roberto Lopes, but Abibi got down brilliantly to his left to save again and win the President’s Cup for Dundalk.