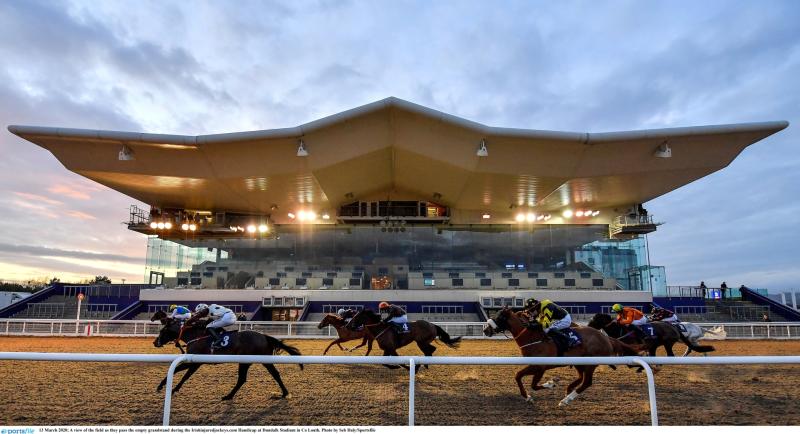 Dundalk Stadium welcomes horse racing for the first time in 2021 this afternoon, with a competitive eight-race card getting underway at 3:55.

With big fields and competitive racing at various distances, there is plenty for punters to get their teeth into, with the feature the Hollywoodbets sponsored Rated Race over seven furlongs going to post at 5:30.

The Ado McGuinness trained Faakhirah heads the betting following her flying form at the track over Christmas with Champion apprentice Gavin Ryan taking the ride in the raced valued at €11,000.

Louth trainer John Larkin saddles one of the leading contenders with Foreign Legion, who comes into the contest off the back of a course and distance victory, while Tyrconnell for Sarah Lynan has looked progressive in recent outings but both will have to overcome unfavourable high draws.

The sprinters get the action underway as the Ciaran Cotter trained Dandy Spirit attempts to overcome a 23-pound rise in the handicap following back to back successes in the winter, but claimer Adam Farragher taking off a valuable seven pounds will significantly improve his chances.

Red Symbol for the Anthony McCann yard was below par in his last outing but had been running well in defeat throughout the Autumn, while Mushariff is an interesting contender for James McAuley on Irish debut having ran well on the all-weather surface in Wolverhampton last time out.

The most valuable pot of the evening sees the stayers in action at 6:30 with a two-mile handicap worth €9,300 to the winner, and it is no surprise that the track’s reigning champion trainer comes triple handed with Scholastic, Grandmaster Flash and Tonkinese entered for Joseph O’Brien.

Grandmaster Flash has been out of form of late but has a remarkable record at the venue boasting one win and six seconds from seven starts and cannot be left out of calculations with 10 pounds being taken off by apprentice Cathal Gahan who is seeking is first win under rules.

Scholastic bounced back from a disappointing run over hurdles when second over course and distance last month and looks a strong contender when reunited with Mikey Sheehy and will fight for favouritism with the John McConnell-trained Make the Switch who was victorious at a shorter trip last time out, while Swift Wing may outrun his price back running over a longer trip.

The card also features a wide-open maiden over six furlongs going to post at 6:00, with Ted Walsh hoping to finally hit the target with the family-owned Ferrybank, while the Crowne Plaza Hotel sponsors both divisions of the one-mile two-furlong contests that conclude an exciting card.

Away from the action, Dundalk Stadium was delighted to announce that its partnership with the South African based betting company Hollywoodbets will continue into the new year after agreeing to a three-month extension that will see the firm sponsoring races at the next 17 meetings.

“We are delighted that Hollywoodbets has decided to extend its sponsorship here at Dundalk Stadium” stated CEO Jim Martin. “We believe the partnership has been fantastic and we are thankful for their continued support of Irish Racing.”