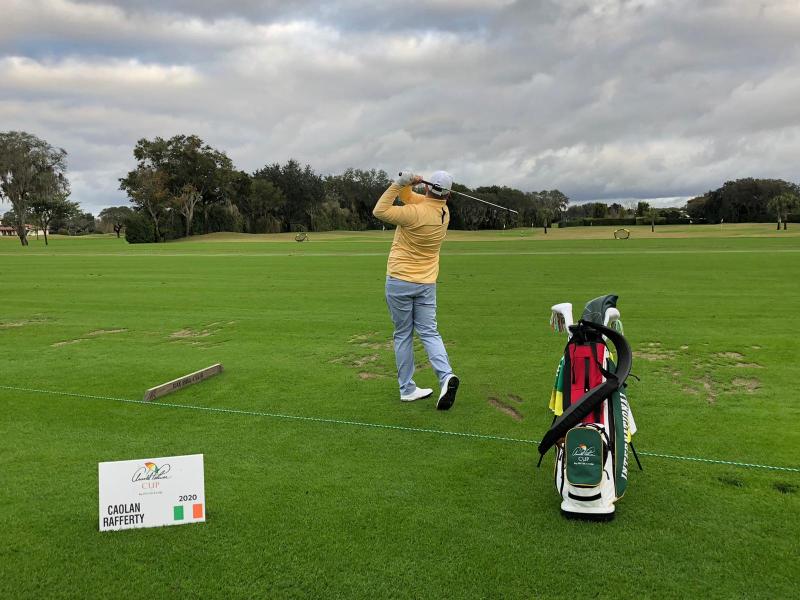 After seeing almost all his plans for 2020 derailed because of COVID-19,  Dundalk golfer Caolan Rafferty got the perfect Christmas present when he helped the International team retain the Palmer Cup at Bay Hill Golf Club in Florida.

Created by the legendary Arnold Palmer, the Ryder Cup-style event involves the best male and female college players from America and the Rest of the World. It was due to be played last summer in Lahinch but had to be postponed because of COVID-19.

It was moved to America and took place just before Christmas with the International team showing no ill-effects from a disrupted year as they ran out convincing winners by 40.5 to 19.5, winning all four sessions over the three days of the event.

At the start of the year, Rafferty had targeted a place at the Palmer Cup as one of his season goals in a bid to finish his time as a Harrington scholar at Maynooth University on a high.

A lack of competitive golf, a hand injury that required surgery back in September, and a period of isolation on arrival in America meant Rafferty’s preparation was far from ideal but he got off to a winning start on Day One when he partnered Olivia Mehaffey from Banbridge to victory in the Mixed Foursomes.

The Irish pair beat Quade Cummings and Jaime Jacobs by one hole in a match where they were never behind after birdieing the second to go one up. They were two up with four to play but lost 15 and 17 to birdies before snatching victory with a par on the last.

“I played okay but Olivia, thankfully, played really well. I just helped out when I could and it was nice to get a point on the board early,” said Rafferty,

The International team opened up a 9-3 lead after the first day and then extended that to 15 points after the morning fourballs on Day Two which Rafferty had to sit out as a positive COVID case on the USA team meant they couldn’t field in all the matches.

He returned for the afternoon mixed foursomes alongside Mehaffey but they were just edged out by one hole by the America pair of Evan Katz and Gina Kim. The Irish pair had taken an early lead with a birdie on the third but then lost the fourth and seventh. They got back to all square by winning the 10th but lost the next hole to par and were unable to get back on level terms as the Americans held on to win by one hole.

“Like the day before we played decent golf and it just came down to a putt here and there that could have gone our way. I suppose it just showed the standard we were playing at. There was nothing between us.”

The International team took the session 12-5 and went into the last day singles leading by 26.5 to 9.5 and needing just four points to secure overall victory.

The International selectors decided to lead with all-Irish attack with Mehaffey, Mark Power and Rafferty handed the first three slots in the singles. Mehaffey halved her match to set them on their way before Rafferty delivered the international’s first win of the day when he beat Evan Katz by one hole.

The Dundalk player had got off the perfect start by winning three of the first five holes but he then lost six and seven to birdies and when he lost nine and ten to pars he found himself one behind.

However, he bounced back by birdieing the 11th and regained the lead with a par on the 13th. However, Katz refused to submit and struck back on the 16th which he won with a birdie. Rafferty then needed to hole a knee-jerking four-foot putt on the 17th to remain all-square before winning the match on the last.

“We both played sloppy golf on the front nine but there was a lot of good golf on the back nine. On 18 I hit a 5 iron from the rough to 35 feet while he missed the green long and didn’t get up and down. It ended up that I had two putts for the win but first putt held its line across the slope and went in for birdie which was a nice way to finish especially considering it's a similar putt which we see the pros having when they play the Arnold Palmer invitational at Bay Hill.”

The International team took the singles 14-10 to run out winners by 40-5 to 19.5 and retain the Palmer Cup. For Rafferty, it was a week to remember at the end of a year to forget.

“It was great that it was played because it wasn't looking likely for a long time. Lahinch would have been fantastic venue but getting the opportunity to play in Arnold Palmer’s back garden at Bay Hill was very special.

“The team gelled so well. It was as if we knew each other for ages. Nothing felt awkward and there was good craic between us all. The whole week was great with the opportunity to meet loads of new people and experience a fabulous venue. I was told it would be special and it surely was.”

Rafferty’s next objective is to make the Great Britain and Ireland team which will play the USA in the Walker Cup at Seminole Golf Club in Florida next May. He was recently named on the squad from which the travelling team will be picked and is determined to make it back to back appearances in one of golf’s biggest events.

“It's always a great achievement to make that panel so I'm delighted. I’m just going get the foot down and start getting ready for whatever will be the first event in 2021. Hopefully, I can play my way back onto the final 10-man team again.”