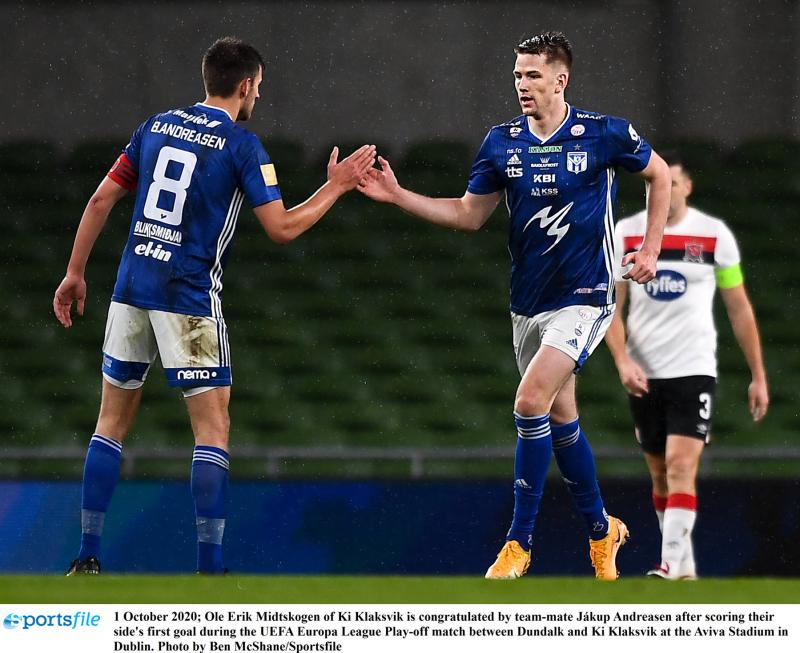 Dundalk FC have made their first signing of the close season, by bringing in Norwegian striker Ole Erik Midtskogen from KI Klaksvik, who Dundalk defeated back in October.

The Lilywhites knocked the Faroese champions KI out of the Europa League at the play-off stage, thanks to a 3-1 win at the Aviva Stadium, in which Midtskogen scored for the visitors.

The 25-year-old Midtskogen, who stands at a towering 6ft 4in, spent just one season at KI – scoring ten goals in 2020 – after signing from HamKam in his native Norway 12 months ago.

“Ole’s characteristics as a player will really fit into our style of play and to the League of Ireland,” said Dundalk head coach Filippo Giovagnoli, who was impressed with Midtskogen  back in October.

“He scored a brilliant goal against us, but it’s his all-round style and quality that has really impressed us. He is a big, physical player, but he is also very technical and has the characteristics and the profile we are looking for. We believe we can help him develop and become a big addition at Dundalk FC.”

The Norwegian will provide adequate competition up front for Patrick Hoban and David McMillan, with the latter expected to ratify a new contract at Oriel Park in the coming days.