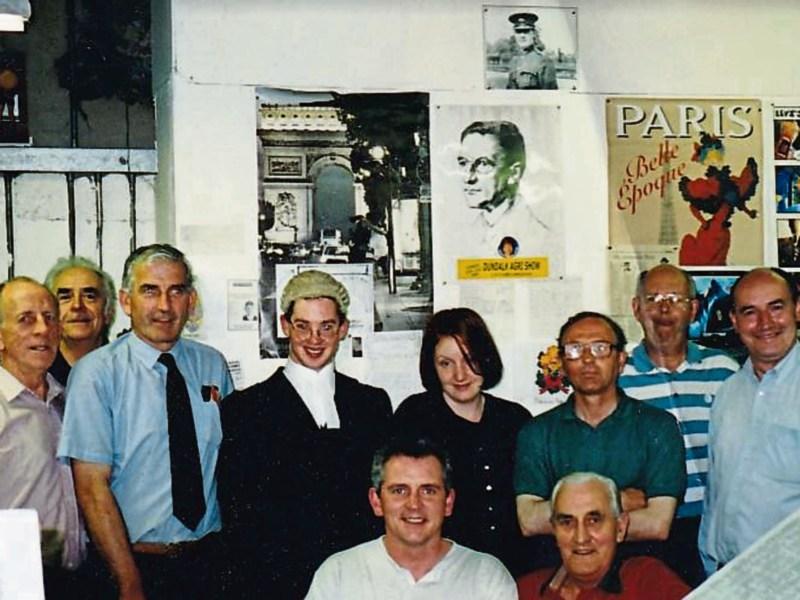 Attached is a photograph of a group of people in the 'setting room' in the cellar of the old Dundalk Democrat printing works at 3, Earl Street, taken over twenty years ago, at a time when the newspaper was at a stage of transition in technology.

At the centre of the group is the late Sean Bellew who died unexpectedly at a young age, dressed in his robes as a barrister, on a visit to the works about the time the Democrat was celebrating their 150th Anniversary of its foundation in 1849.

The reason I would like my readers to see this picture is that I believe Sean, along with his father Jimmy Bellew of Bellew Print, Park Street, played a pivotal role in the Democrat changing of the method of production of the paper from 'hot metal' to digital.

The Bellews had long been associated with the Dundalk Democrat; Sean's grandfather, Michael, had taken a fatal heart attack while working at a linotype machine back 1953 and his son Tom, three times Chairman of Dundalk Urban District Council, who also died at a fairly young age, was a good friend of the journalistic staff of the paper for many years. Sean's father Jimmy, tells me that he had been offered an apprenticeship in the works after his father's death but opted to start with Dealgan Press (Tempests).

Sean, himself however, came in to help in the works by showing printers who were just starting to learn to use computers at a time when he himself was studying for the Bar examinations and, indeed, set many of the articles that appeared in the newspaper at the time.

Sean was a brilliant young man who was fluent in several languages and I am not sure that he was ever properly remunerated for his part in saving the Democrat at a crucial time in its existence. He was also a very likeable person and he showed his generosity by coming into the works in Earl Street, dressed in his court robes, on the day he had graduated. As can be seen by the photograph, he was very welcome there to pose with members of the printing and journalistic staff!

The Editor/Owner of the paper, Tom Roe, who died at this time of year in 2001, after the Democrat had been sold, is not in the picture but I know that he also had a very high regard for Sean. There are, however, three persons in the picture who held the editorial position and they too were well aware of Sean's great ability.

At the front of the group is Pat Coburn, one of the younger members of staff at the time who, perhaps, was the best equipped to make the change in the printing technique and alongside him is the late Johnny McEvoy, Dublin Street and Vincent Avenue, who was one of the longest serving members of the Democrat printing staff and the last 'Machine Man' to run the old Cossar press before the printing moved to the Angle Celt Works in Cavan.

At the back (from left to right) is Frank McCabe, Hill Street, lino-man and computer operator, whose father also worked for the Democrat; Peter Kavanagh (then Editor of the paper); Joe Carroll, (later Editor and still writing the popular 'Inside Track'), another second generation Democrat printer turned journalist; Sean himself; Anne Campbell, young reporter who later joined the Argus; Jimmy McNamee (frequent visitor and a fanatical Dundalk soccer supporter); Frank Conroy, Hill Street and Ashbook, (last Democrat 'Stone Man' who laid out the pages) whose father Ownie was one of my favourite 'old time' Democrat printers and last but not least, Gerry Prendergast, another printer who moved on to sports writing and became an Assistant Editor in more recent times. Gerry has not been too well himself for some years, and deserves special commiserations on the unexpected death of his twin brother Harry, Meadow Grove, just last week.

Before moving away from the photograph, some readers may be interested in the posters on the wall at the back. Eamon de Valera takes pride of place but, above him, somebody has stuck a photograph of General Michael Collins --- which may give some indications of the divided political loyalties among the staff of Democrat. Another poster is a copy of the famous poster/painting by Toulouse-Lautrec, promoting tourism in Paris during the 'Belle Epoque' era before World War One, while another seems to be pages from a magazine of comic book characters. There certainly was a great diversity of tastes among the printing staff of the old Democrat!