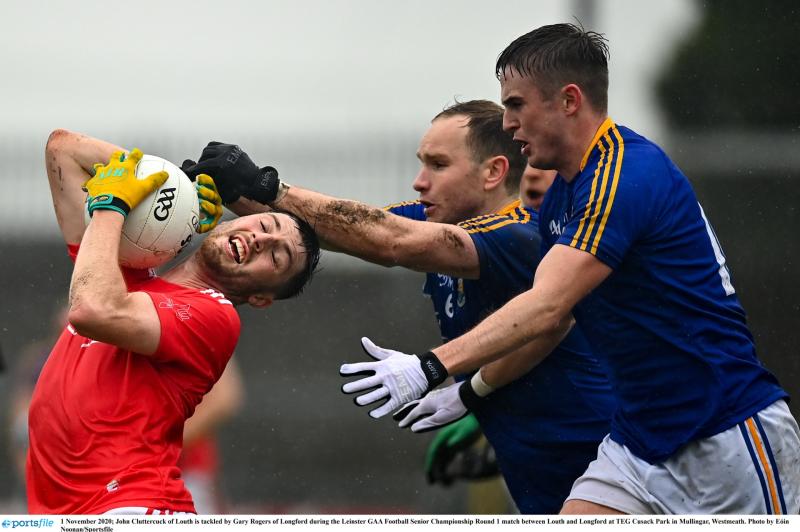 Is the fact that Sam Mulroy was Louth’s only scorer in Sunday’s Leinster Championship defeat by Longford grounds upon which to grin or groan?

The Naomh Máirtín forward was hailed by his manager, Wayne Kierans, as “not just an outstanding player, but outstanding young man” and future Reds skipper after a most disappointing defeat which draws a line under a hugely concerning campaign.

Kierans’ post-match assertion that Louth “aren’t a free-scoring team” is most accurate and the Mullingar loss was indicative of that, yet it was an affair in which the losers could so easily have emerged victorious.

Longford, by the standards they set last winter and spring, were underwhelming in sodden conditions and so Louth dominated both in the possession and territory stakes, albeit lacking the rudimentary ingenuity, craft and guile to laser their way through an often packed rearguard.

It could also be argued that Longford’s defensive wall was a symptom of the Wee County’s lethargic, paceless approach to attack. Too often it took multi-phase moves to even breach the halfway line, by which time Mulroy and his inside colleague, Conor Whelan, were kept warm in the chill by several bodyguards in blue.

And the game’s one glimpse of quality, aside from the individualistic kind, produced the decisive score when Longford midfielder Darren Gallagher was integral to an incisive handpassing move that yielded the No8’s first half major.

The Reds had been dominant during the opening 10 minutes but were 1-2 to 0-1 in arrears having failed to punish an uncharacteristically slow start by the winners. But that was the encounter’s tale: Louth were dominant for longer and yet unable to convert the sum required to book a quarter-final set-to with Laois.

Victory here would also have strengthened the case for Kierans’ reappointment, and possibly afforded reason to allow him continue his investment in youth. Six players made their championship bows at Cusack Park, four, including Dermot Campbell at full-back, as starters. Seven of the 20 players-used previously played minor football under the O’Connell’s man.

There was vast consensus that Mulroy was the match’s outstanding performer and likely the first player in history to have scored his county’s entire championship tally. Be it off right foot or left, the powerful Monasterboice native was an omnipresent touch of class in a game desperately low on high-calibre.

He opened the scoring from a free on three minutes and ended his team’s 17-minute barren spell in advance of gathering possession in the left corner of the Dunnes Stores end, soloing past two or three defenders and firing a shot off the near-hand post and into the far corner, levelling the encounter seconds ahead of the half-hour mark.

Himself and Gallagher exchanged a pair of points before Daniel Mimnagh gave Longford a 1-5 to 1-4 interval advantage that, on the basis of play, they failed to earn.

Could Mulroy have been moved into the middle sector of the field? Perhaps. There, he could have picked out passes to those closer to the target and gone again to receive possession when running at pace in the desired direction. Any flurry of long-range registers would have been out of the ordinary and may have given Louth a winning platform. He was the only capable executor of such a plan.

As it was he had to fight as though practising MMA on every occasion the leather was punted his way, with referee David Coldrick, who was inconsistent and poor, very slow to award frees.

Whelan’s half-time withdrawal was surprising, especially with his replacement, Paul Mathews, not the scoring option that was needed. And while the list of reserves wasn’t lush with men adept to aiding Mulroy in the finishing department, the later introduction of Conor Grimes did sharpen Louth’s offensive axe for the closing grind.

Most agonising about the loss was the failure to capitalise on Longford’s failure to score from 39th minute to the hour. Mulroy, hit a brace in the meantime -- his second was a stunner -- but Louth really ought to have taken firm control. They would have had Paddy Collum not got a foot to Anthony Williams’ goalbound arrow.

Ultimately, it was a ghost from Louth’s past, Robbie Smyth, who led the Midlanders to a qualifier victory in Drogheda three years ago, that swayed the triumph. Having won and converted a mark, the Abbeylara clubman shot over marvellously in the dying embers to seal victory.

Louth, in their desperate bid to salvage Delaney Cup hopes, resorted to carrying the ball into tackles and cheaply giving away the ball amid a frantic spell of additional time.

Just another one that got away.