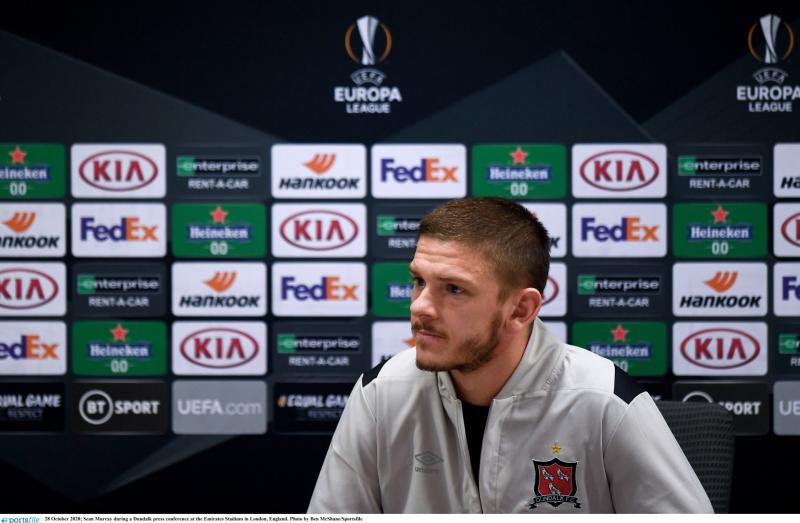 Fresh from his third Europa League goal in as many games against Molde last week, Seán Murray feels as though his move to Dundalk FC over a year ago has finally been justified.

During his time as a Watford player, Murray lined out in some of England’s top venues and on Thursday, he’ll be able to add the Emirates Stadium to that particular repertoire when Dundalk comes up against Arsenal in the second match of the Europa League group stages.

It's been a long journey for a player whose first season at the club was plagued with injuries.

“This is the reason why I came to Dundalk in the first place,” Murray said to media.

“It was for the chance to play European football and this season, we’ve made the most of that and it’s given us these opportunities.”

The Lilywhites come into this game as overwhelming underdogs, but Murray believes that if last week’s first-half display against Norwegian champions Molde can be replicated, then Dundalk have every chance of frustrating Arsenal and cause what would be a major upset.

“As you saw in the last game, we did that for a good 45 minutes against Molde. We frustrated them, we limited their chances and got the goal just before half-time.

“It’s going to be difficult, but I think that’s where we just need to show a bit of confidence, a bit of bravery and to take the ball and do our best with it because our chances are going to be limited. We know that, but we need to do the best we can.

“We’ve worked hard to get to this stage as it is and we’re not going to come here and just let the points slide. We have to give everything and have a bit of confidence that we can cause an upset.

“We’ve had a look at the games they’ve played and obviously they are a great team, but there is some weaknesses there if you could say that. It’s stuff we have to work on and try and punish.”

Over the weekend, Filippo Giovagnoli stated that qualifying for Europe via the league was Dundalk’s immediate priority, hinting that the Arsenal game would, in fact, take a back seat.

That’s because one win from their remaining two league fixtures would guarantee a place in the inaugural Europa Conference League next year. Their next league game comes this Sunday in Inchicore against St. Patrick’s Athletic, who last night lost 3-2 at Finn Harps.

Murray has echoed Giovagnoli’s sentiments and suggests that simply staying competitive in what is a difficult Europa League group is the best Dundalk can hope for in this campaign.

“I think the best thing we can do this year is give a good account of ourselves in Europe.