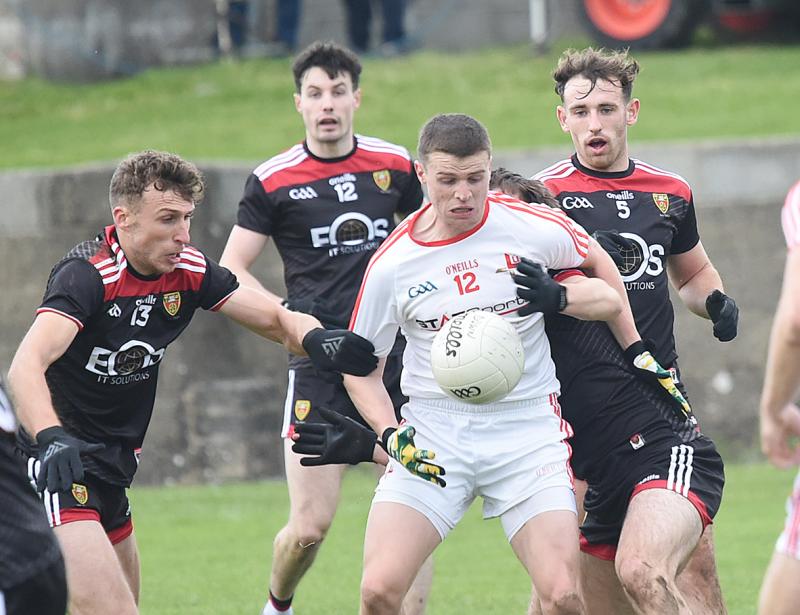 Louth saved their best display of an otherwise dour National League campaign to last as they consigned a promoted, if desperately poor, Down to defeat at St. Brigid’s Park on Sunday afternoon.

Indeed, it was a Wee County performance that will inspire confidence through the panel as they approach this weekend’s Leinster Championship encounter against Longford; the additions of Conor Whelan, Dermot Campbell, Eoghan Callaghan and Ciarán Keenan to the starting XV inputted an energy and sense of purpose to the line-up which were the key to a much-needed outcome.

Manager Wayne Kierans may even have stumbled across his neatest blend of components with Campbell, Callaghan, Tommy Durnin and Bevan Duffy, Keenan and Sam Mulroy up the middle. And with that sextet flanked by the energy of Anthony Williams, John Clutterbuck, Liam Jackson and Conall McKeever, the Reds looked so much stronger than when trudging off the pitch at Páirc Uí Chaoimh eight days earlier.

Notwithstanding Louth’s major improvement in both organisation and intensity, Down played into their hands in Dowdallshill. The Mourne men’s build-up was far too ponderous and offensive ventures regularly lacked momentum, leading to depressive spells of lateral ballwork.

CLINICAL COMPOSURE
Louth, therefore, were able to filter back into position before springing lethally on the counter-attack, three or four forward passes often enough to find entry to the scoring zone where Sam Mulroy and the shoals of inrushing runners were the beneficiaries. Campbell, Durnin, Duffy and Jackson each registered from fast-flowing sequences down the field.

But the basis for Louth’s victory was built on defensive solidity with Campbell and Callaghan vital in bringing the class of composure that was so lacking in all their prior efforts. Kevin Carr’s clampdown on Donal O’Hare meant blunt Down could only score from distance, which Dylan Ward and Ryan Johnston did confidently ahead of half-time.

Not that Louth were flattered by their 2-7 to 0-9 interval cushion, Keenan and Mulroy hitting the net on 11 and 32 minutes despite facing into the stiff, bitterly cool breeze that gusted towards the Newry Road.

The second major was sublimely configured by McKeever, whose workrate, pace and accurate delivery to Mulroy from the flank saw the Naomh Máirtín sharpshooter compose himself before picking out the roof of the target off his weaker left foot.

STOOD STILL
Contrastingly, the closest Down came to enforcing a green flag wave was through Ryan Johnston, the leggy Kilcoo winger cutting into Wee County territory only to fumble in his battle to outwit Louth custodian Craig Lynch. The opportunity, at a time when the hosts’ lead amounted to little more than two points, was critical to how the match panned out thereafter.

Kierans’ crew were in pole place for a maiden triumph in Division Three, one imagined, with the conditions in their favour ahead of the restart. But the weather played no part in a confident second half return which produced a further 1-7; the flags which arrowed stiffly in the direction of the clubrooms during the opening period, after all, stood motionless when the action resumed; the chill of the October afternoon lessening in turn.

And Louth’s play will have kept the Down defence very warm.

Within six minutes the margin was extended by three to seven overall and after John O’Hare’s disastrous kickout was gathered, carried and dispatched to the goal by McKeever, the lead was nine.

The visitors gained a degree of scoreboard respectability with a late flurry but they will require huge improvement for their Ulster trip to Fermanagh; that is if they’re to avoid another early provincial departure..

For the second season on the trot, Louth have beaten Down in the league’s final round. Overall, though, the pair’s campaigns couldn’t have been any more different.