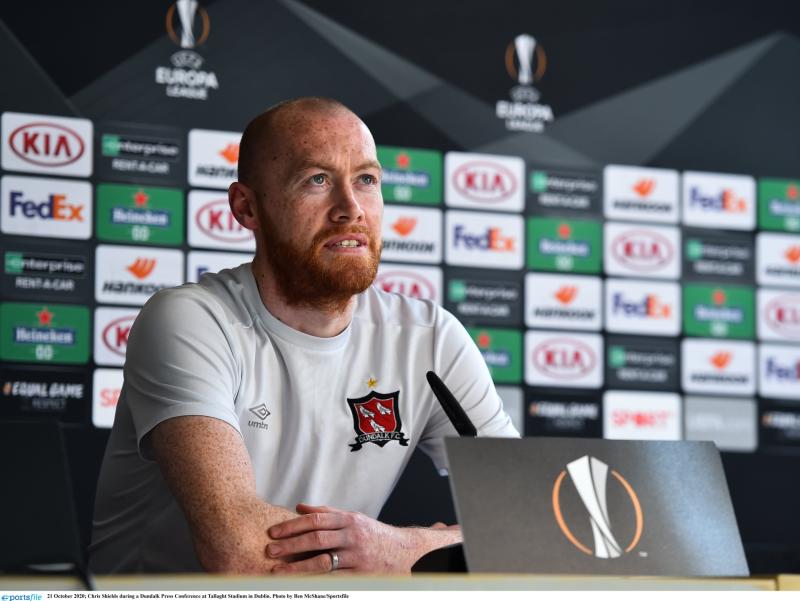 Chris Shields sees plenty of similarities between Dundalk FC’s upcoming Europa League group opponents to the teams they faced at the same stage of the competition four years ago.

Dundalk begin their group stage odyssey against Norwegian champions Molde FK tomorrow night at Tallaght Stadium and will also come up against English giants Arsenal and Rapid Vienna of Austria in what shapes up to be an extremely difficult pool for The Lilywhites.

“It’s quite similar,” said Shields at today’s presser. “Last time we drew Zenit, who I believe were the highest ranked team in the competition and I believe Arsenal are this time as well.

“Then you look at Rapid Vienna and Molde, so it’s much similar to the group we had in 2016 maybe. You’ve got to take each game as it comes, especially considering these clubs are more experienced in Europe than we are. But, you can’t go in expecting to get nothing or you’ll get nothing, so you have to go in hoping to win points and this is what we’ll be hoping to do as a group of players.”

With the club’s ownership frequently shrouded in controversy, it’s been a turbulent season on and off the pitch for Dundalk this season. Shields is just as surprised as anyone that the team now finds themselves among some of Europe’s elite for just the second time in their history.

Shields is one of the eight players who remain at the club from their first foray into the group stages in 2016 and he’s hoping that level of experience will prove useful in the 2020 edition.

“We may not have thought we’d be in this position given the domestic upheaval we had especially after lockdown, but we’re happy to be here again,” he added. “There’s a good group of lads who were here since 2016 which I suppose will only benefit us now because we were all fresh to it there in 2016 and now we have lads who have been there and played in it which can only help.”

One of the major criticisms of the club’s owners, Peak6, surrounds the current condition of Oriel Park, which has been deemed, by UEFA, unfit to host Europa League group matches.

Tomorrow’s opener with Molde was originally scheduled to take place at the Aviva Stadium, but a well-documented dispute with the IRFU saw the game switched to Tallaght Stadium.

Dundalk have enjoyed some memorable European nights in Tallaght in the past and Shields is hoping that The Lilywhites can create another special occasion at the Dublin venue before welcoming both Rapid Vienna and Arsenal to the Aviva in November and December.

“Tallaght is still a great facility. We know the pitch well, we know the surroundings very well, we play here twice a year every year and we’ve had some memorable nights here in Tallaght in Europe as well. We’ll be hoping to add to them tomorrow night.

“The Aviva pitch obviously looks huge because of the surroundings of the stadium around it, but this pitch is big. A big pitch always suits our style of play, but maybe it impacted the performance against KI because for a few lads, it was their first time in a situation like that and there might have been some nerves about it. That’s a good thing to have under the belt now coming in to these group stages because we’re going to come up against teams on big, expansive pitches wherever we play – whether it be the Aviva, the Emirates, in Norway or Austria.”

Norwegian international midfielder Magnus Wolff Eikrem is undoubtedly Molde’s key player and Shields knows that he’ll have his work cut out tomorrow night in his attempts to stifle the man who has previously played in the English Premier League for Cardiff City.

“We done our video session on them yesterday. We really have to hone in on their strengths and their midfield goals are a strength, but they pretty much score from everywhere. Their full-backs even have goals, but for me personally, it will be my job to stop their goalscoring midfielder (Eikrem) from scoring goals.”