Storm Alex: What weather is Met Éireann forecast the storm will bring to Ireland this weekend? 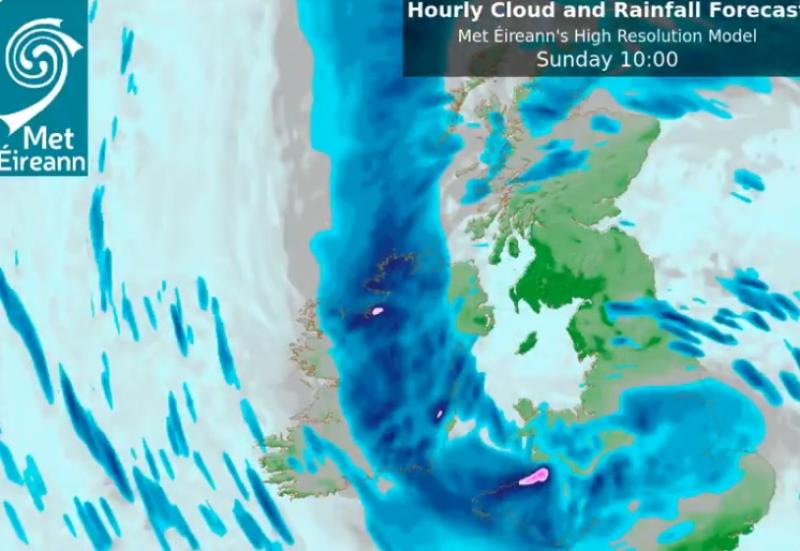 Heavy rain set to be a big feature of Storm Alex

Storm Alex is set to sweep in heavy and prolonged rain leading to a risk of localised flooding in gusty winds this weekend.

Met Éireann expects the storm to push in from the Atlantic over France, Spain and Britain before its impact is felt in Ireland on Saturday into Sunday as it swings back to the east over the island.

The forecaster says at times heavy rain will hit the north and east of the country overnight Saturday. Spot flooding is on the cards. Winds will be fresh and gusty.

Sunday will start with Alex bringing heavy and prolonged rain in most parts. Flooding is again possible. The rain will clear from the east. Gusty winds will ease as the rain clears to the west.

Met Éireann issued a Status Yellow weather warning on Friday afternoon for counties in the northwest of Ireland. Heavy at times intense rain with up to 40 mm is expected. Met Éireann has warned that river surface flooding may result. The warning is valid from 7am to 9pm on Sunday.

It advises people to stay tuned to the weekend forecast as Storm Alex hits.

The summary outlook is for wet and blustery over the weekend with unsettled conditions set to continue through the week ahead. More below tweets.

Here is the latest cloud and rainfall forecast from our HARMONIE weather model. It covers the period from now until Sunday afternoon. Some isolated showers around today, but mainly dry. More weather forecast details for the weekend ahead here: https://t.co/9gKN6SVok4 pic.twitter.com/swunwZ9KDr

Here is the latest Atlantic Charts - 7 Day Forecast. These charts show forecast pressure and precipitation every 6 hours for the next 7 days. Low pressure swirling near Ireland will bring unsettled weather over the coming days.https://t.co/9Giuj4CR5mhttps://t.co/9gKN6SVok4 pic.twitter.com/szvKg1Wu7r

SATURDAY
A bright start for most areas tomorrow and mainly dry. Cloud will increase through the afternoon with scattered showers developing in the west, while rain will pushes in from the east through the evening. Highest temperatures of 9 to 13 degrees in moderate to fresh northerly winds.

Rain in the east will extend westward to affect much of the north and east of the country overnight Saturday. It will be heavy at times with a risk of spot flooding. There will be a mix of dry spells and scattered showers elsewhere. Lowest temperatures of 7 to 9 degrees in moderate to fresh and gusty northwest winds.

It will start off wet in most areas with heavy and prolonged rain leading to a risk of localised flooding. Eastern parts will begin to clear during the morning, however the rain will persist in the west. Highest temperatures of 10 to 15 degrees in moderate to fresh, gusty northwest winds, which will ease light northerly as the rain clears.

The rain will gradually ease overnight, becoming more showery in western parts on Sunday night. Remaining mostly cloudy and dry in the east with just the risk of isolated showers. Lowest temperatures of 7 to 9 degrees in mostly light to moderate northwesterly winds.

A band of showers or longer spells of rain in the southwest will slowly extend northeastwards, with the best of any drier brighter conditions through the day in the northeast. Highest temperatures of 11 to 15 degrees in light to moderate westerly or variable winds.

The band of rain will extend to north and northeastern parts becoming heavy at times overnight. While further showers will follow from the southwest. Lowest temperatures of 6 to 9 degrees in light to moderate westerly or variable breezes.

Further heavy showers will feed in on a moderate to fresh and gusty northwest wind. Highs of 11 to 13 degrees.

Tuesday night will see showers will mainly become confined to western coasts with clear spells developing. Lowest temperatures of 5 to 7 degrees in a moderate to fresh northwesterly wind.

Further outlook: Remaining unsettled for the remainder of the week with further spells of wet and windy weather