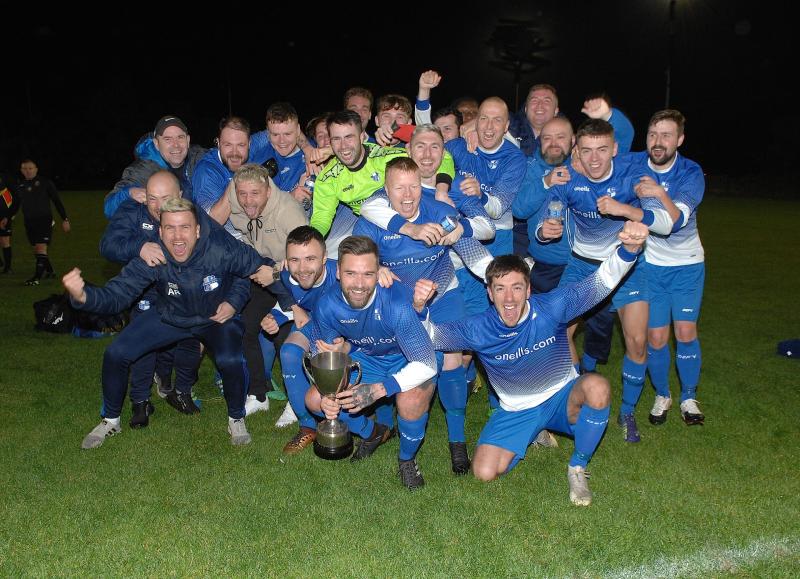 A nine goal thriller saw Muirhevnamor come back from 3-0 down to win 5-4 two minutes from time with a Josh Wilson goal, to lift their 13th title - their very first coming in the 2000 season.

They overtook longtime leaders Bay F.C. by two points to push them into second place.

Redeemer started well with Sean Bailey seeing his shot touched onto the post by Padraig McConville after three minutes of play. On 20 minutes a brilliant Conor Mackin free from the edge of the box put Redeemer 1-0 ahead.

Within minutes Kevin McCormack made it 2-0 after cutting in from the left with a low shot to the far corner. The half hour mark saw Sean Bailey stretch the lead to 3-0 with his 5th strike of the campaign. Shortly after a dangerous Muirhevnamor corner was headed into his own net by a Redeemer defender to leave the score 3-1 at half-time.

Paudie Hearty reduced the deficit to one goal in the 63rd minute with his 5th strike this term.

Cillian Rice the Redeemer keeper took too long to clear a back-pass and his kickout hit Luke Gorham and ended in the net to level the score a minute later.

A brilliant header from Paddy O'Connell from Ray McCann free regained the lead for the Gorman Park side in the 75th minute. From the penalty spot Micky OKane drew the sides level once more at four goals a piece with 80 minutes played.