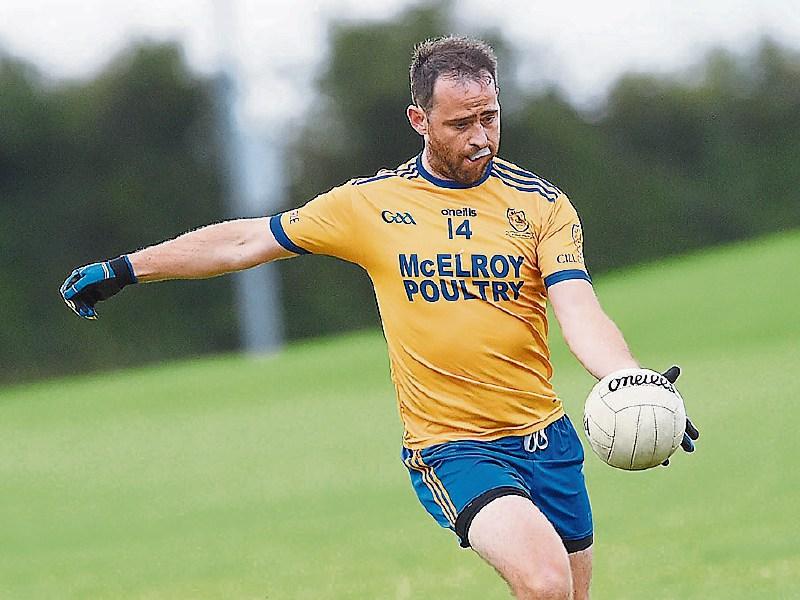 Twelve months on and Kilkerley Emmets joint manager Shane Lennon is right back to exactly where he and his club wanted to be, competing for the Seamus Bellew Cup.

“Hopefully it goes better than last year,” quips Lennon when asked to reflect on reaching intermediate decider again. Their course has seen them navigate a global pandemic and really grasped the new mark rule in between.

“The year that is in it, if someone offered us a place in the intermediate final at the end of the year we obviously would have took it. Obviously we have things to work on, you don't ave much of a time frame but it is not a bad thing either.”

Lennon has been to the fore alongside Tadhg McEneaney in their high scoring run to the final, they’ve clearly worked on the new rules but Lennon acknowledges the impact of youth on himself and this years squad. That mix he feels is key to Kilkerley’s success so far.

“We went very young at the start, Lennon revealed.

“Our hands were tied a wee bit, with James Fagan picking up a knock during the week he should be okay for the Saturday but the the Murtagh's, Brady, Ewan McEnteggart and even McGlynn like, he wants it, his point in the semi final was so inspirational.”

“We probably need a few elder men in the side like myself and Tadhg (McEneaney), I know Tadhg is not that old but Cathal Bellew and Ciaran Clarke too lads like that, you need those bodies.”

So with the age profile set to a healthy median, Lennon and his four joint man management team is looking to really learn from the mistakes of last season’s decider.

“We have a nice management team there. A good blend between us, Ciaran (Carragher) is an outsider, living in the parish but an outsider, he didn't know anyone and then we have Marc Clifford and Sean Doherty who are both, well, Marc is kind of a blow in as well! There is a buzz there with all the lads and hopefully, it is a short turnaround but we had the extra day which is big too.

“We played on Mattock's terms last year, we kind of let them dictate to the way we were going to play. We got caught then in the first ten or fifteen minutes and we have learn from that. We're probably at a wee bit of an advantage in that we had a chance to see who we are playing. and see what way we should set up.”

It is going to be a local derby heading up the road to Knockbridge. I know there will be a dispute in my house! My woman's a Knockbridge woman, but we know plenty of the Brides but it is all about us.

The Lennon name is synonymous with the Kilkerley club, his history and his families history is the very fabric on the club. Lennon is aware of this at all times especially when pushed on his dwindlin playing days and his father’s history that went before him. He sums up what it means in one word.

“I don't want this to sound bad but I probably don't have many years left in me and I just thought like why not put my shoulder to the wheel my father done it, played as player manager. I know they were beat in the final in '86 I just decided why not like!?

Obviously his was a senior, ours is intermediate but it is massive still. It is the 80th year of the club which is an anniversary year even when we took the job in January we said that, before COVID or anything like that; we said it was a big year for the club and how unbelievable would it be to win the championship.”