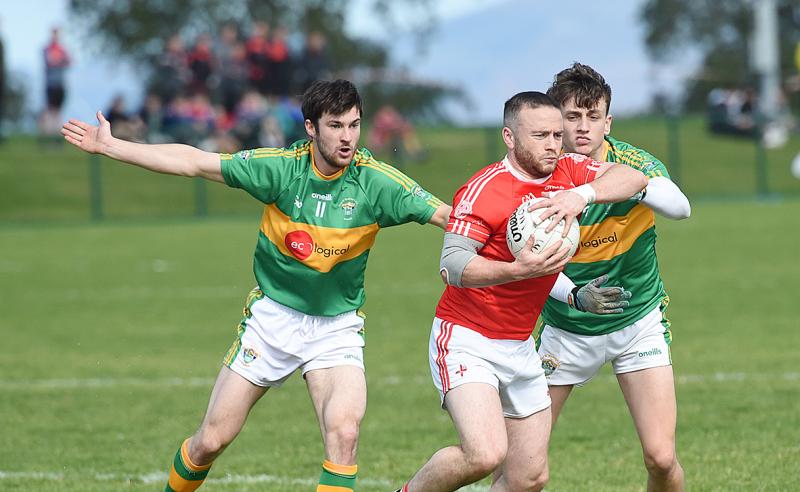 Kilkerley Emmets set up a meeting with neighbours St Brides in the Intermediate Championship Final after coming through a tight contest against St Fechins at Darver on Saturday evening.

In what proved to be a well-contested game, the Emmets were that bit more clinical over the hour and goals from Daniel McKeown and Fintan Brady in the second half proved the difference between the teams.

After a relatively slow start from both teams, the Fechins broke the deadlock when a foul on Eoghan Duffy was converted by Ryan Walsh. However, a foul just outside the ‘45’ at the other end of the field allowed Shane Lennon to equalise.

Following an accurate kick out from Niall McDonnell Fechins went straight back up the field and Ronan Holcroft got the first point from play quickly followed by another from Sean Kerrisk. It was very stop-start with Noel Hand giving out four yellows up to the water break, at which point the Fechins held a 0-3 to 0-1 lead.

Kilkerley got the first after the water break after a foul again put over by Shane Lennon, it was quickly followed by a lovely score from play from Ryan Walsh and following a foul on the same player Ronan Holcroft put another over the black spot. Both teams exchanged points, getting three more each, Fechins from Ryan Walsh (2) and Joe Corrigan, and Kilkerley from Lennon (2) and Ciaran Bellew to make it 0-8 to 0-5 at the break.

It was Kilkerley who got the better start after the break getting two in quick succession but a point from Eoghan Duffy kept the Fechins ahead before another Lennon score brought them within one point.

Substitute Niall Devlin made his presence felt scoring a point quickly followed by a second from Eoghan Duffy both of which might have had a shot under the bar. Joe Corrigan made a great run from the centre but was denied a goal following a save from Rian Hand.

A converted ‘45’ from goalkeeper Niall McDonnell brought the scores back to a four point game in the 39th minute.
Kilkerley then struck their first goal of the game through Daniel McKeown but they suffered a setback when Ciaran Bellew was sent off on a second yellow and Ryan Walsh converted a free to open up a 0-13 to 1-8 gap.

After the water break Kilkerley came back with two points in quick succession to bring the match to a draw before two more frees saw them take the lead.

Harry Haughney popped one over only to put another wide a minute later but a ball handled on the ground gave Kilkerley another shot and Shane Lennon continued to increase his tally with another point to let them go two ahead again.
Ronan Holcroft pulled another back for the Fechins but they were soon down to 14 when Walsh picked up a black card.
The North Louth side added two further points before securing the win when Brady fired in the second goal.

St Brides set up a meeting with neighbours Kilkerley Emmets in the final of the Intermediate Championship after coming out on top against Sean O’Mahonys at Darver on Sunday afternoon.

As predicted, this was a tight and competitive affair from the outset but the Knockbridge men just had that extra edge and emerged as deserving winners. The O’Mahonys battled all the way as the fought to remain on course for an immediate return to the senior ranks, but in the end it was two first half goals from Andrew Smyth and Emmet Kirk that made the difference.

The Brides took an early lead in the game but it was the O’Mahonys who landed the first real blow as Ben McLaughlin got in for the first goal of the game on five minutes to give his side the early advantage. It didn’t take the Brides long to respond and with Patrick Reilly and Sean Marry among the scores they hit back to level the game five points apiece, before Smyth fired in their first goal and open up a three point gap with five minutes remaining in the half.

It got even better for the village side just before half time as Emmet Kirk reacted quickest after an effort came off the post to force the ball into the net and put his team 2-6 to 1-3 ahead. With Stephen Kilcoyne continuing his good scoring form, the Dundalk men were still in contention entering the closing moments of the half when they reduced the deficit to four points. However, they couldn’t conjure up the goal they needed to rescue the game and the Brides deservedly held out to claim a place in the final.