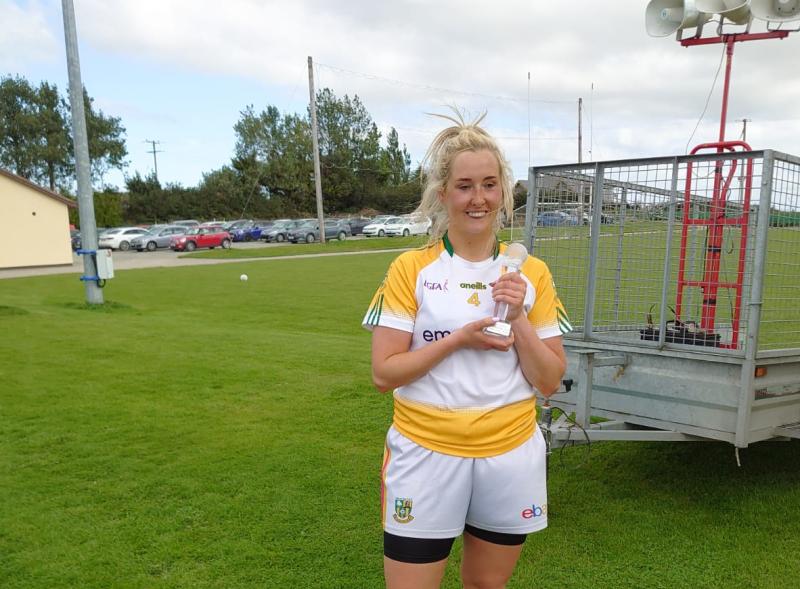 Clan Na Gael 3-07 Naomh Fionbarra 2-08
This year's Louth LGFA Championship has produced many outstanding matches this season, and this Intermediate final was no exception.

Two well-prepared teams who approached the game in the right way with the winners tally of 2-01 between the ninth and eleventh minute proving crucial to the final outcome.

The opening stages were even with Clans taking an early lead with points from Cara McKeever and Denise McKenna. Aideen Dunne had Finbars on the scoreboard before the Togher side had a chance to take the lead as Ciara McMahon was fouled. After consulting with his linesman Referee Kevin Carroll awarded the penalty which McMahon scored at the second attempt after Clans keeper Mia Rogers had pushed our her first attempt in the sixth minute.

After Ciara Woods had a Clans point, the Dundalk side hit two goals inside sixty seconds, the first coming as Alannagh McLaughlin scored a sensational goal after a great run through the heart of the Finbar defence and sending a brilliant shot beyond Annmaree Breen. Shortly after Breen was again picking the ball out of the again with McLaughlin playing a key role as she turned provider setting up Denise McKenna to hammer into the net. A fine score by Woods extended the lead to six, but Finbars, with ex Louth goalkeeper Stuart Reynolds, issuing instructions from the sideline fought back strongly as a Amy Grant effort was parried by the Clans keeper with Laura Sharkey picking up the rebound and firing a superb shot into the net from a difficult angle just before the water break 2-4 to 2-1

McMahon hit another well-taken point before Clans replied with an outstanding long-range point from ex Fingalions star McKenna. McMahon and Woods swapped points as Clans led by 2-6 to 2-3 at the break. Clans extended their lead shortly after the resumption when Ciera Woods won possession from a '45 taken by sub Deirbhle Tinnelly and lashed a wonderful shot to net. Denise McKenna from a free put Clans seven clear on forty minutes in what was Clans last score.

Last year's beaten finalists came storming back as Laura Sharkey, Ciera McMahon (2), Marie Doyle and Ellen Butterley all raised white flags to set up a frantic finish. Finbars did create a number of chances but were unable to get the scores to force extra time against a strong Clans defence

After the game player of the match Therese Curran spoke of her delight at the outcome.

"Who would’ve thought seven years ago when the Clans committee decided to put together a ladies football team that we’d be here as Intermediate champions and promoted to senior football."

She continued: "I was captain when we won junior B against a hearty Cuchullain Gaels team and there is still a lot of that team playing now that played that game.

"The Barr’s are a fantastic outfit they threw everything and the kitchen sink at us, especially in the last 10 minutes they never gave up, they really could’ve snatched it in the end but thankfully we held on!

"Our forwards have been talked about all season and rightly so, they are clinical in front of goals and many teams have had to play two sweepers in front of them, but I do think our defence has been super all season and especially today I think it won us the game. The Barr’s forwards are accurate and fast and we knew we would have our work cut out for us."

The Clan Na Gael captain added: "From their keeper out, there is not one weak link and it really showed yesterday they were super.

"It’s an amazing team that has been boosted by the likes of Pam, Denise, Janine and Emily over the last few years but to the younger girls that are coming up from minor competing for team places it’s a brilliant thing driving into training and seeing 25+ girls at training.

"Getting player of the match was a great personal achievement, we went out with a job to do and thankfully we were the right side of the end whistle.

"We are all delighted to be back playing with our friends this year after what has been a surreal few months. We'll make the most of the celebrations.

"On another note, I just want to say how fantastic it is to have such a presence of social media and how brilliant the streaming has been. I have family down in Kerry who have watched all the games and text me afterward, it’s deadly," added the Clans defender