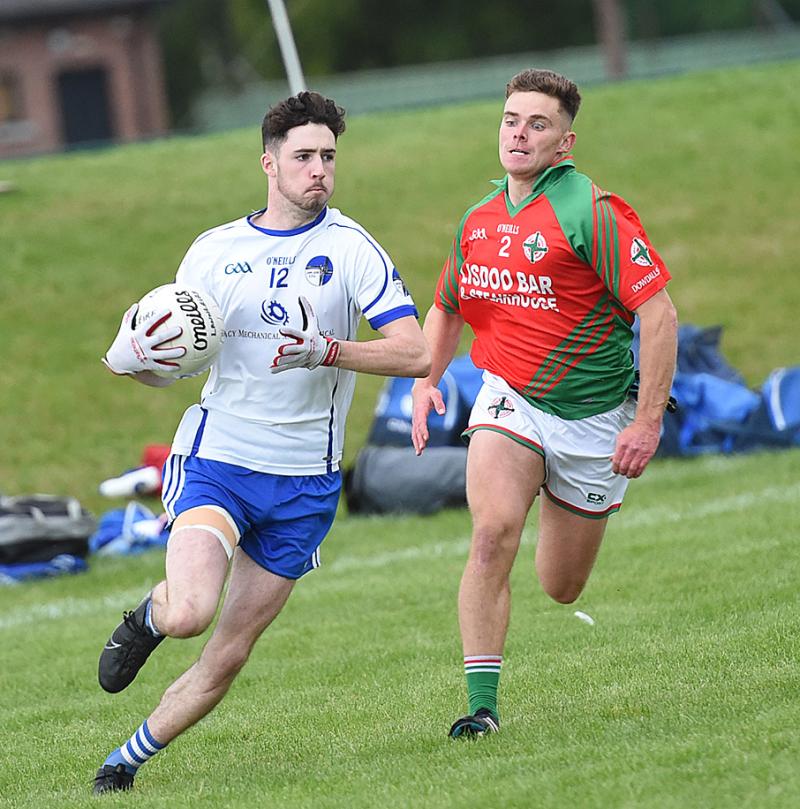 Lannleire maintained their recent fine form in recording a convincing win over Dowdallshill on Friday and so finish top of Group 2 of Louth JFC earning a place in the draw for the quarter final.

After a dominant first half display, Lannleire went in at the interval leading 2-12 to 0-3, the goals coming late in the half from Darragh Malone and Alan Murphy. Killian Gregory was in fine form for the Dunleer men, kicking six points in the opening 30 minutes.

Lannleire scored a further 1-9 in the second half, their goal coming from Ian Mulroy on 38 minutes. Pierce Hawkins and Alan Murphy both chipped in with three second half points each.

Jack Maguire for G Monaghan;  Jimmy Kearney for A Murphy.

Wolfe Tones recovered from a slow start to book their place in the quarter-final of the Junior Championship with victory over Nh Malachi at Darver on Friday night.

Goals from Dwayne Leavy and Eoghan O’Shea early in the second half proved the difference between the teams as the Tone joined Nh Fionnbarra in making it through to the knockout stages from Group 4.

Both teams went into this game knowing that victory would send them through and although the Drogheda side had the first score on the board, it was the Malachis who settled best in the opening quarter.

At the first water break the Courtbane men were leading by 0-3 to 0-2 and they looked to be in a strong position when they increased that gap to 0-6 to 0-3 after 25 minutes, with Colin Rooney leading the way in terms of scores.

However, the Tones rallied and got back on terms before the Mals had the final say of the half to go in leading by 0-7 to 0-6 at half time.

The game was very much in the balance but the decisive spell came just after the restart when Leavy found the net and O’Shea followed up with the second goal on 36 minutes.

A shell-shocked Malachis were unable to respond to that setback and could only add two more scores to their tally in the second half. The Tones were controlled the game well in the final quarter to deservedly take their place in the last eight.

Nh Fionnbarra recorded a comprehensive 18 point victory over Stabannon Parnells in Stabannon late Friday evening in the third round of the Junior Football Championship.

The Barrs started brightest and raced into a 2-5 to 0-1 at the first water break, with goals from Liam Shevlin and Darren McConnon. Further scores increased the Finbarrs lead to 14 at the short whistle.

Indeed, had the Barrs got their shooting boots on then the lead could have been more than 2-9 to 0-1 at the break.

It was more of the same after the restart and by the second water break the Togher men were 18 points to the good, with Liam Shevlin adding his second goal. In the last 20 minutes the Barrs rang in the changes as subs got some valuable game time.

Stabannon pulled a goal back late in the game but the Finbarrs ran out convincing winners.

As a result the Stonetown side qualify for the quarter-finals as Group 1 winners where they will be joined by runners-up Sean McDermotts.

The Omeath men got off the mark first through Calum Fearon but the tone was set for the game soon after when Annaghminnon got in for their first goal of the day through Conor Russell. Gaels responded with a point but Rovers were in a strong position at the water break when a goal from David Marron had them ahead by 2-2 to 0-2.

The peninsula side responded to the challenge as points from Jordan Loye, Micheal McCabe and Seamus McCabe along with a well-worked Rammie Phillips goal cut the gap to 2-4 to 1-6 at half time.

However, once again Rovers produced goals when they needed it as Dylan Mulholland scored just after the restart and followed up when  Conor Russell converted a penalty to put his side firmly in control.

Again, Gaels refused to lie down and with the help of a goal from Micheal McCabe, the deficit was just 4-5 to 2-8 at the water break. The Omeath men continued to hold the upper hand and successive points from Loye, Micheal McCabe and Marty Ward levelled the game.

It looked as if Cuchulainn would go on to complete the comeback but once again they were undone at the back when Rovers got in for their fifth goal through Aidan Lee Martin. Two late points gave Gaels hope but Annaghminnon survived a late goalmouth scramble to claim the win.