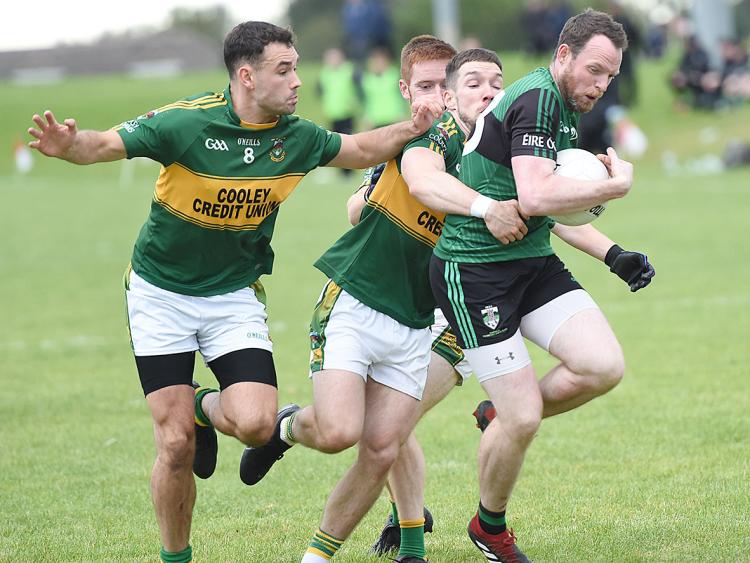 Roche Emmets scored eight unanswered points in the closing 20 minutes of this Intermediate Championship clash to claim an unlikely draw at Darver on Saturday afternoon.

St Kevins appeared to be cruising to victory when they led by 2-9 to 1-4 with 40 minutes on the clock but failed to kill off the game and a brave Roche fightback culminated in Barry O’Hare landing the equaliser.

However, despite the dramatic finish Roche only have a slim hope of making the knockout stages as only a very heavy defeat for the Kevins in their replayed game with St Brides on Tuesday night will see the Faughart men through.

It was Roche who made the brighter start with points from Liam Dawe and Kevin Callaghan before the Kevins got into their stride. With the help of points from Lee Crosbie and Cian Callan they were leading by 0-4 to 0-3 when Karl Martin scored the first goal of the game on 22 minutes.

Roche hit back with a well-taken goal from James McDonnell but the Kevins responded and a Shane Meade point had them leading by 1-6 to 1-3 at the break.

Within two minutes of the restart Patrick Clarke added a second goal for the Kevins and the same player added two points along with a TJ Doheny effort to leave their side 2-9 to 1-4 in front.

Few could have foreseen anything other than a Kevins win at that stage but missed chances gave Roche hope and they slowly reduced the gap. Callaghan,and David Quigley were on target to reduce the gap to one, before O’Hare levelled matters with his sixth point of the game.

Two goals in the opening 12 minutes helped set up Sean O’Mahonys for a victory that saw them advance to the quarter-finals of the Intermediate Championship.

Stephen Kilcoyne and Conor Crawley fired in the goals to ensure a victory that also means St Fechins will join the Dundalk men in the knock-out stages.

Stephen Kilcoyne took centre stage in the early exchanges as he opened the scoring with a point before adding a goal on three minutes. Keelan O’Neill got the Emmets off the mark but a second goal from Conor Crawley followed by a John O’Brien point had the O’Mahonys 2-2 to 0-2 ahead at the end of the first quarter.

Points from Conor Grimes and O’Neill helped cut the gap to just two points but the Point Road side hit back in the closing moments of the half and scores from Kilcoyne and Conor Finnegan had them 2-6 to 0-7 in front at the break.

Just after the restart Grimes found the net to give his side real hope and entering the final seven minutes the game was in the balance with the gap at 2-9 to 1-10.

However, it was the O’Mahonys who were able to find the extra gear in the closing stages and Terry Kelly hit the net on 58 minutes to seal victory.

Young Irelands got the better of Cooley Kickhams at Darver on Saturday evening to book their place in the knock-out stages of the Intermediate Championship.

In a must-win game for both sides it was the Dundalk men who deservedly came out on top and as a result they will join Hunterstown in advancing from the group, while Cooley finish bottom after two defeats.

Young Irelands began the game in confident fashion and got off the mark through James Prendergast after ten minutes. Caolan McCabe added a point before Prendergast landed two frees to put his side four clear after 20 minutes.

Cooley were struggling to find any rhythm at that stage but they were given hope in the final minute of the half when Paddy Johnson scored to only goal of the game to cut the deficit to 0-4 to 1-0 at the break.

Scores continued to be at a premium in the third quarter with Prendergast and Dean Maguire edging the Irelanders three in front.

Brian White scored Cooley’s first point of the game after 48 minutes from a free but the Dundalk men were in no mood to surrender the initiative and Peter McStravick replied almost immediately.

A very disappointing Kickhams side could only manage two further points as the Young Irelands held on to claim a deserved victory.

Despite a bright start and a strong finish from the Oliver Plunketts, Kilkerley Emmets were the dominant force for much of this encounter as they booked their place in the last eight of the Intermediate Football Championship encounter.

The Emmets appeared to be cruising to victory in this Group 3 encounter at Darver on Sunday night but in a dramatic finish the Drogheda side hit the net through Cian Brady and Andy Morgan to cut the gap to two. However, they left it too late to complete the comeback and as a result they finish bottom of the group while Kilkerley and Clan na Gael advance.

The Plunketts were quickest off the mark with scores from Dean Carolan, James Guinn and Niall Murtagh. However, that good work was undone by Shane Lennon who levelled matters with the first goal of the game.

The Emmets took control after that and points from Lennon, Tadhg McEnaney and helped them take a three-point lead. However, the Mell side rallied in the closing stages and a late point from Adam Brodigan cut the gap to 1-4 to 0-6 at the interval.

The third quarter saw Kilikerley continue have the slight edge but the Plunketts battled to stay in touch and when Luke Haggins landed a ‘45’ the gap was only 1-7 to 0-8 and the game still in the balance.

Kilkerley’s hopes were boosted by three fine saves from Rian Hand and they took full advantage in the final quarter when successive scores from McEnaney, Ciaran McGlynn, Lennon and Killian Kampes helped them lead by 1-13 to 0-8 as the game moved into injury time.

Subs Brady and Morgan struck for goal in quick succession to give them hope of a dramatic revival but it was all too late as Kilkerley held out for the win.