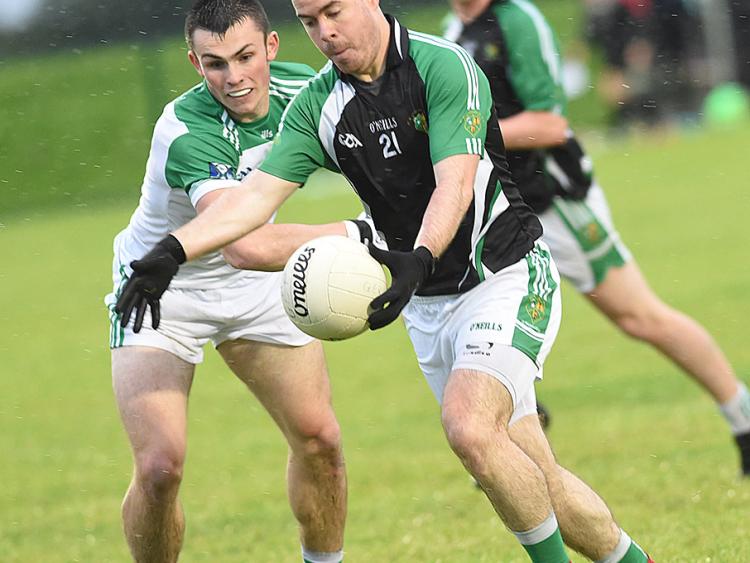 For the second successive week Geraldines were denied victory by a late equaliser as O Raghallaighs snatched draw in this Senior Championship Group 1 clash at Darver on Tuesday night.

Ben Rogan was the O Raghallaighs saviour as the found the target two minutes into injury time to ensure the Drogheda men went home with a share of the spoils after it looked as if Conor Rafferty’s point would win the game for the Gers.

Overall, few could argue with the result as there was very little to separate the teams throughout what proved to be a competitive affair.

In a lively opening, it was the Gers who were first off the mark through Jim McEneaney before the O Raghallaighs replied with scores from Rogan and Ruairi Moore. However, their lead didn’t last long as on ten minutes McEneaney struck for the first goal of the game to put his side back in front.

That was the pattern for the remainder of the half as the teams traded scores in the second quarter with Cillian Curran hitting the net for the O Raghallaighs. The Gers scores included an effort from Josh Arrowsmith but Ruairi Moore had the final score of the half to send his team in leading by 1-7 to 1-5.

It was more of the same in the second period but a goal from Rogan on 35 minutes kept his side in the driving seat. The Drogheda men looked the more likely winners when Barry Flanagan landed a point on 51 minutes to put his side 2-10 to 1-9 in front.

However, the McGeough Park side were not about to give up and a goal from McEneaney had them back to within a point. Late scores from Gareth Neacy and Rafferty looked to have snatched victory but Rogan popped up with the equaliser in injury time.

The Stonetown side turned in an impressive display against the elements in the second half and were rewarded for their efforts as they got their Group 1 campaign off to a winning start.

The Seans went into the game hoping to build on their opening day victory over Cuchulainn Gaels but will be disappointed with their performance on the night as they were unable to produce their best form despite an encouraging first half.

On a night when the poor conditions made it difficult for both sets of players, it was Annaghminnon who had the benefit of the elements in the first half. However, they failed to take advantage as it was the Mountrush side who went in at the break with a 1-5 to 0-4 advantage thanks to a goal from Lorcan Myles.

That lead appeared to be a sufficient platform to allow the McDermotts to complete the win, but they were unable to complete the job in the face of a spirited performance from Rovers.

David Marron and Conor Russell contributed important points to help the fightback while Dwayne Markey fired in the all-important goal to help his side get over the line.

In what proved to be a fine all-round team effort, Annaghminnon will be particularly encouraged by the displays from championship debutants, Diarmuid Murray, Tiernan O’Brien, Tomas Byrne, Dwayne Markey, Dylan Mulholland and James O’Connor.

On a disappointing night for the Seans, Danny Commins and Cormac Walsh were their better performers.