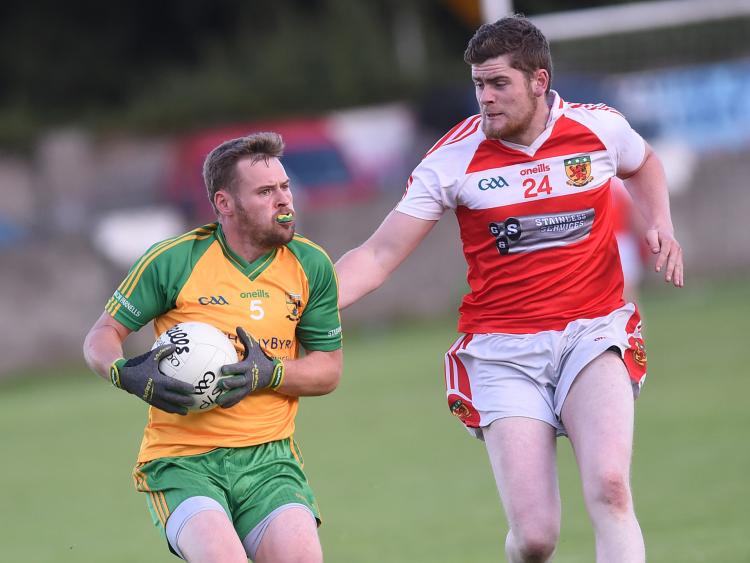 Lannleire began their quest for the Christy Bellew cup with a hard earned but well deserved victory over Glyde Rangers on Friday night in Darver.

The Dunleer line up was short a couple of familiar faces but the strength of their panel came to the fore with each player's willingness to work hard for one another allied to a strong level of fitness, demonstrating that the Dunleer men can be considered genuine contenders for the 2020 JFC title.

On the night there were many fine performances, with the full back line of Jason Torris, Paul McGeough and Thomas Doyle all excellent in shutting out the much feared Glyde Rangers full forward line.

Lannleire had a two points to nil lead when the first water break arrived after 15 minutes, Bob Murphy and Killian Gregory, the scorers. When play resumed, Caoimhin Maher and Killian Gregory extended the lead to four points before Trevor O'Brien opened Glyde's account with a point after 25 minutes which was added to by a Ciaran Sheridan free a couple of minutes later.

With half time approaching, Niall Lennon was fouled in the small square with Killian Gregory stepping up to dispatch the resulting penalty expertly past the Glyde keeper, David Brennan, to leave Lannleire leading 1-4 to 0-2 at the interval.

Killian Gregory pushed Lannleire's lead out to six points with a free on 36 minutes before a high delivery by Gareth Moran deceived Liam Callan in the Lannleire goal and Glyde were just three points behind, which became two when Peter Duffy pointed after 43 minutes.

Lannleire responded positively though and Gary Monaghan from a position out on the right wing sent in a high ball which went over the head of the Glyde keeper for a goal very similar to Glyde's major a couple of minutes earlier.

A Glyde free reduced Lannleire's lead to four points before the final water break. When play got going again, the Dunleer men were determined to protect their lead and all Glyde's attempts to breach the Lannleire defence were thwarted by resolute defending. When Killian Gregory pointed a free on 53 minutes, Lannleire went five points clear and the victory was assured when Darragh Malone showed great composure to score Lannleire's third goal on 56 minutes, his low drive beating David Brennan in the Glyde goal. The final score of the game was a Ciaran Sheridan free for Glyde.

Nh Malachi revived their Junior Championship hopes with a seven-point victory over Stabannon Parnells on Friday night at Cluskey Park.

The Courtbane were on the wrong end of a heavy defeat in their first outing against Nh Fionnbarra but showed good character to recover from that game as they deservedly came out on top.

It was a strong second half display that saw the Mals through in the end against a Stabannon side who will be disappointed to have suffered their second defeat of the campaign and as a result will not make it to the knock-out stages.

The first half proved to be a rather cagey affair with the teams trading points throughout before going in at the break level at four points apiece.

The Mals hopes were boosted when Stabannon were reduced to 14 due to a black card before the break and followed by a red on 40 minutes. The North Louth side took full advantage with Ronan Greene, Emmet Mullen and Collie Rooney on target they went on to win by seven points.

For the winners, the three Smiths in defence were solid throughout. Conor Begley was impressive before injury, while Ronan Greene had a good outing on the 40. Collie Rooney and Jamie Kelly caused problems inside and contributed well to the scoreboard.

Two late points from William Woods held off a spirited challenge from Wolfe Tones as Nh Fionnbarra made it two wins from two with victory at Darver on Sunday afternoon.

The Barrs started brightest and raced into the lead, with a good point from play by William Woods with the first attack.  He followed up with a point from a free on six minutes.  The Tones kicked the next two points from play to equalise on 14 minutes from Emmet Judge and a Niall Smith ‘45’.

Once again the Finbarrs made the brighter start to the half with two good points from play by Thomas McCreesh and William Woods to extend their lead.  Two points by Darren Weldon were cancelled out by two further Woods scores, leaving the Togher men four  points to the good with 11 minutes gone in the second half.

It looked like the Barrs might push on at this stage.  However, shortly afterwards Oisin Madden received a straight red card for an off the ball offence and with that the Finbarrs were down to 14 men.

After Weldon and Shevlin traded points, Weldon and Mark Healy pointed for the Tones to leave just a point between the teams.

A possible upset was on the cards but Woods eased the nerves at the other end with the last two points of the game to seal the win.